Note: The below account was written in 2007, days after the event in question. Excerpts have appeared here and there, but this is the first time the entire piece has been published.

The convention is over, but while we’re in the neighborhood, so to speak, we decide to swing past some of the Heinlein sights of the area. We’ve already done Union Station, and now we head for Swope Park, featured in Time Enough for Love. It’s a very big and lovely park, and Deb and I make sure to take a few pictures of us standing next to the entrance sign.

Then it’s about another hour south down US71 to Butler, Robert Heinlein’s birthplace. On the way, my cellphone rings. It’s Audrey –they’ve settled with the hotels soon enough to make a trip to Butler possible, and will meet us at the library.

There are three or four signs in town leading to the street on which the house where Robert was born still sits. It is his Grandfather Lyle’s house on Fulton Avenue. The city has placed the road signs, but the current owners of the house do not have a sign in front of the house. Reportedly they are concerned those whacky Heinlein fans will think there’s a shrine of collectibles inside or somesuch, and thus might try to break in. So, if you go, follow the signs, and when the signs run out, look for the only house on the block that looks remotely old enough to have been around in 1907 –but don’t knock on the door, as there’s nothing in particular to see inside other than nervous home-owners.

Then it’s off to the Butler Public Library. In 1980, Butler had invited the prodigal son back for a “Robert Heinlein Day”. Possibly on that trip Robert and Ginny decided the town library could use a little help. At any rate, shortly after Robert passed away, Ginny formed the Robert A. and Virginia Heinlein Foundation to “enable the renovation of the library, construction of a new wing, and further provisions for ongoing maintenance and other continuing assistance.” On the side of the new wing, below “Butler Public Library”, is also “Robert A. & Virginia Heinlein Addition”. A plaque in the entryway also credits the Foundation’s role in the 1991 unveiling of the renovated and expanded library.

This is the first time I’ve been here, but such is not the case for Deb. She was here in 1993 as part of that first Heinlein Forum Gathering at the nearby Truman Reservoir.  To my eye, the building is handsome and well-cared for. The Addition is most of the library stacks proper, with the older section now being a nice community activities room. In the middle, across from the entry, is the “Robert A. and Virginia Heinlein Reading Room”. Amongst its contents are the library’s collection of Heinlein books available for patrons to read, various collectibles secured in glass cases, plaques on the walls from the government of Missouri recognizing the Heinleins, and a lovely Frank Kelly Freas portrait of Robert and Ginny that belongs to Jim Cunningham and is on loan to the library.

We meet Linda Hunter, the library’s director. It turns out that Linda was at the convention on Saturday, but we did not meet her then. Since we haven’t given the library any warning of our coming, she’s a bit surprised to see us and receive the news that Jim Gifford of the Centennial convention is also on his way and has a present for them. Linda recovers quickly, and gives us a tour of the library, including playing a radio interview of RAH from the 1980 “Robert A. Heinlein Day” in Butler. In it, Robert mentions that he never talks about an Earth city in his works unless he’s been there himself –this is why Kansas City makes multiple appearances, for example.  Then Linda digs out their Heinlein scrapbook for us to page through. Amongst various newspaper articles and pictures of the 1980 and 1991 festivities, there at the end are the pictures of the visit of the Heinlein Forum in 1993. I point them out to Deb, as she’s clearly recognizable in the pictures.

The Giffords arrive, and Jim explains to Linda that he’s brought the large “Robert A. Heinlein Centennial” banner that hung from the main event stage all weekend to present to them. This would be the banner that hung immediately behind Michael Griffin of NASA, Peter Diamandis, Brian Binnie, and the entirety of the Gala Ceremonies, amongst other events. Jim borrows a Sharpie and adds some provenance information on the back of the banner for future caretakers. Then we all troop outside to take pictures while Linda and Jim hold up the banner immediately below the “Robert A. & Virginia Heinlein Addition” sign on the side of the building. 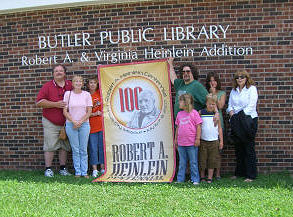 All four of us being hopeless internet geeks of long-standing (remember, that’s how we met in the early 90’s before there even was a World Wide Web!), we ask Linda if BPL has a website, email addresses, etc. She admits that they do not. The four of us resolve to do something about that, and you can see the results at www.butlerpubliclibrary.org While we’re there, we also all join the Butler Public Library, paying our $5 like anyone else for a lifetime library card. This creates another brainstorm, and probably some day soonish interested parties will be able to support BPL by purchasing a special commemorative edition of the BPL library card featuring the Frank Kelly Freas portrait of Robert and Ginny. Jim and Audrey promise to send copies of Nitrosyncretic Press’s Heinlein works for BPL’s stacks, and remembering that advertising for The Virginia Edition has included mention of a significant discount for library sales, Deb and I resolve to make sure BPL has The Virginia Edition available for its patrons to read.

But now it’s really time to head back to Minnesota, and we take our leave of Butler and the Giffords. It’s been a great long weekend, and for those of you who were not so lucky as to be there, I hope you’ve had at least a portion of the fun reading about it that we had in living it.