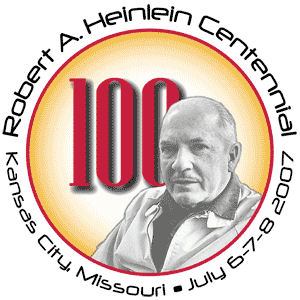 The Heinlein Centennial in Kansas City, Missouri in July 2007 was an event created and sponsored by an independent association of Heinlein scholars, fans, readers and admirers. Its purpose was to give all those interested in Robert Heinlein, his work, his life era and his influence on many fields a place to gather and celebrate the centennial of his birth by sharing information, reminiscences and the pleasure his efforts brought to each participant.

The Kansas City event had wide scope, from the traditional science-fiction fan viewpoint to serious literary investigation of Heinlein’s work and techniques, as well as inclusion of the burgeoning commercial spaceflight industry that so closely represents Heinlein’s fictional history of space development. No one lucky enough to be there would call it anything but a smashing success on all counts.

The Heinlein Centennial was an entirely volunteer-driven event and no person or institution outside those providing commercial goods and services were compensated or remunerated in any way. Every member of the senior organizing staff paid his or her own way, including event registrations, hotel rooms and travel, as did many of the general event volunteers.