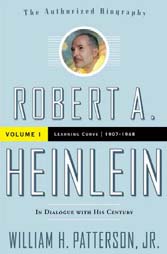 Let me be honest: there is really no way that I can be objective about this book. First of all, this is an unprecedented biography in the science fiction field; nobody has ever really produced anything like its devotion and depth of a Golden Age of Science Fiction writer. Wells and Burroughs, yes; Clarke and Bradbury have had largely failed attempts, which stopped at single volumes. Other writers have had reasonable biographies written of them, including Alice Sheldon and Anne McCaffrey in recent years, but those remain preliminary coughs (the Tiptree biography is good, but feels incomplete to me, and to at least one major SF writer, who complained that the author hadn’t even bothered to talk to the CIA about Sheldon’s employment there). The new H. Beam Piper and C.M. Kornbluth biographies are worth reading, but marked by amateurism and unanswered questions.

I exclude Asimov’s extensive autobiography from comparison, but then, the man never did stop talking about himself, with charm and joy. There were very few secrets kept behind the public stage, and those have been revealed since his death in various places.

But Robert Heinlein deliberately hid his private life from his public, and then bedazzled us for decades with his fiction, an enchantment that remains, one assumes, for those reading these words.

We have always wanted to know the facts.

Which leads me to my second reason why I can’t be objective: I know too much. Having been involved in the research, both tangentially and deeply, I know how much has made it in, and what was left out, and why. Whatever I might have to say about the book is going to be tempered by my firsthand knowledge of the decade of work that went into its writing, rewriting, editing, and presentation to the public. I was a reader of the original manuscript, an early critic of its faults and omissions, a sometimes thorn in the author’s side for more than one issue.

And there’s the third reason: the author is one of my best friends, my co-writer, my editor, my constant correspondent, occasional passenger and dinner guest (not usually at the same time), and I have nothing but the deepest respect and camaraderie for him, both personally and professionally.

So, that said, let me make a desperate attempt to be objective, and to somehow avoid the accusation of writing a puff piece.

Let’s start with this: this should have been me writing this book. Bill got to Ginny Heinlein a handful of weeks before I did, and I shall never forgive him for being smarter, faster, and more prescient than I in somehow tricking Ginny into asking him to write the book.

The bastard is just slippery that way. I’ve had to get used to it over the years. You will too.

Ah, well. I grit my teeth, and I say this: It’s a far better book than I would have written, and done far sooner than I could have done it. Bill has devoted his life to this project, while I had to go off and procreate. Twice. Diapers and homework and my refusal to ignore my children would have doomed me.

But that title….Oh. My. God. Love that “Learning Curve”, but the rest? Bill clung to that title, in all its glorious awkwardness and utility, as a means of connecting with readers down through the years who would not know who Heinlein was if they didn’t see him talking with his century. Bill is stubborn that way; once he has his teeth on the bit, he won’t let go until the ride is completed. Bill, you won the battle of the title; I will just have to content myself with saddling you with long and cumbersome titles on every article I write for you in petty revenge.

And if the biography has another flaw, it is an almost complete lack of critical analysis. Bill himself has agonized over that, and it has been a complaint from several reviewers. But had he included the critical analysis of the works, we’d be in 1941 at the end of volume 1, and looking forward to three more volumes, instead of just one. This is a measure of how important Heinlein is….and how much Bill has to say about the subject. (Stay tuned; Bill and I are writing a critical analysis of the Heinlein canon as our next joint project…I intend to title it myself…).

There are minor nitpicks to be made, and Bill has been mortified by how many silly small errors crept in over the years. He has posted a list of them on his author’s website, and a discussion of them can be found on the Nexus Forum on the Heinlein Society website. None of them are major, and only a small handful concern Heinlein himself. One of the great strengths of the biography – and something Bill worked on extensively in the editing process – is its intensely convincing rooting in the documentary evidence. Whatever speculation remains in the book is minimal, and duly noted in the endnotes, which are copious and well-worth reading in and of themselves.

The book reminds me of no other work so much as Carlos Baker’s famous biography of Ernest Hemingway. For decades, it was the single inescapable biography. I suspect this biography will gain the same status as well, even as a wealth of new information is revealed as a result of its publication. I recall years ago hearing Ella Fitzgerald’s biographer complain on NPR that the problem with biography is that all the good stuff comes out after the book is published, as people come forward with new information and evidence both anecdotal and otherwise. Bill has already been contacted by those who witnessed some of the events in this book, and still survive – previously unbeknownst to him, or anybody else involved in Heinlein research. A revised edition is unlikely, but already seems necessary, given the wealth of new data. Note to Bill: I would also love to see a greater sense of context, particularly of the early days, of the Progressivism of his childhood, and the culture of Missouri and Kansas City and Los Angeles, in the revised edition.

Without delving into the summary that seems to be the mainstay of reviewers of this book – why is it so few of them seem to be able to say anything other than telling readers the plot, or making inane comments that seem to reveal their own failed reading skills? – I would say that this biography is very capable, readable, and compelling. I found myself engrossed in reading the uncorrected proofs (indeed, I stole the author’s copy to do so….), despite my repeated involvement from the earliest days of the manuscript. There is a clarity of presentation now, which was at times lacking in earlier drafts. Rewriting, as great writers know, is the heart of writing.

The Robert Heinlein that emerges from these pages is, indubitably, the one we expected. Only more so. His time at the academy, and serving with the Navy, is particularly well-executed. The surprises of his first love, his first wife, and the marriage to Leslyn are all relatively complete, given the destruction of much of the evidence by Heinlein after the collapse of his private life after WWII. (time travelers, please make a note: break into Heinlein’s house when he is in Philadelphia during WWII, and make complete copies of all the correspondence, poetry and other paraphernalia stored in the room above the garage in the Laurel Canyon home.) The divorce from Leslyn, the courtship with Ginny, and the changes of the writing career are particular strengths. The pictures are revelatory.

In short, I cannot imagine a Heinlein fan who will be disappointed in the book, other than having to wait for volume 2, which is going to be difficult. Good news: the editing has already commenced, and should prove to be a shorter wait than the decades we endured for the first volume.

Now, pardon me. I’m going to go read it again. And plot my revenge on the man for getting to Ginny first. And for writing such a damn good book, thus making it highly unlikely anyone will ask me to write a new version for at least two decades. And for cooking better than me. And dressing better than me. And having more hair than me. And owning Heinlein’s hats. And…and….and. Oh, forget it. He’ll just foil my plots anyways.

Author Bill Patterson is currently working on the Volume 2 editing