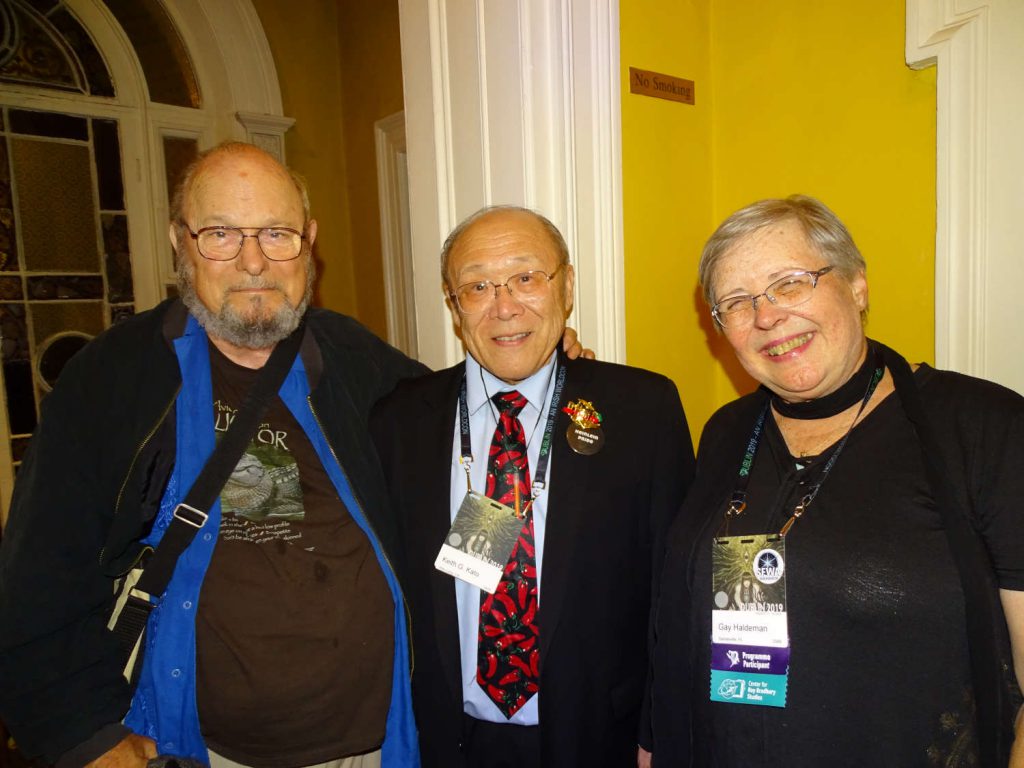 Here are some photos of what we got up to in Dublin!

Riverdance.  On Wednesday 14 August (the day before Worldcon officially opened), 14 Heinleiners made their way to the Gaiety Theatre to see the 25th Anniversary production of the famous Irish dance show Riverdance on its home turf in Dublin.  Our group gathered at Sinnott’s Bar at 5:30 PM for dinner, including a few there just for food and camaraderie, and not the show.  Sinnott’s put our group into four smaller tables that sat only four diners each.  Early arrivers naturally clustered together to talk, but migrated to other open tables as more of our party arrived.  The odd thing was, once you placed your drink and food order at one table, that is where your order would be placed and paid for, regardless of where you ended up being seated.

With an imminent 7:30 PM curtain, the group made its way to the theater.  On Google Maps Sinnott’s Bar and the Gaiety Theatre look to be across the street from each other, but in reality both were in a long open air shopping mall, across a 10 meter walkway oppositely facing each other.  The first surprise upon entering the theater was that it looked to be completely sold out, despite Ticketmaster showing maybe half the seats still available only a few days beforehand.  The second surprise was the physically small dimensions of the stage.

Despite the show being repeatedly broadcasted and available on digital media over the years, there is nothing quite like seeing the show live.  Your Humble Reporter has seen a tour version of Riverdance in Los Angeles at least ten times over the years, and the show subtlety changes content from year to year.  What does not change is the absolute exhilaration in the audience at the speed, precision, and unity of the dance corps, plus the acoustic physicality of the steps, a sonic attack literally  (in the actual meaning of “literal”)hitting you in your face and body (albeit augmented by pre-recorded taps and amplification).  The smaller size of the stage did affect the choreography; the number of dancers used in any given set seemed to be two-thirds the numbers I had previously seen.

The story arc, such as it is, largely involves the settlement of the Irish on their Emerald Isle, the Irish Diaspora to America and elsewhere, and their descendants’ return to the motherland.  It has always seemed to me that Irish music can be simultaneously happy and sad, with several examples throughout the show.  The original “Riverdance” number was the Intermission act for the 1994 Eurovision competition, a throw-away piece, but emerged as the only thing people remember.  In both acts there are other percussion dance styles from outside Ireland—flamenco, Russian, and American tap.  There was even a fusion number where six male Irish dancers provide the “castanets” with their feet for the female flamenco dancer.  The Russian participation has always puzzled me until I learned in 2017 the Russians do have a tap idiom in Russian folk dance; it just was not included in Riverdance.  Beyond the various Irish numbers, I personally enjoyed the two openings scenes of Act II:  “American Wake” (before immigrants to American leave, a “wake” is held since they likely will never be seen again), and “Trading Taps” (three Irish immigrant dancers encounter two young black tappers in New York, and engage in a “challenge dance” with much wit and hilarity).

As the show let out, a number of us gathered outside for some quick reactions and excited discussions.  A common observation was that the women dancers—all young, beautiful, physically fit, and amazing dance technicians—nonetheless had “normal” bodies, not the quasi-anorexia one sees in ballet.  Then we parted, since the Worldcon setup was only 12 hours in the future.

Worldcon Opens.  Under the leadership of Vice President-Secretary Herb Gilliland and Emeritus President Mike Sheffield, Thursday 15 August’s setup of The Heinlein Society’s Fan Table was efficiently executed.  As usual, we set out ribbons and THS literature, plus a Have Spacesuit, Will Travel “Mother Thing plushie” based on the recent graphic novel.  (One plushie was raffled off at the recent Annual Meeting, but you can get one at https://www.heinleinbooks.com/.)  Jason Aukerman sat at our table talking and handing out his own literature and ribbons for The Center For Ray Bradbury Studies.

Retro-Hugos.  Later that evening, after the Opening Ceremonies, the Retro[spective] Hugos “from” the 1944 Worldcon, for works published in 1943, were announced.  There were no Heinlein stories on the ballot, but we had “rooting interest” in the nominations for Best Novel (The Weapons Makers by A.E. van Vogt, for our friend Charlene Piper, A.E. van Vogt’s “granddaughter,” actual the biological granddaughter of van Vogt’s second wife Lydia) and Best Short Story (“King of the Gray Spaces” also known as “R is for Rocket” by Ray Bradbury).  The Bradbury story won, so in just his second Worldcon Jason Aukerman got to accept a Hugo.  We think that was in his report to home base.

Worldcon Party.  A tri-hosted party by The Heinlein Society, The Center For Ray Bradbury Studies, and Keith Kato was held on Friday 16 August, 6:00 PM—Midnight, at the Oscar Wilde House, now part of the campus of American College Dublin (“ACD”).  The House is actually the childhood home of Oscar Wilde, and was originally the home and office of his father, Dr. William Wilde.  The House is across the street from, and faces, the Oscar Wilde statue in Merrion Square.

That this party even happened can be attributed to Jason Aukerman.  With barely a month to go, there seemed to be no available venue that was (a) within budget, (b) favorable location, (c) willing to host science fiction fans, and (d) most importantly, willing to allow outside food and drink to be brought in.  The Worldcon committee planned to have Open Parties at the Convention Centre, in rented rooms, but all parties constrained to use the Centre’s caterer, with a common (and limited, and expensive) service menu.  Their plan for Closed Parties was to use the overflow Gibson Hotel, which likewise mandated their (very expensive) caterer, who had never heard of four items in Keith’s recipes.  But Jason sent out inquiries to “non-traditional” locales, and ACD responded favorably.  Their justification was that ACD offered BFA and MFA degrees in creative writing, so hosting SF authors would be well within their charter.  Little did they know….  Interestingly, a few days after deciding on the Wilde House, the local Leprechaun Museum and the EPIC Immigration Museum also responded favorably, but the die was cast.  The Bradbury Center assumed the entire rental payment for the Wilde House.

Despite having an iconic location for the party, the logistics remained challenging.  The Wilde House had neither kitchen nor refrigerator, so only room-temperature consumables (rental equipment, drinks) could be placed there in advance.  From the apartment Keith rented (where a kitchen was) to the Convention Centre (where the Worldcon was) was 30 minutes travel by foot or public transportation; similarly, it was 30 minutes from the Convention Centre to the Wilde House, and 30 minutes from the apartment to the Wilde House.  A temporal equilateral triangle that was convenient to no one.  The alleged kitchen in the apartment supposedly had a full sized refrigerator (no), an induction stove top (no), and a 12 liter/3 gallon stainless steel stock pot (no).  Keith actually had to buy a new pot, which was donated to a local homeless shelter afterwards.

Ultimately, the party happened, with much thanks to Vice President-Secretary Herb Gilliland’s “gaggle” of younger family members helping set up (and later cleaning up).  The Wilde House is a Victorian era home, with no elevators, one staircase up to the party area, and one staircase down to where the only sink in the House was.  Everything—rented tables, chairs, soup tureens, plates, utensils, drinks, ice—hand to be hand-carried up and down the stairs.  Member Heidi Lyshol of Norway bravely/foolishly volunteered to be “Party Manager,” and spent the evening supervising the beverage, food, supplies layout, and as-you-go cleanup.

ACD had asked we take photos of various guests for them to post on their website as a humble-brag on the guests visiting their House.  Member Kenn Bates was assigned photographer duty, and he said over the course of the Worldcon he took over 3,000 photos.  Next to the bar was a bust of Oscar Wilde, which we used as the focal point for VIP photos.  Member, author, and last year’s Worldcon Guest of Honor Spider Robinson attended, as did SFWA Grandmaster/THS Director Joe Haldeman and Gay Haldeman.  SFWA Grandmaster Robert Silverberg and Karen Haber Silverberg made their appearance later in the evening, and despite coming from dinner at Dublin’s only 2-star restaurant near Merrion Square, Bob consumed his usual bowl of hot chili with aplomb.

Our plan was to close at midnight, and even threatened the inevitably hangers-on that we would put them to work.  Clean up took until about 1:30 AM.

Worldcon Closes.  The last day of Worldcon, Monday 21 August.  We tore down, packed, and got Fan Table stuff distributed to whomever by 1:30 PM.  Jason Aukerman left earlier that day to back to IUPUI, where his Ph.D. qualifying exam awaited him.  That’ll serve him right for having fun at Worldcon.  Jason said his exam is not a sit-down exam at an appointed time and place.  Rather, he is given three topics upon which he must write the equivalent of a term paper for each topic, all due in two weeks’ time.  We should expect to see Jason future Worldcons representing the Bradbury Center; his contract explicitly says he must attend each year’s Worldcon in perpetuity. 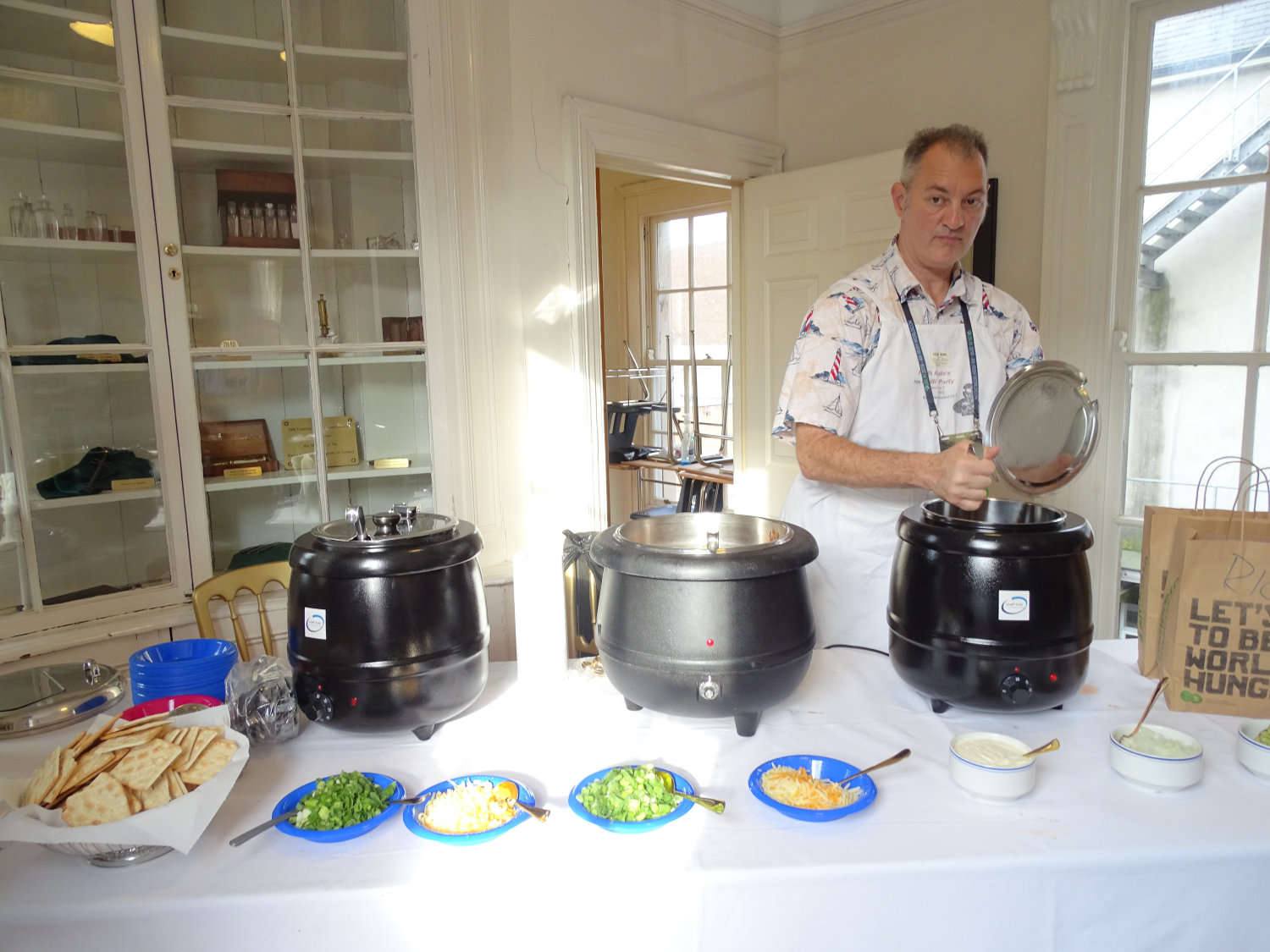 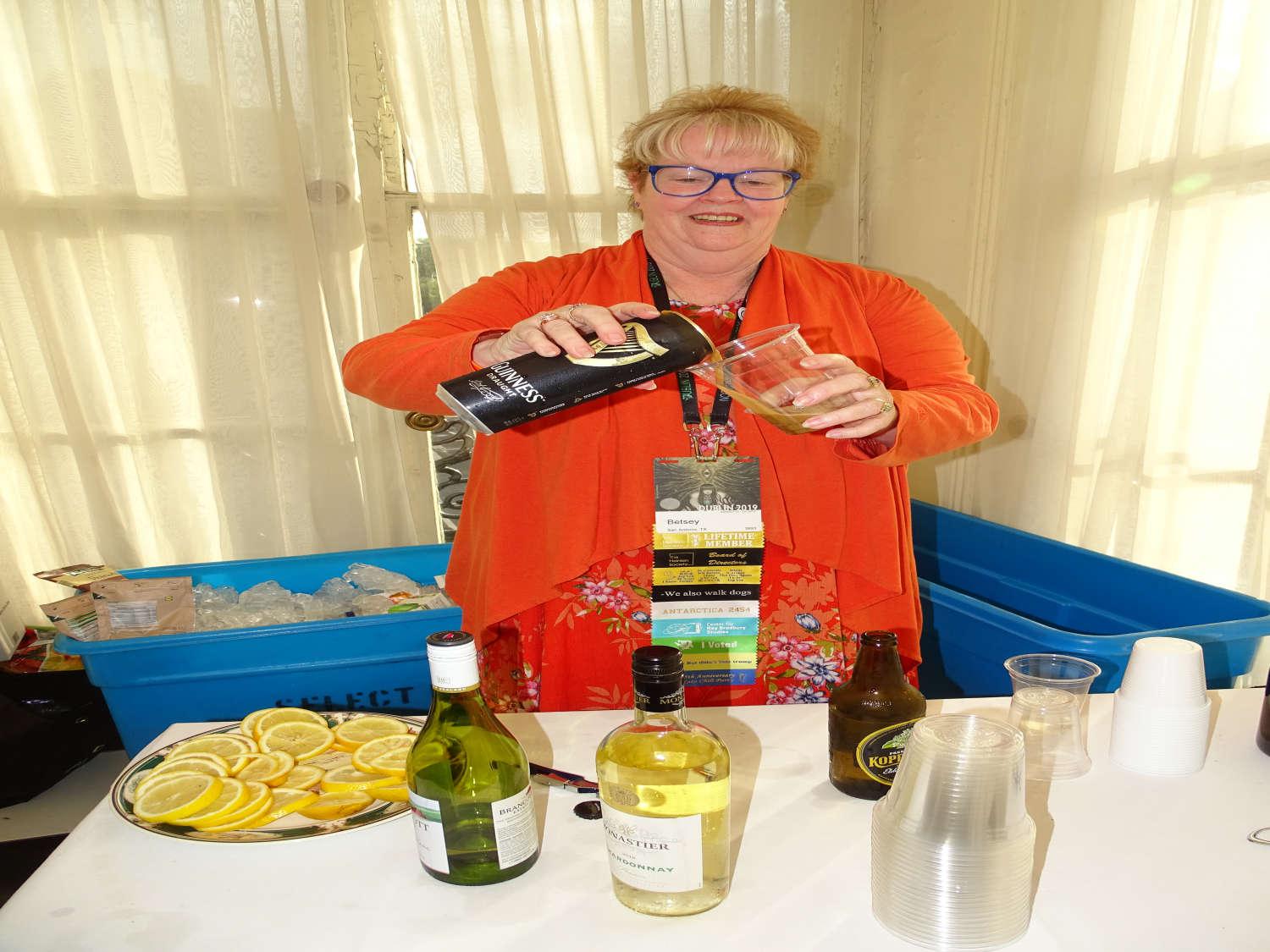 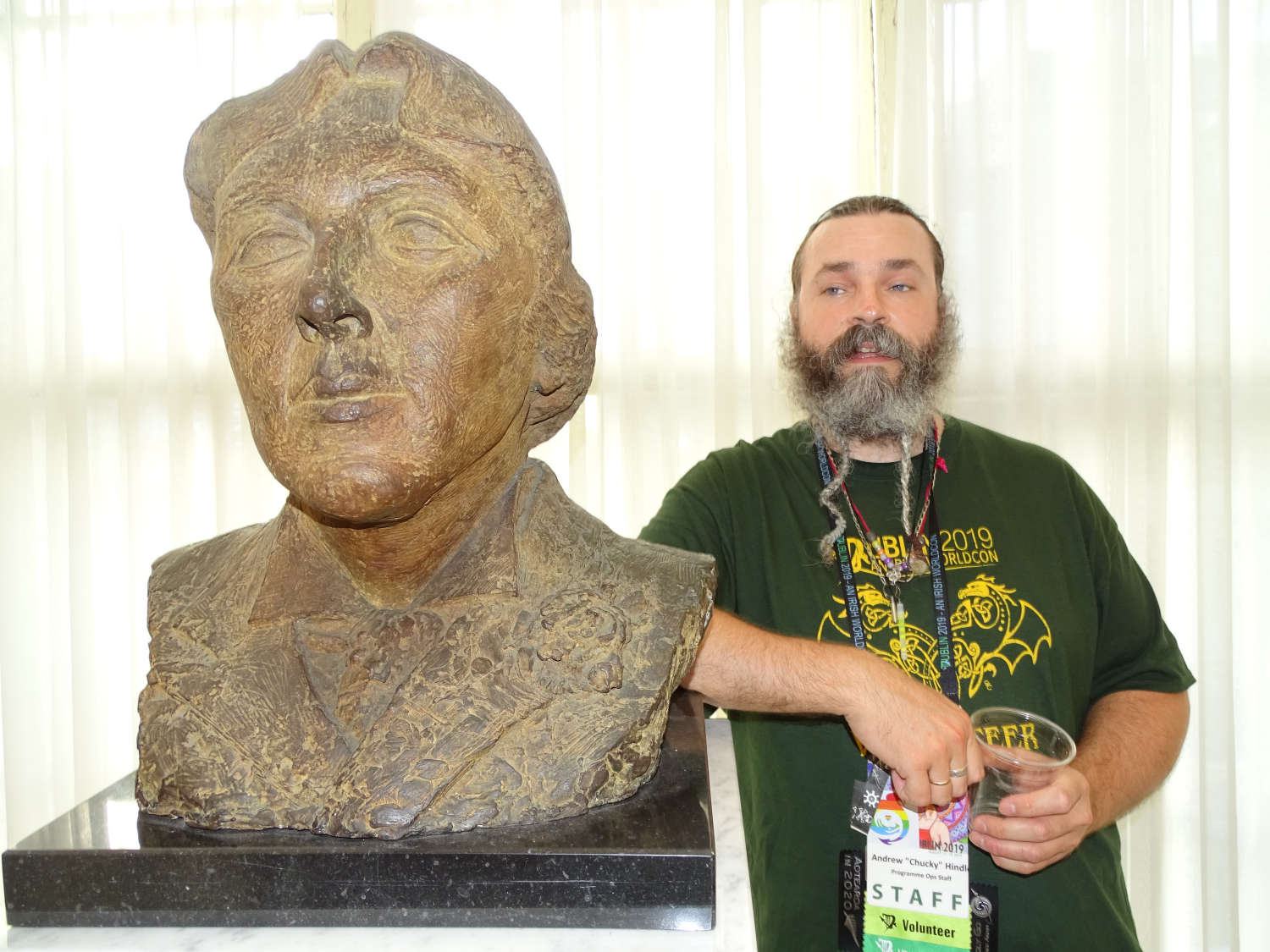 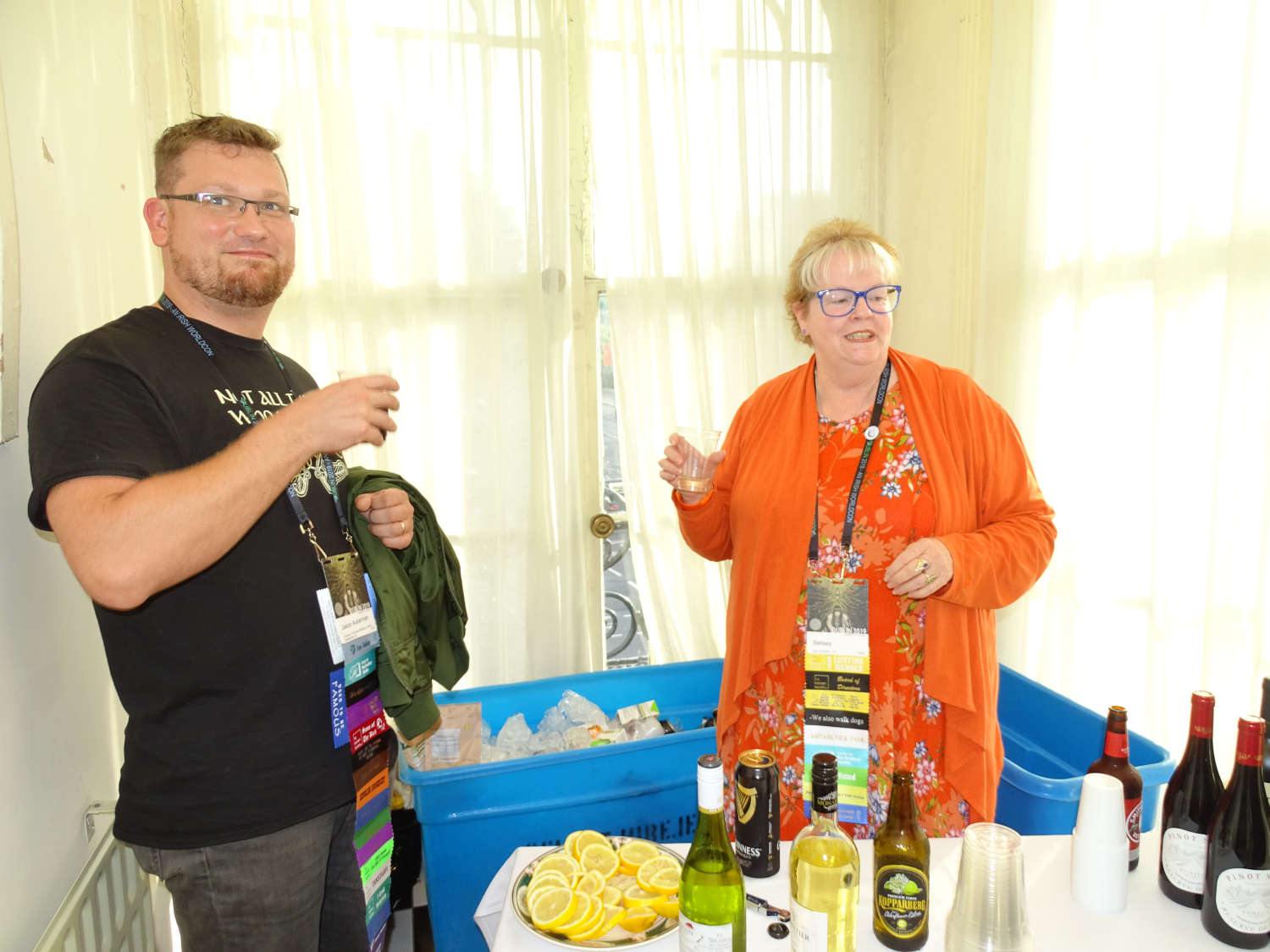 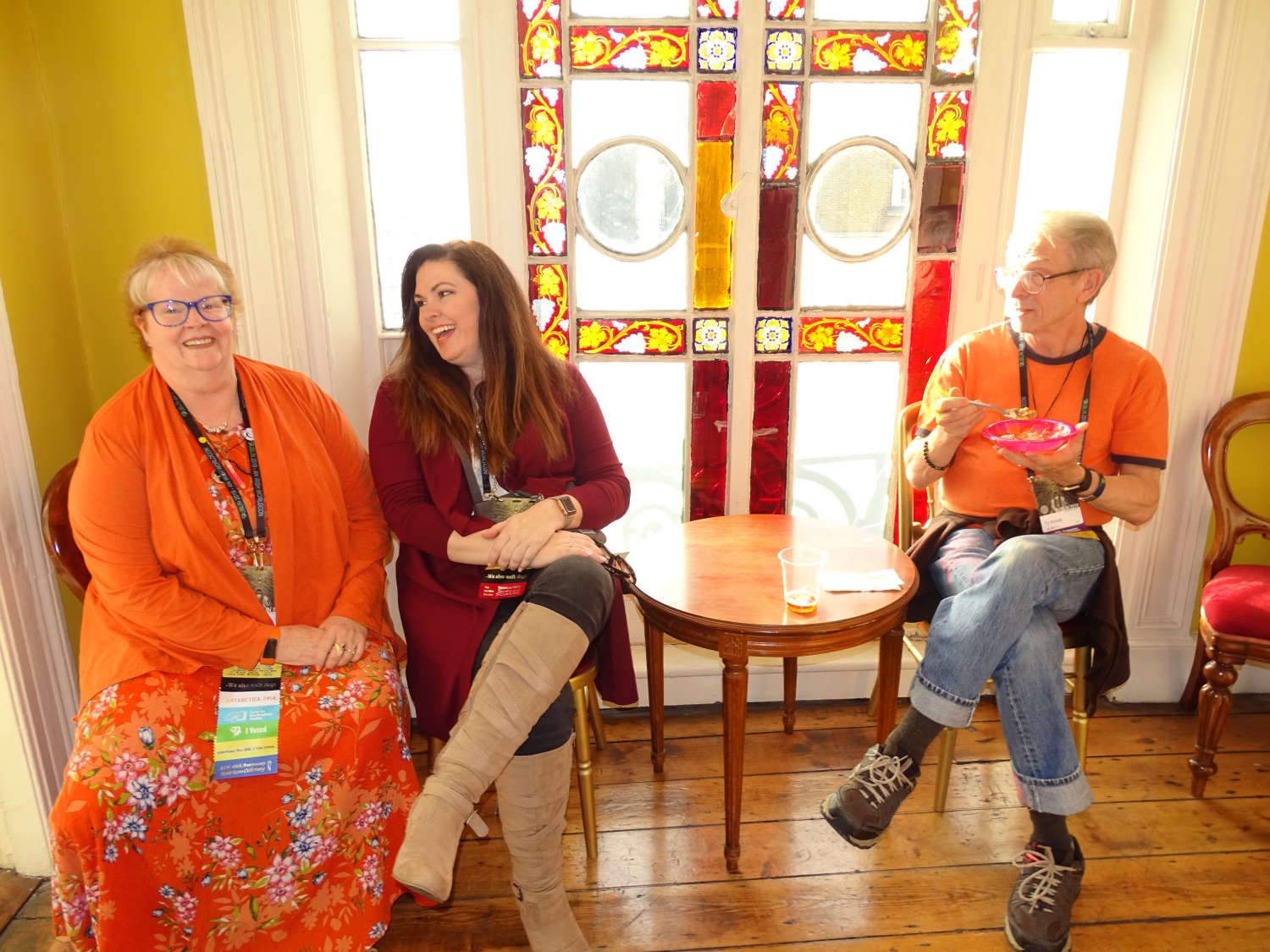 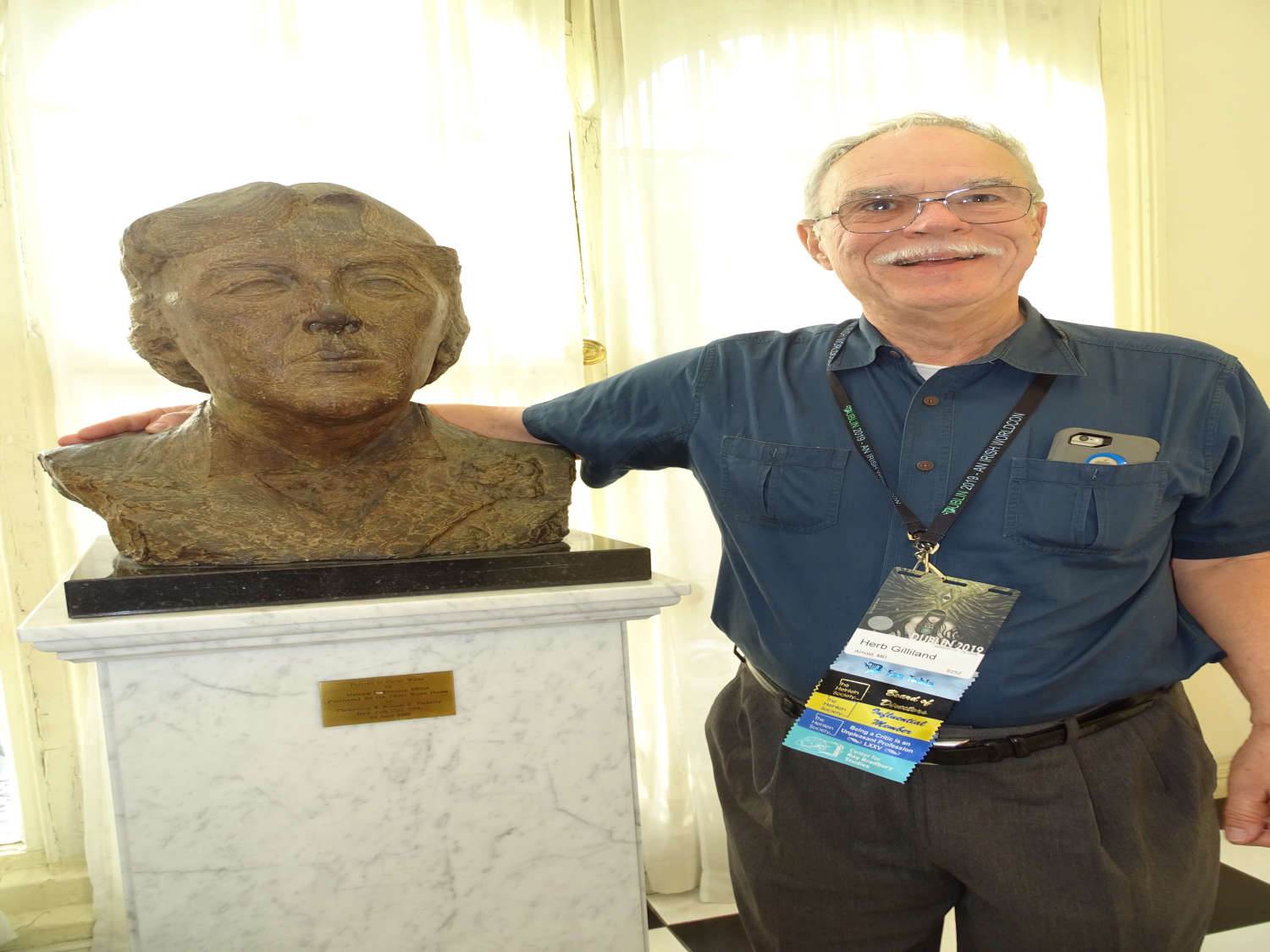 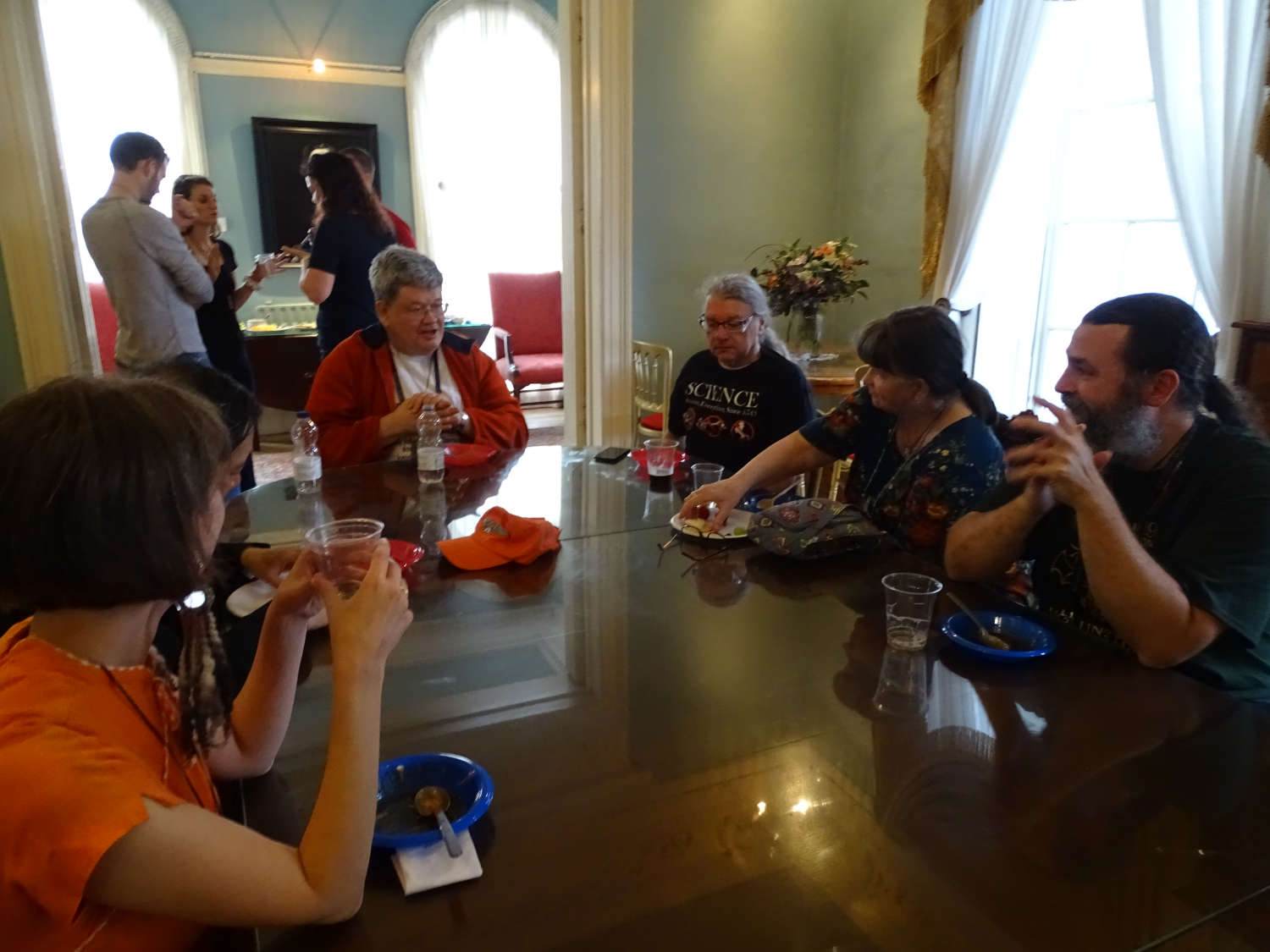 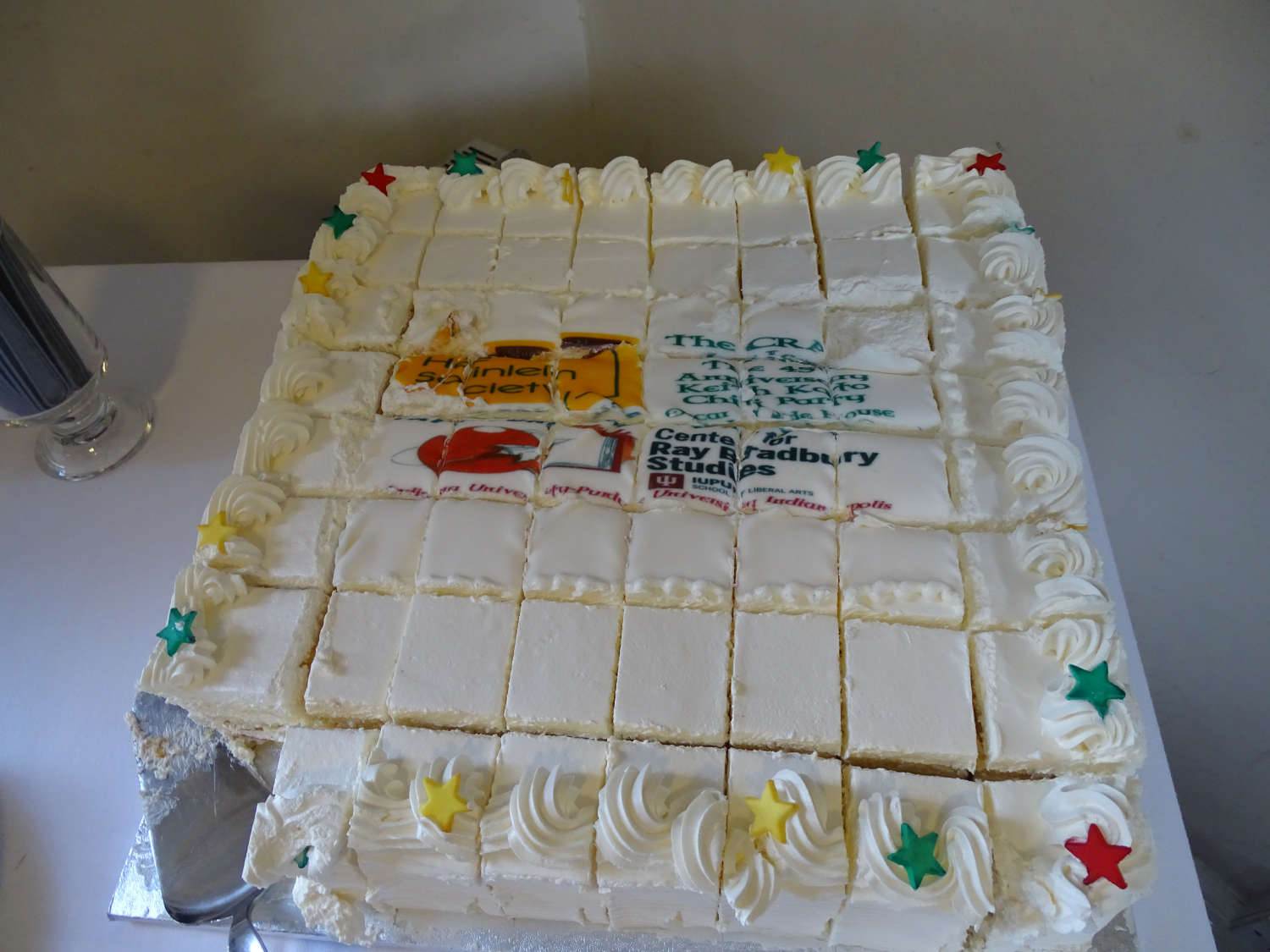 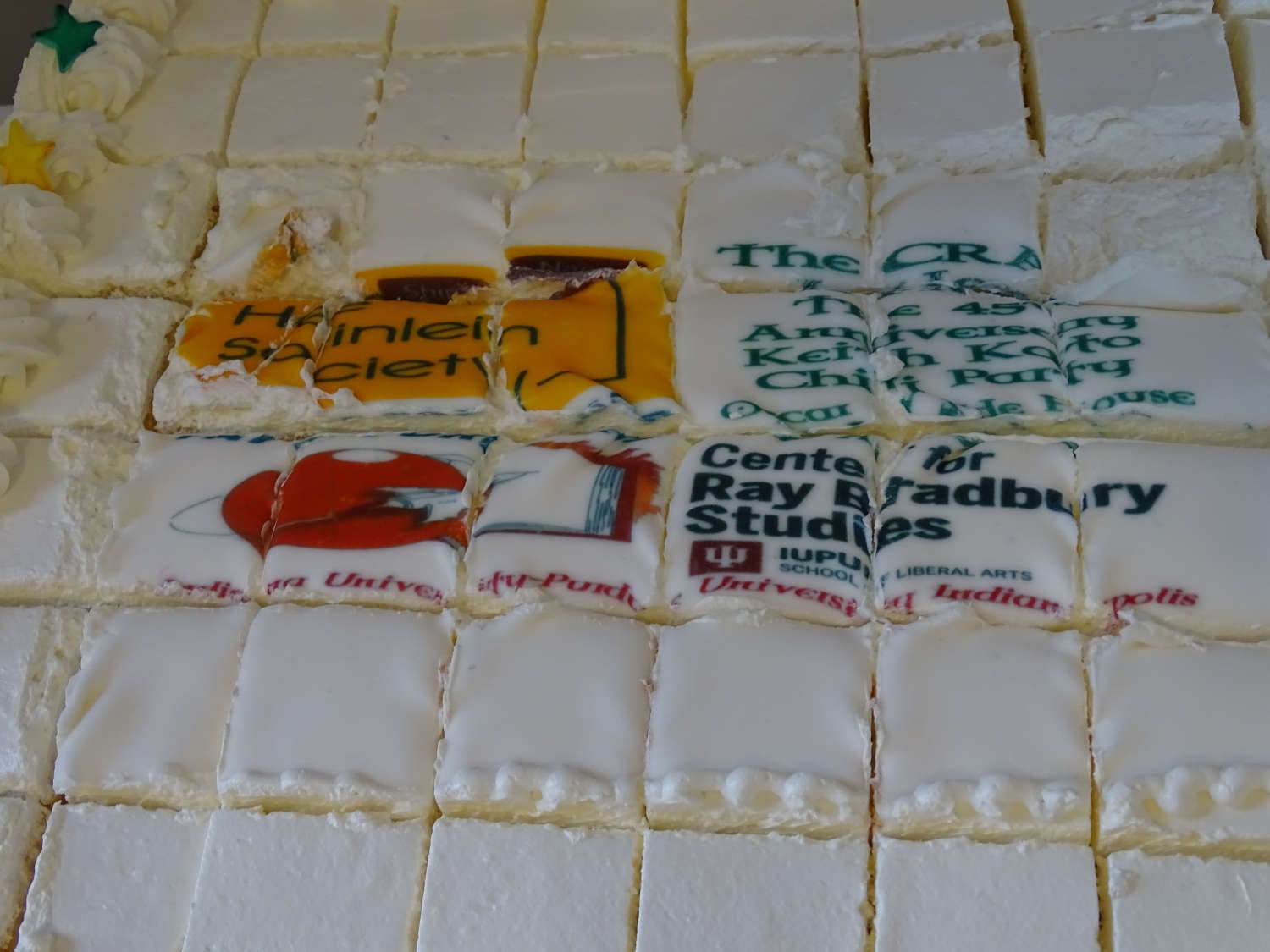 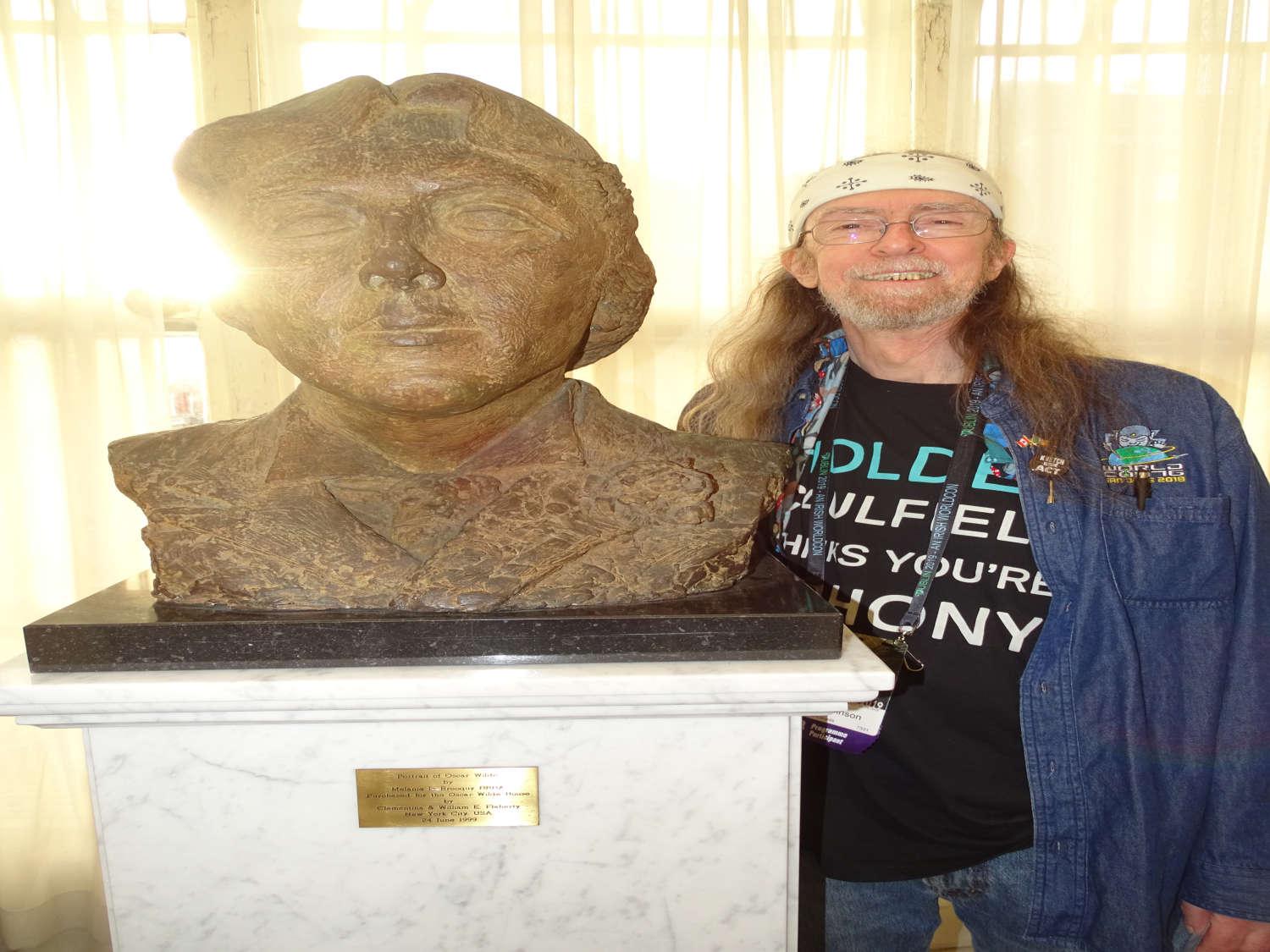 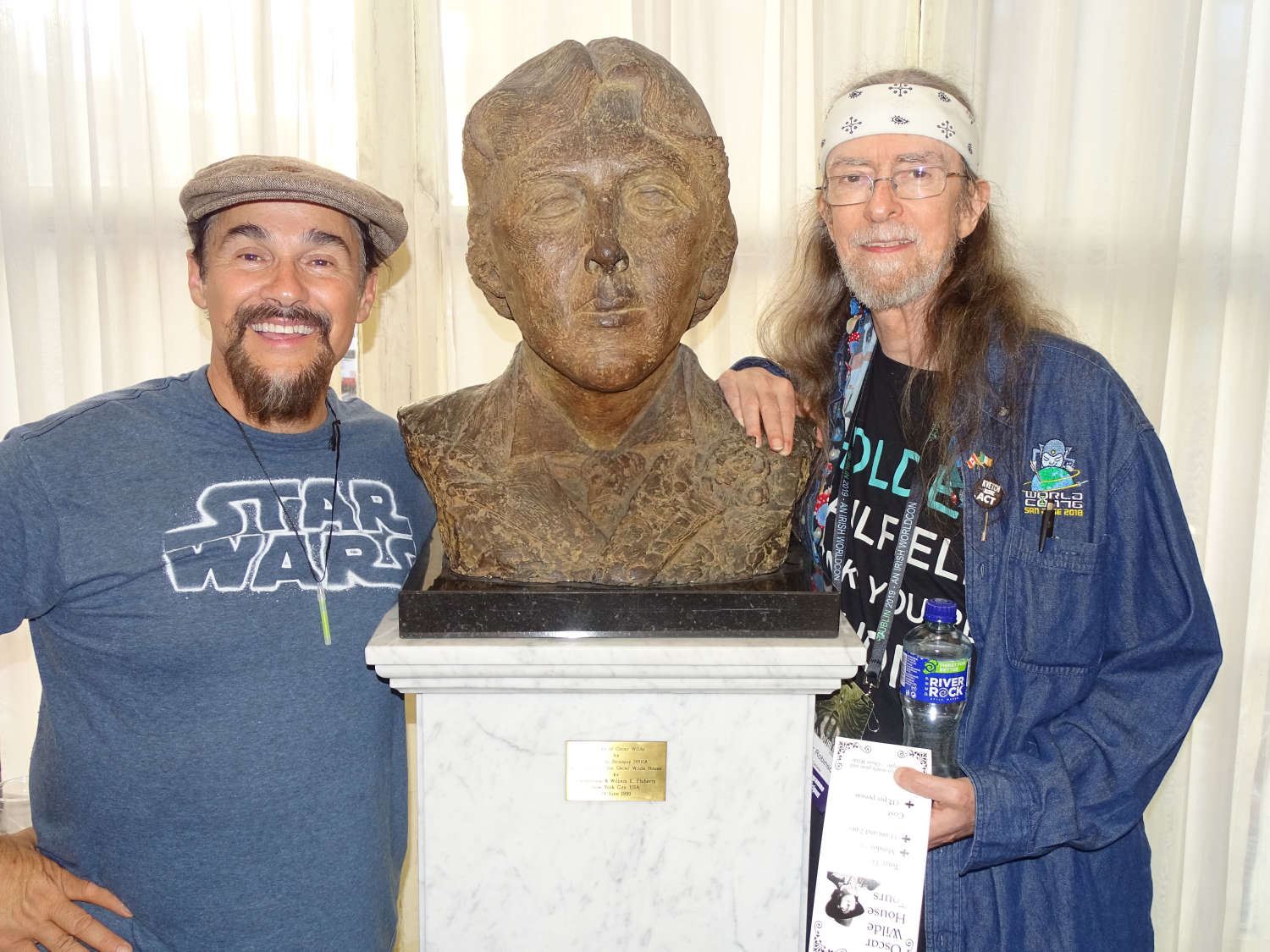 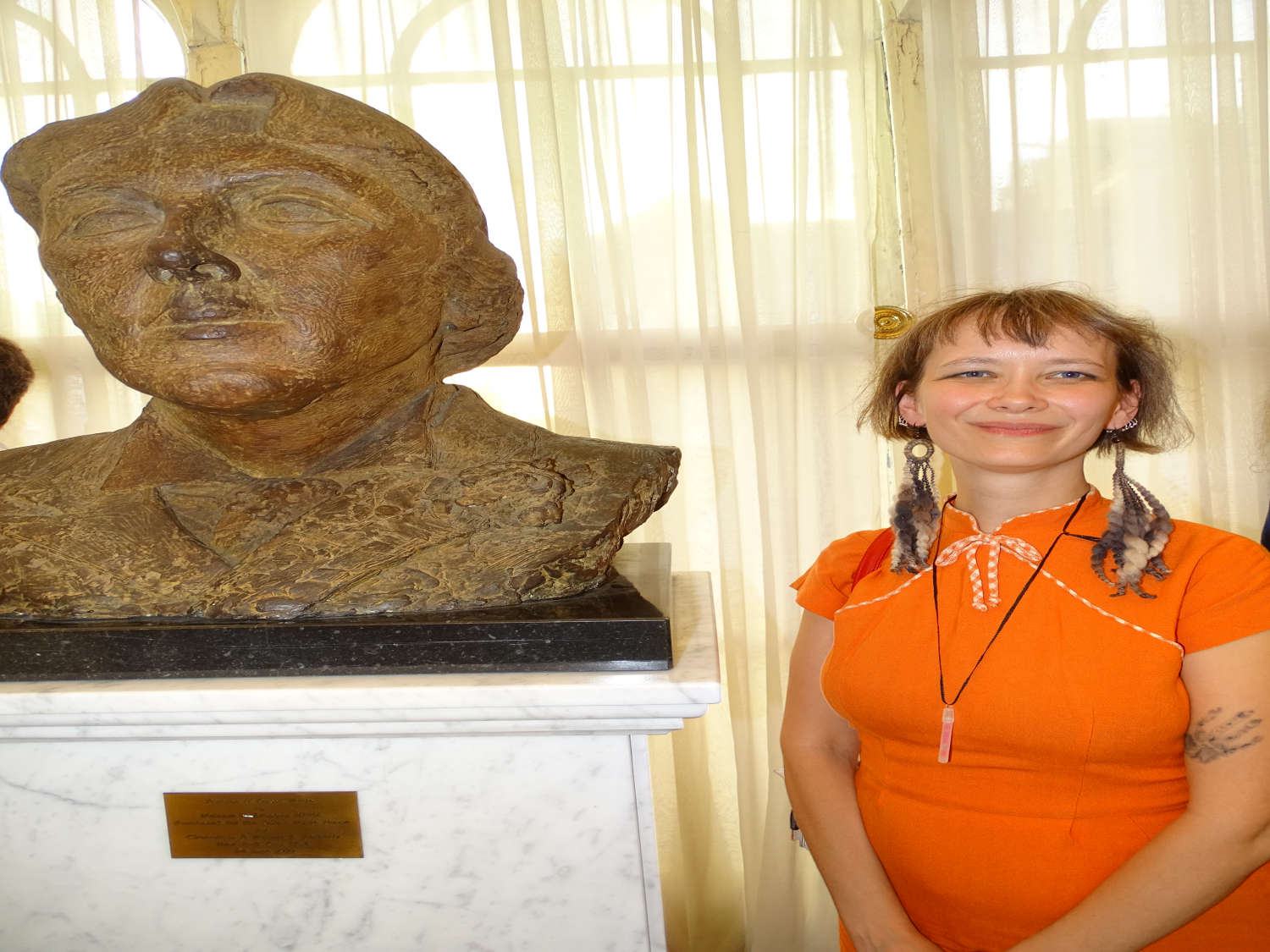 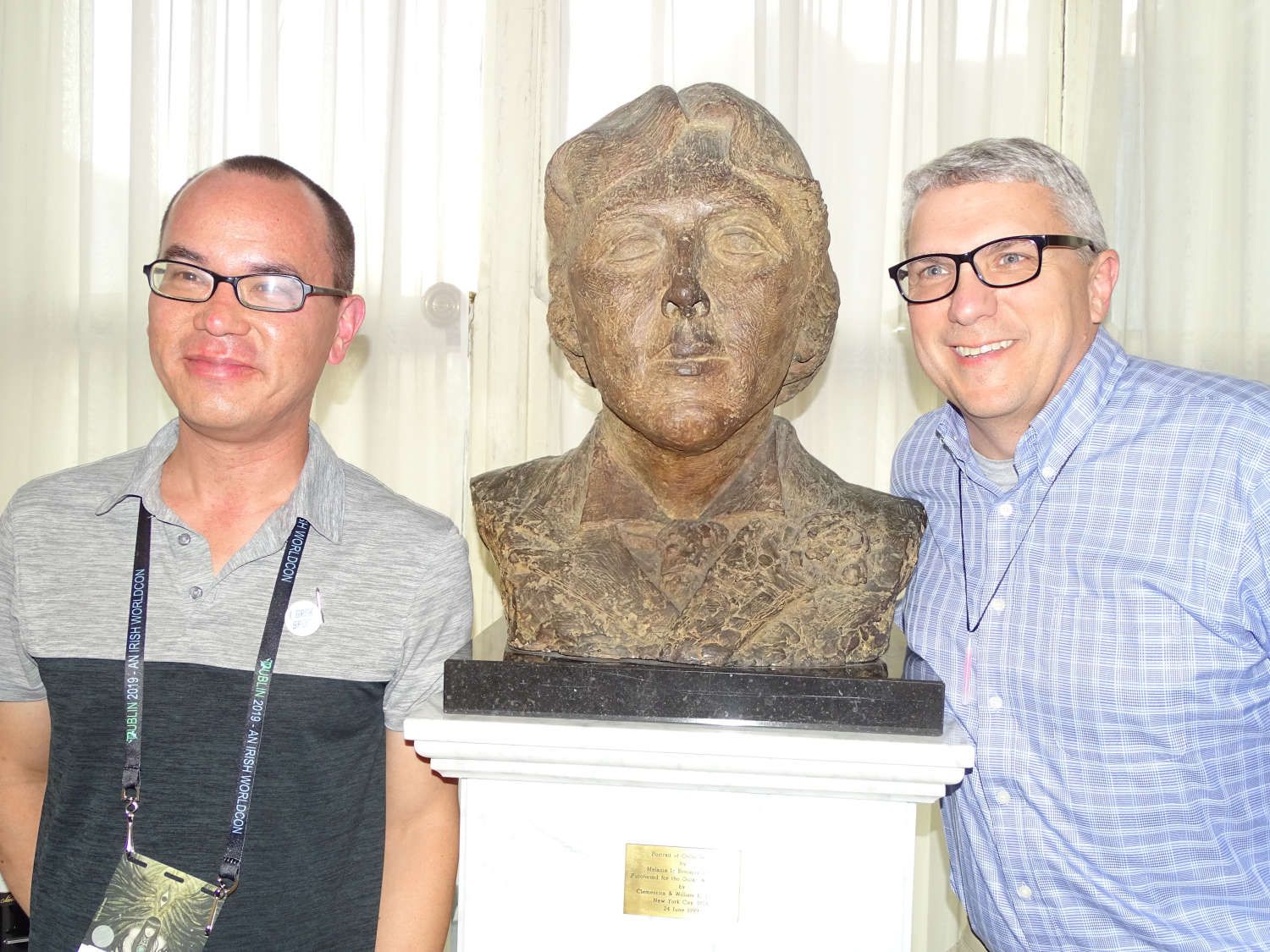 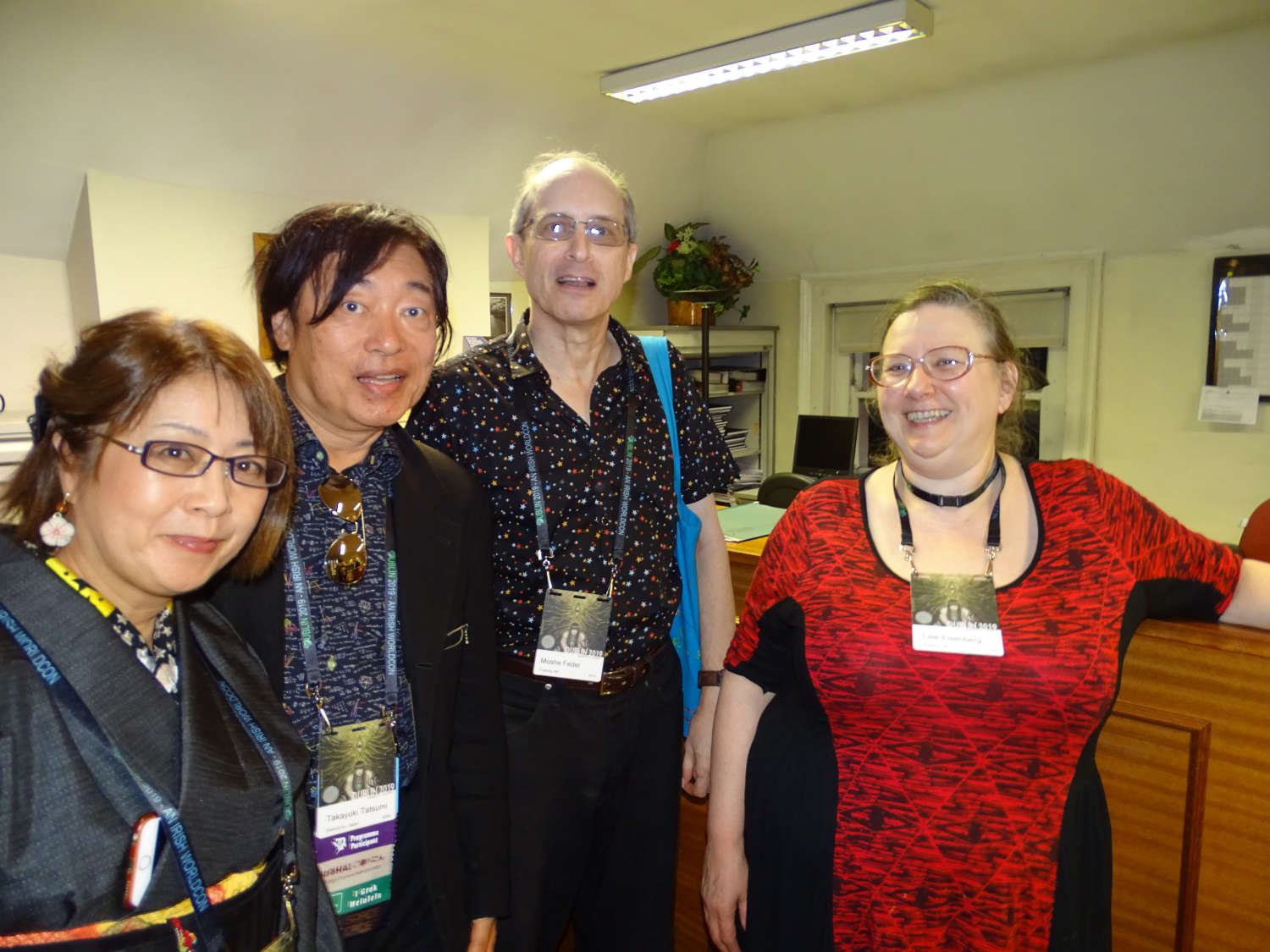 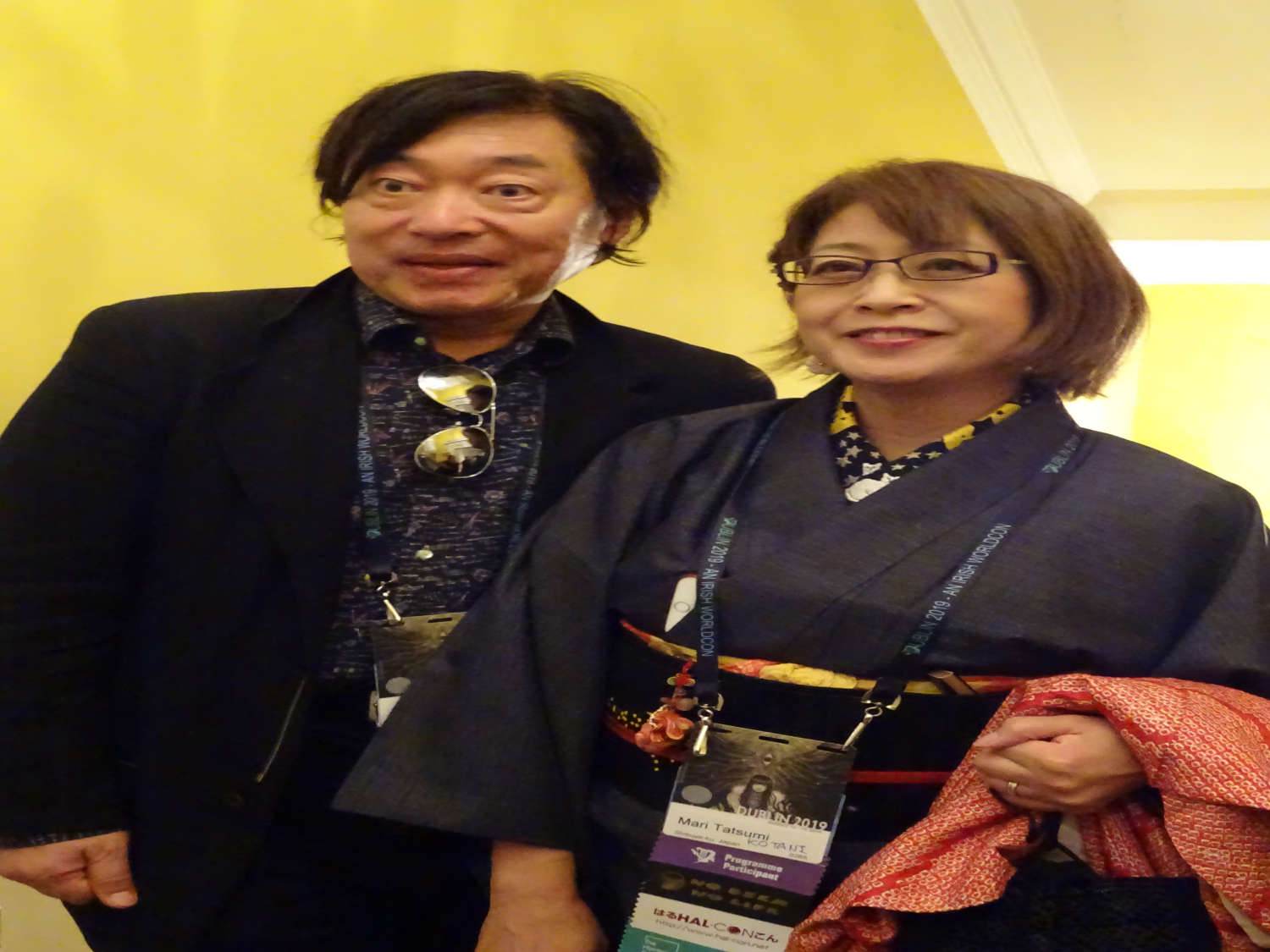 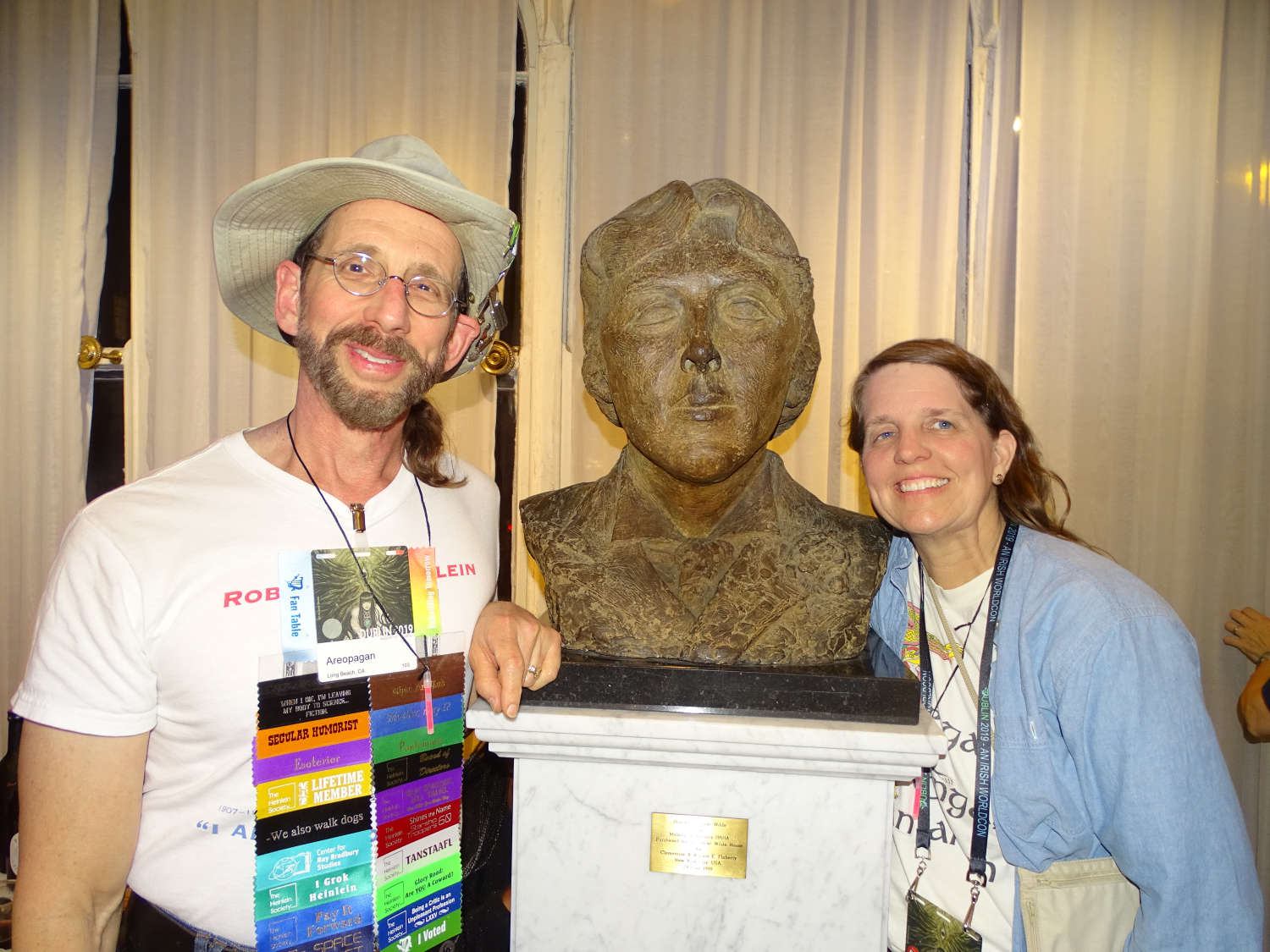 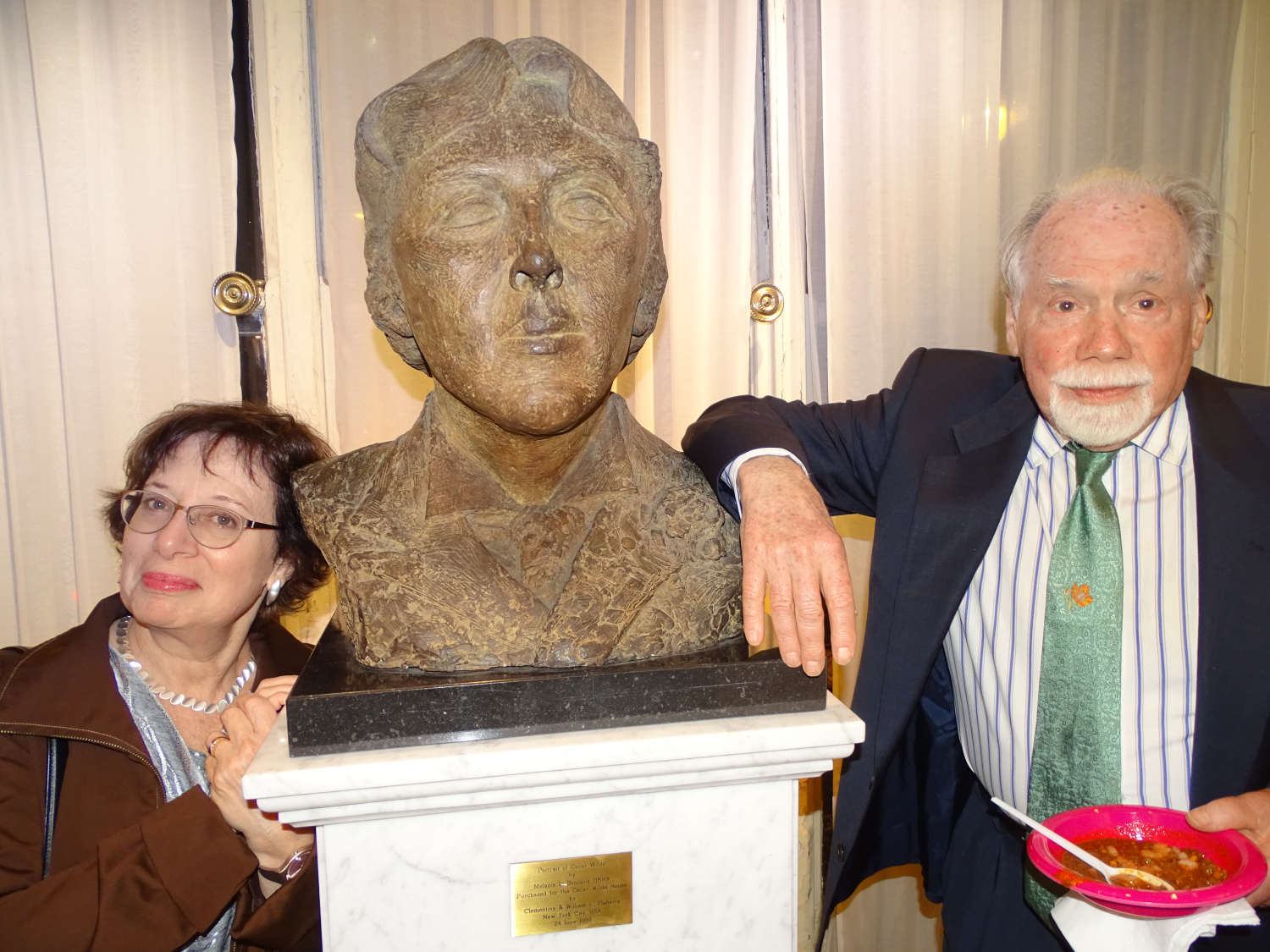 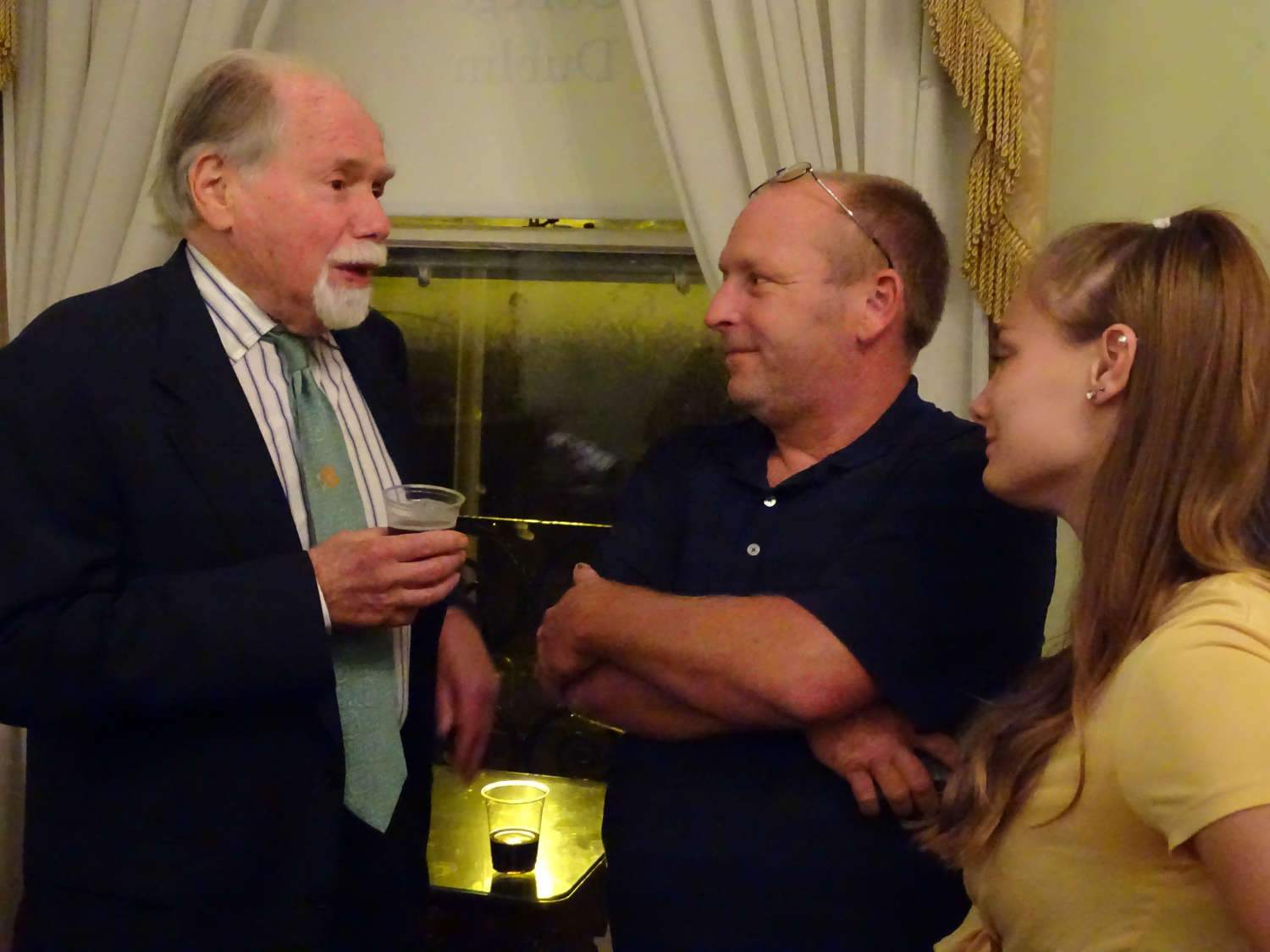 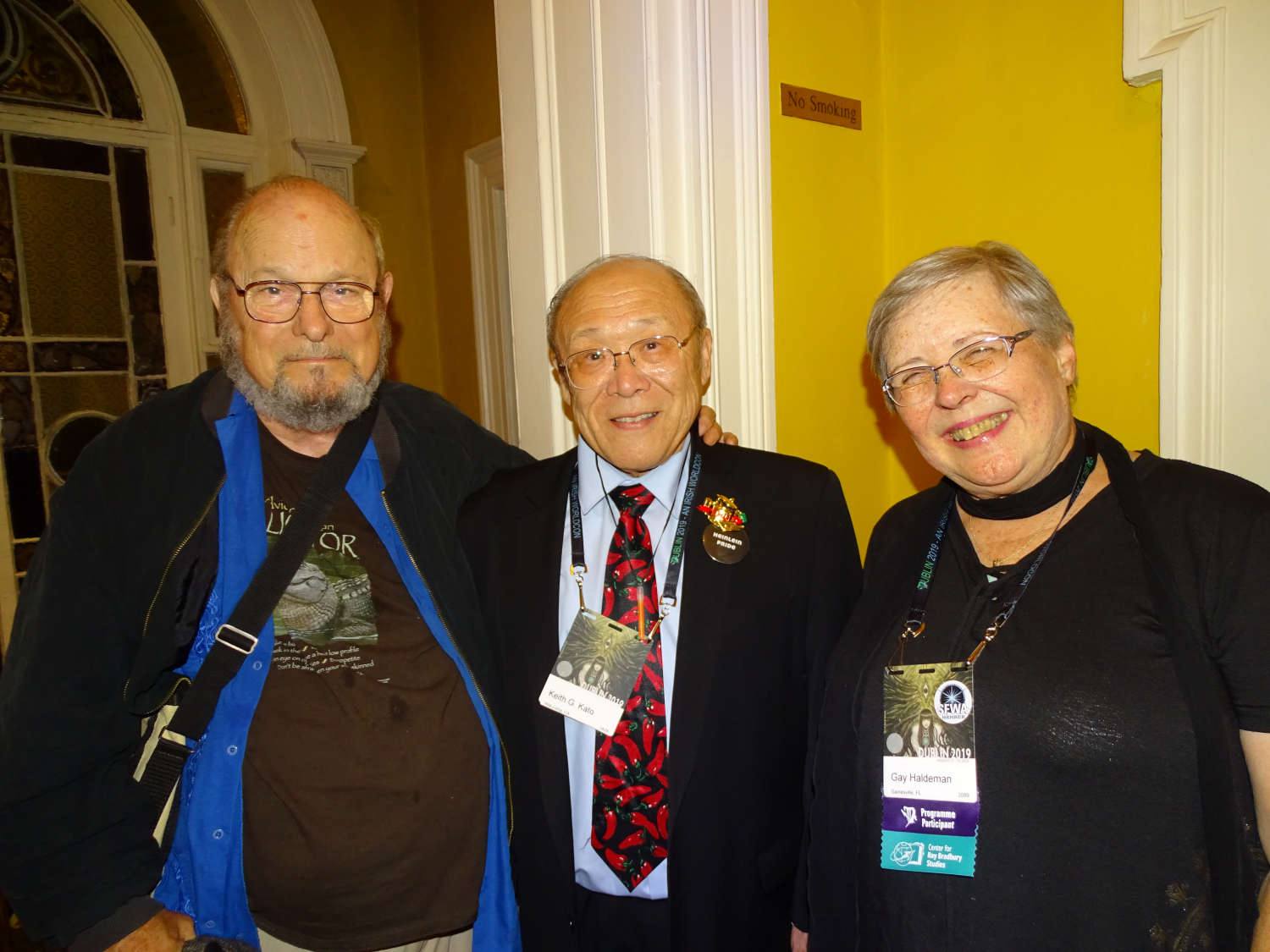 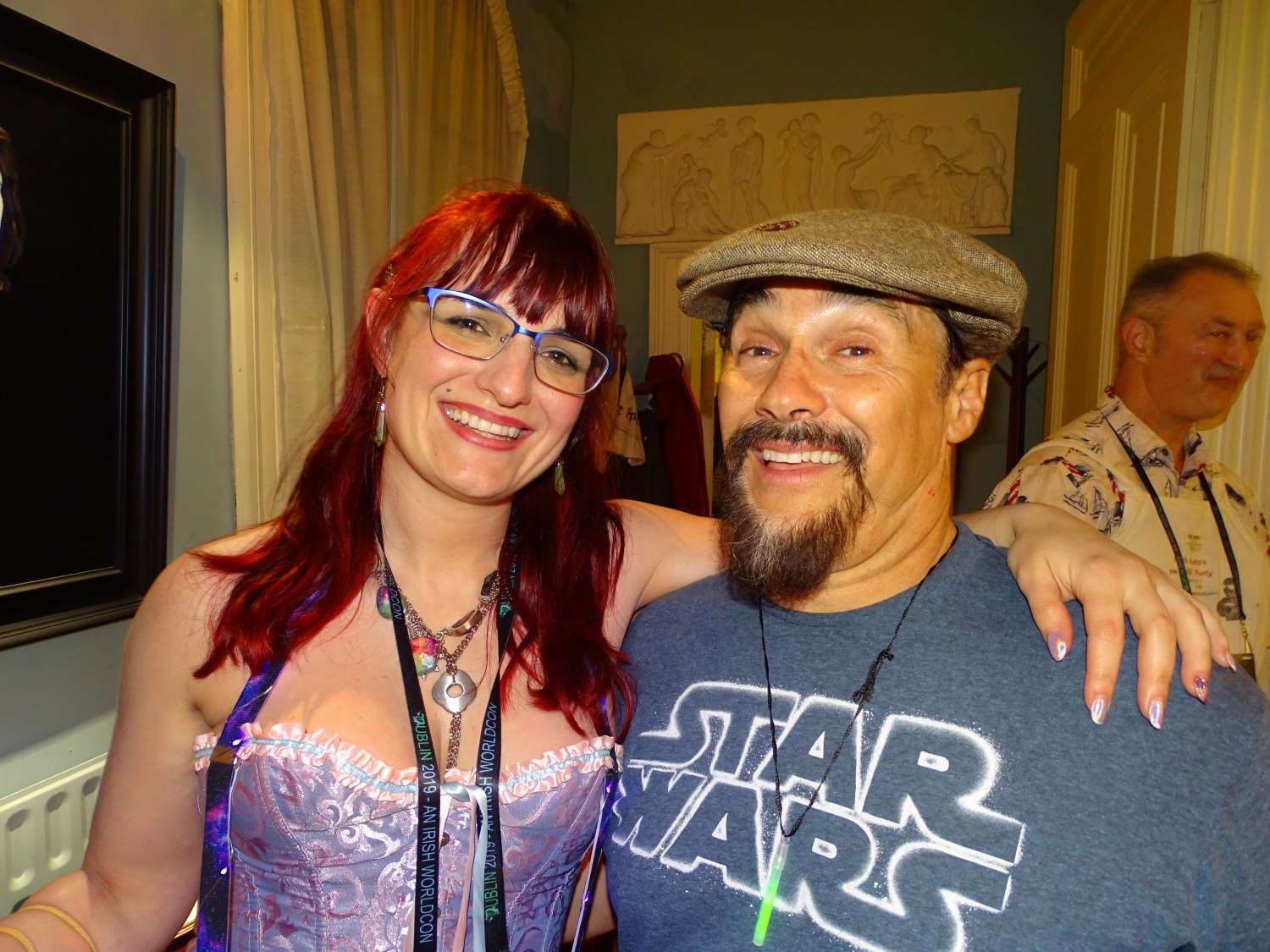 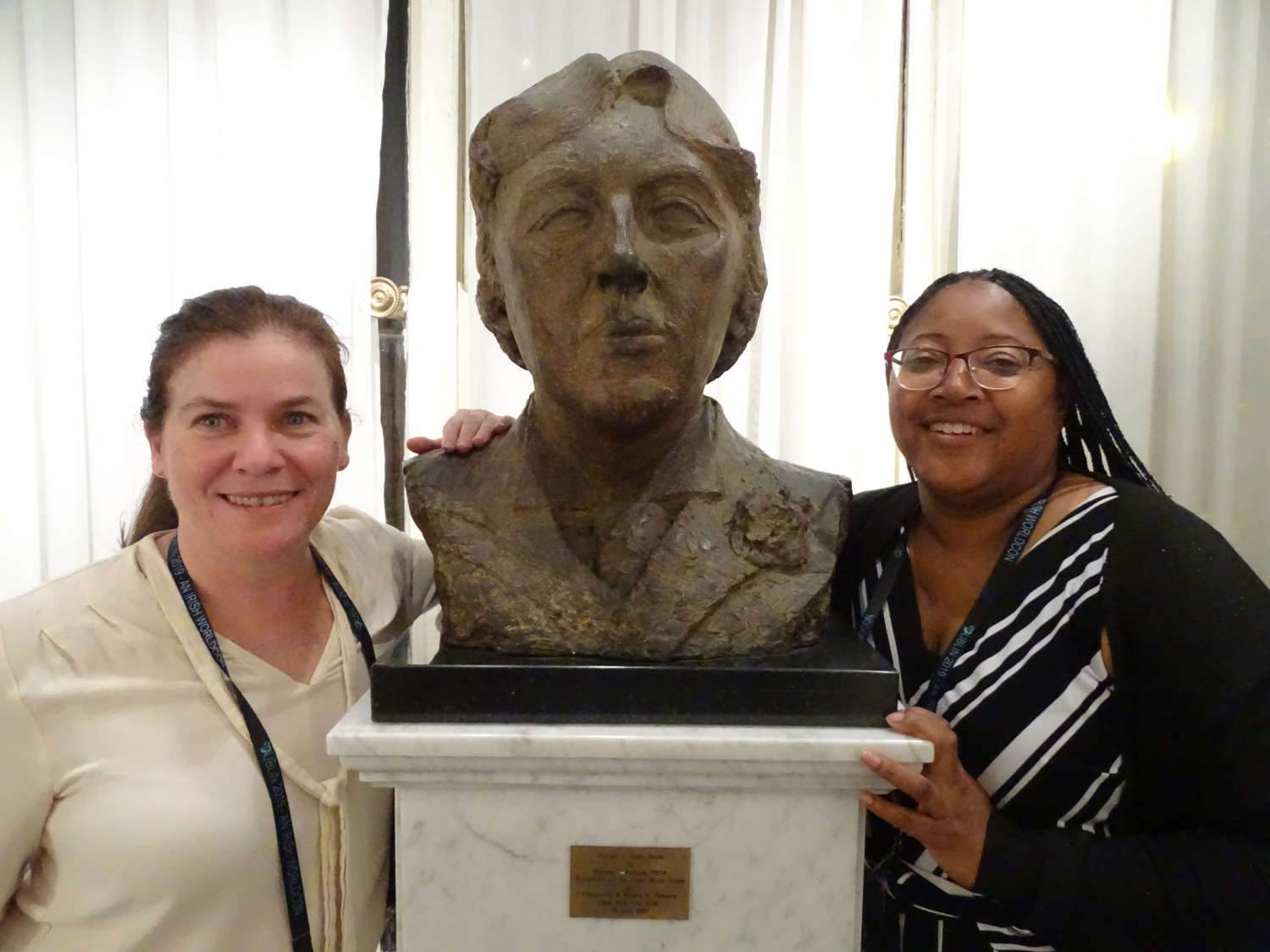 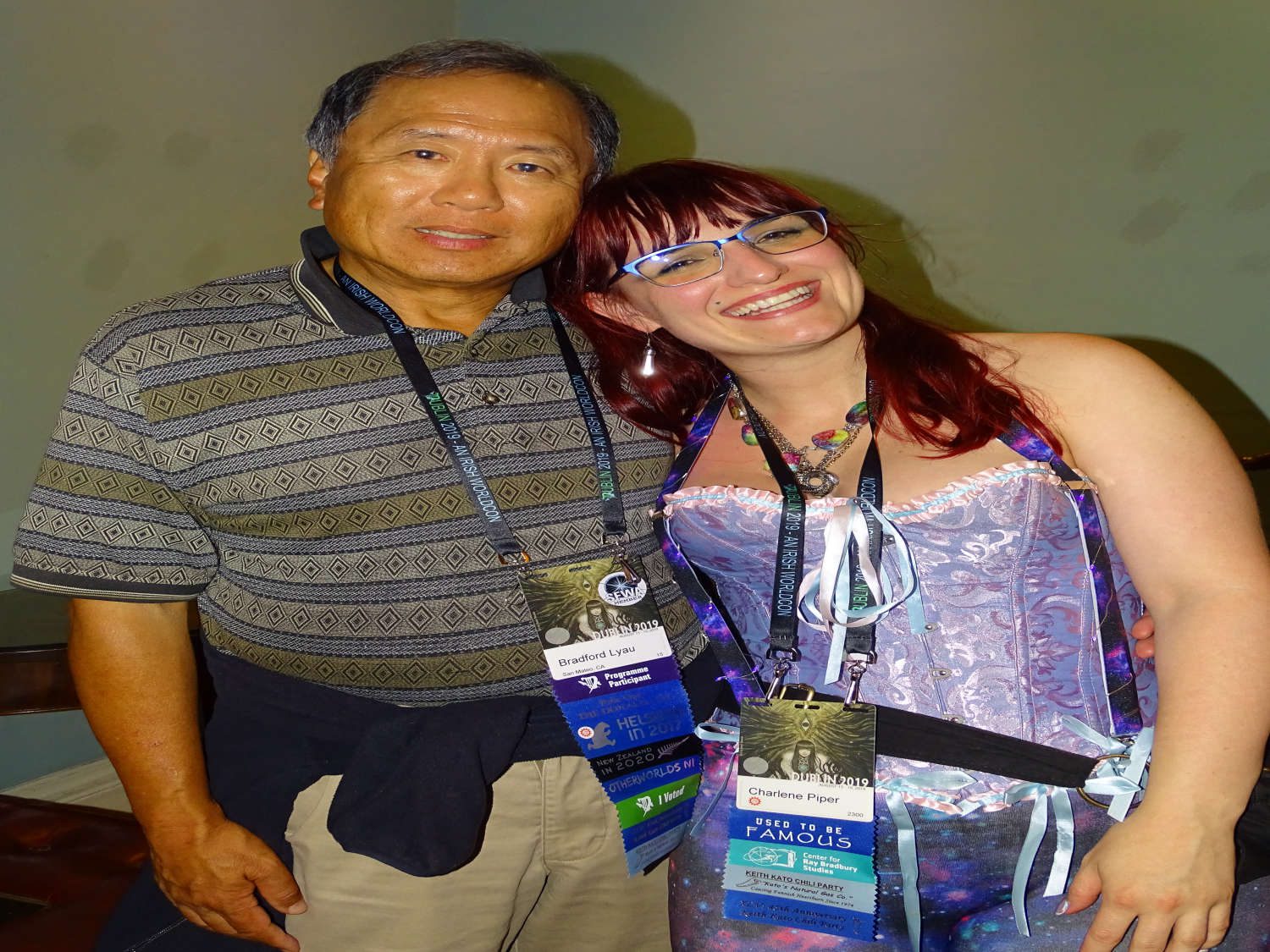 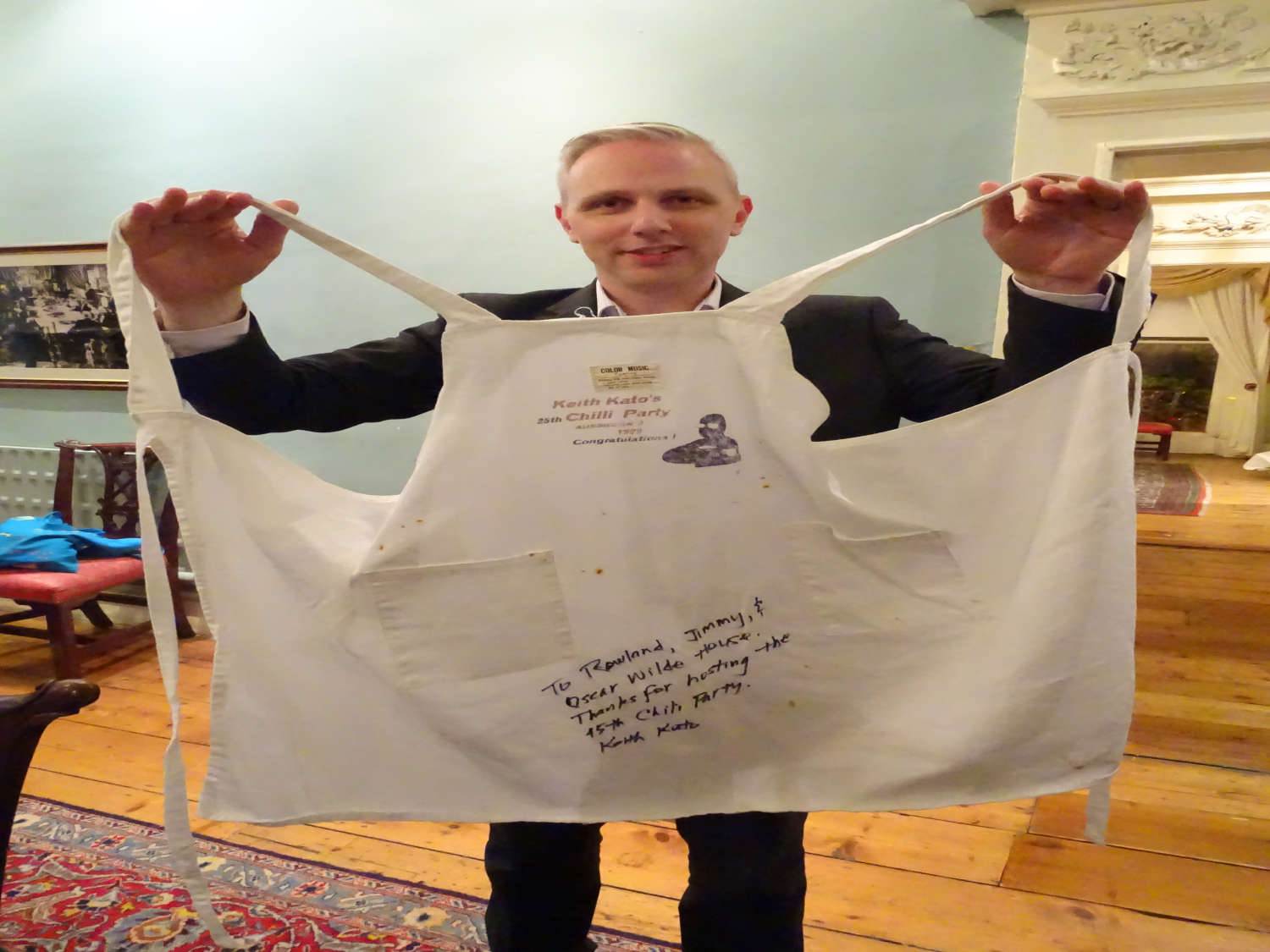 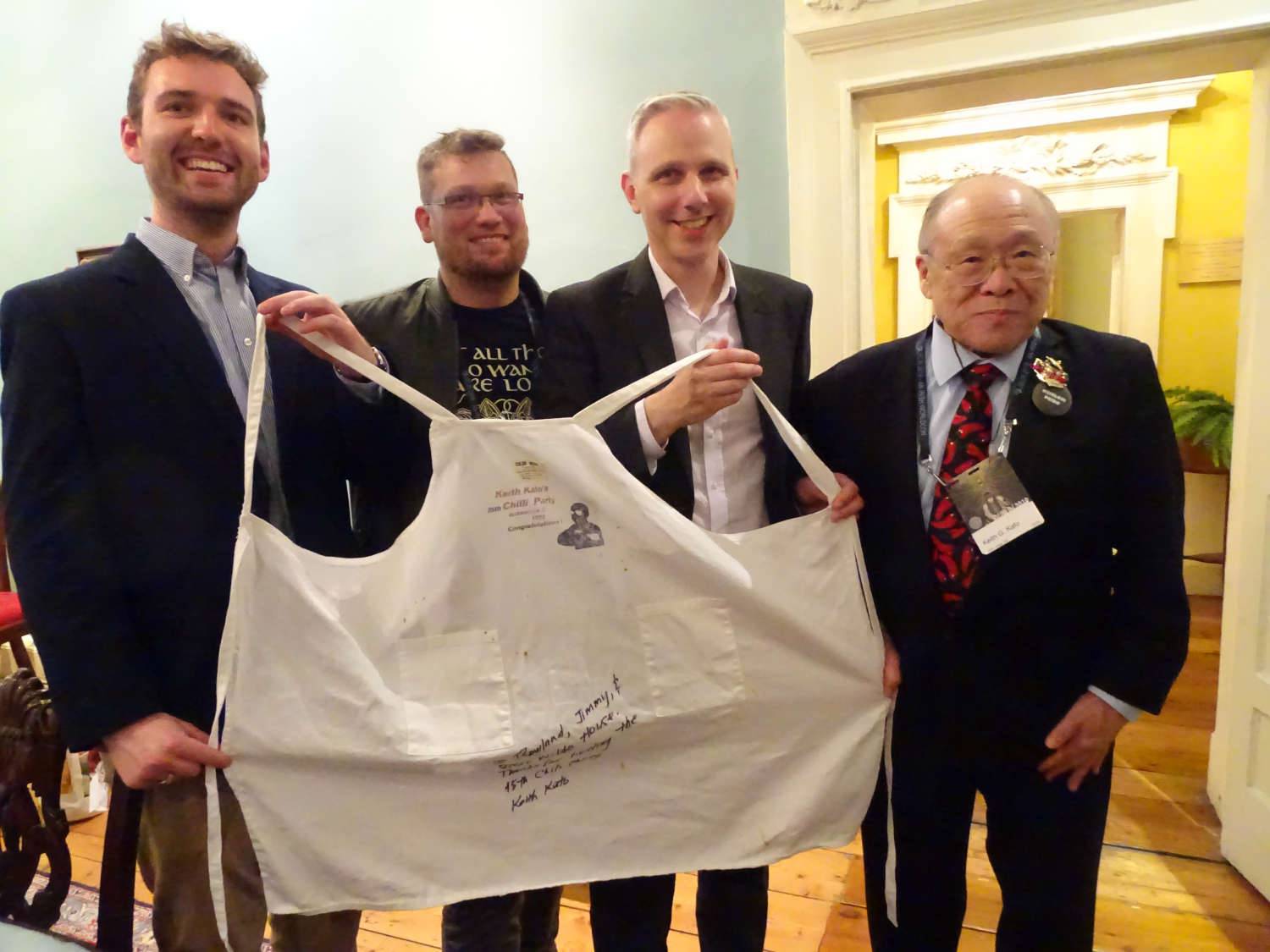 Future THS Convention Activities.  The 2021 Worldcon was awarded to the only bidding committee, Washington, DC.  The 2022 Worldcon site will be selected next year in Wellington, New Zealand, but at the moment only Chicago has a formal bid.  THS’s major convention activities appear to be: