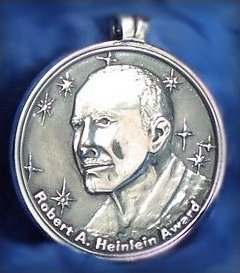 The Heinlein Society announced today that the panel of judges for the Robert A. Heinlein Award for outstanding published work in hard science fiction or technical writings inspiring the human exploration of space has chosen Sir Arthur C. Clarke as the 2004 recipient. The Award will be presented at the Society’s annual dinner, held immediately following the Retro Hugos presentation on Friday night at this year’s Worldcon, Noreascon 4, Sep 2-6, in Boston, MA. Mr. Clarke, who in recent years has rarely left Sri Lanka, where he makes his home, is expected to attend if possible via real-time video.

This is the second year that The Heinlein Society has presented the award, with last year’s inaugural recipients being Virginia Heinlein and s-f author Michael Flynn. Some months later, Flynn replaced the late Charles Sheffield on the panel of judges. The other judges are Greg Bear, Joe Haldeman, Yoji Kondo, Elizabeth Moon, Larry Niven, Jerry Pournelle, Spider Robinson, Stanley Schmidt, Herb Gilliland, and John Hill. For more information on the Heinlein Award and the society’s annual dinner, contact THS at

Clarke, who along with the late Robert A. Heinlein and Isaac Asimov were known as “The Big Three” during the Golden Age of science fiction, is considered an avatar of the “hard” school of science fiction exemplified in the works of Heinlein. “We could not be more pleased with the selection of Sir Arthur to receive this year’s Robert A. Heinlein Award”, said Society president David M. Silver, “as he has consistently written the kind of visionary and readable speculative fiction that Robert Heinlein introduced to the field in 1939.” Silver continued, “Showing the CBS coverage of Robert Heinlein and Sir Arthur with Walter Cronkite during the Apollo 11 landings has become a fixture of the Society’s annual dinner, and we are very pleased that Sir Arthur will be joining us by videoconference at this year’s dinner as well.”

Arthur C. Clarke was born in Minehead, Somerset, England on Dec. 16, 1917. He was an early member of the British Interplanetary Society and served in the Royal Air Force during WWII. His October, 1945 article in Wireless World, “Extra-Terrestrial Relays”, is widely credited with introducing the concept of world-wide communication through the use of satellites in geostationary orbits. The International Astronomical Union would later name this “The Clarke Orbit” in his honor.

His first professional sale was “Rescue Party”, appearing in the May 1946 issue of Astounding Science Fiction, the same magazine that had launched Heinlein’s career seven years before. A prolific and award-winning career would follow, including such classics of the field as Childhood’s End (1953), “The Nine Billion Names of God” (1953), Rendezvous with Rama (1973), and The Fountains of Paradise (1979). His 1950 short story, “The Sentinel”, would serve as the basis for the 1968 movie, 2001: A Space Odyssey, a widely praised and universally known movie directed by the late Stanley Kubrick that would become part of the popular culture. A novel by the same name, and several sequels, would follow. Sir Arthur’s most recent title, Time’s Eye: Book One of a Time Odyssey, was co-written with Stephen Baxter and released earlier this year by Del Rey.

FOR THE BOARD OF DIRECTORS —

President and Chairman of the Board

“The Lieutenant expects your names to shine!”