The Heinlein Society at LoneStarCon 3 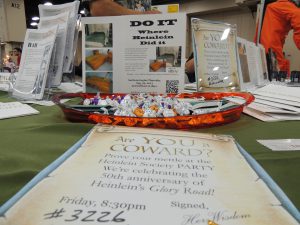 The Heinlein Society participated at LoneStarCon 3, the 71st World Science Fiction Convention, held in San Antonio, TX, August 29th-September 3rd . The Society shared a table in the exhibit area of the con space with the Heinlein Prize Trust, with the two Heinlein legacy organizations teaming up to educate con-goers on Robert and Virginia Heinlein, and the ongoing activities by both organizations. Additionally, oodles of candy was handed out to keep the fens energy levels up for the long weekend of con-going.

Heinlein themed badge ribbons were distributed, including “I Grok Heinlein” (Stranger in a Strange Land), “TANSTAAFL” (The Moon is a Harsh Mistress), and “Are you a COWARD –Glory Road” (Glory Road).  All of the ribbons were met with enthusiasm by the con-goers, but the TANSTAAFL ribbon was a clear favorite and one of the most worn ribbons at the convention. A wealth of flyers about the Society’s activities were also distributed to the fans, and several new memberships and renewals were taken. 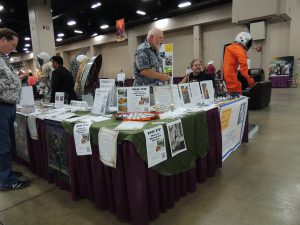 From the Heinlein Prize Trust, present were Rob Lazaro of Virginia Edition Publishing, Trustee Art Dula, Trustee Buckner Hightower, and artist Eric Gignac of the Citizen of the Galaxy graphic novel project. HPT had four space suits (three Russian and one US –the latter formerly belonging to no less than current NASA administrator Chales Bolden) along to display. Of course, a complete set of the Virginia Edition was available for viewing and fondling as well! Some Society members were perhaps observed looking over the shoulders of Gignac and Lazaro at their laptop screen as they discussed the completed artwork for chapter 1 of the Citizen of the Galaxy graphic novel and discussed the story boards for later chapters. 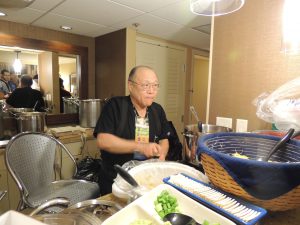 Keith Kato preparing the Are You A Coward chili

The Heinlein Society’s party was held on Friday night, and was combined with the Annual Keith Kato Chili Party this year.  Many fans and Friends of Robert attended. The pro author contingent was also well represented with writers like Greg Benford, David Brin, Connie Willis, Fran Van Cleave, G. David Nordley, Joe & Gay Haldeman, and Robert Silverberg (amongst others!) in attendance for at least some portion of the evening. 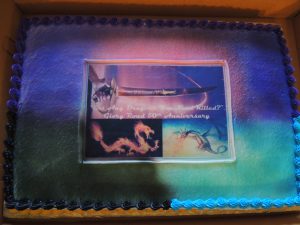 One of two cakes celebrating 50 years of Heinlein's Glory Road

The Kato chili was up to its usual high standards, and two Glory Road themed sheet cakes were met with enthusiasm. Leftovers of the cakes were donated to the convention’s con suite complements of the Society, and helped the other fen keep their sugar rush going. Members Alan Petrillo & Tim Kyger, and Kenn Bates were helpful in the cleanup (and thank you!). Local San Antonio member Betsey Wilcox was instrumental in assisting with preparations for the leadup to the event and deserves special thanks for her efforts, also Diana Gallagher, and Diana’s three grandsons, John, Jonathan, and Kyle helped do a lot of the schlepping to-and-from the hotel, and up-and-down the elevator. Greg Benford’s wife Elisabeth Malartre helped with last minute prep in the room.

The Annual Meeting of The Heinlein Society was held on Sunday afternoon, and was chaired by Vice President/Secretary Kato in the absence of President Sheffield. Board members Connie Willis, Joe Haldeman, and Geo Rule were re-elected to three year terms. 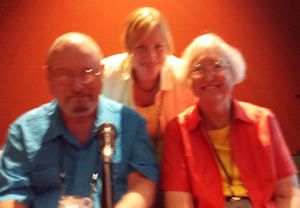 Board Member Deb Houdek Rule “photobombed” her fellow directors Haldeman and Willis for her own personal scrapbook while everyone else snickered. Conversation and feedback with the membership at the meeting centered around discussion of possible new Society membership levels, associated premiums, and general efforts to spread the Society’s message and attract new members. A persistent rumor has circulated that one board member might have quickly displayed to those present the proposed art for a rumored upcoming USPS postage stamp of some famous SF author or other, but when asked about this report, said board member would only respond “No comment!”  Jim Gifford’s wonderfully done pastiche of Robert and Virginia Heinlein reading “This I Believe” was also played for the attendees on the projection screen provided by the convention. 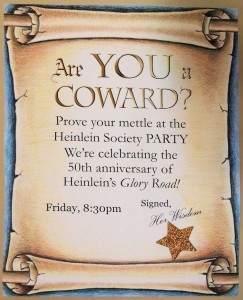 Are You a Coward Glory Road party flyer 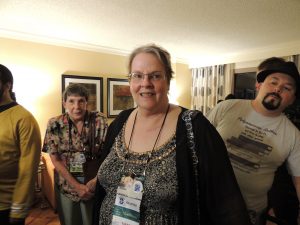 Thanks to Betsey Wilcox and everyone who helped out with the party and at the THS con table! 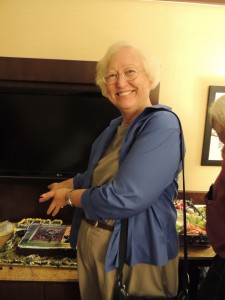 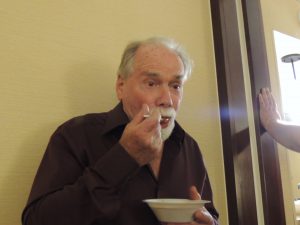 Robert Silverberg bravely passes the "Are You a Coward" chili test, and gamely holds the post for several photos. 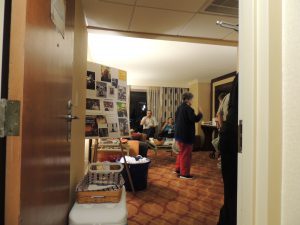 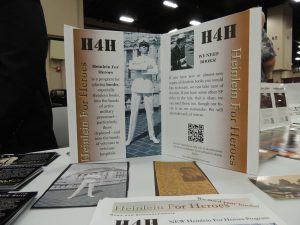