By Caroline Seals and Keith Kato 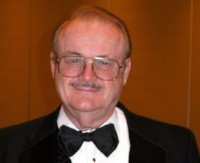 With deep sadness we report that science fiction icon and Director on The Heinlein Society’s Board of Directors, Dr. Jerry Pournelle, passed away Friday, 8 September 2017, during a mid-afternoon nap.  He and Larry Niven had just returned from DragonCon in Atlanta, GA, and in his final blog entry (www.jerrypournelle.com/chaosmanor/ ) he complained of cold and flu symptoms, attributing it to “con crud.”  Jerry had served continuously on THS’s Board from 2005-2017, and had won re-election in our 2017 elections (by the highest vote total of any candidate) for another three year term before he passed.  Despite his multiple professional commitments and obligations, he maintained his presence with the Society because, “I promised Ginny I would.”  With the passing of SF Grandmaster Frederik Pohl in 2013, Jerry was one of Robert Heinlein’s last remaining long-term friends.

Jeremiah Eugene “Jerry” Pournelle was the epitome of the Heinlein Competent Man.  Born in Shreveport, LA on 7 August 1933, Jerry served as an artilleryman with the Army in Korea, and earned three Masters degrees (history, experimental statistics, systems engineering) and two Ph.D.s (psychology, political science). Jerry’s wife Roberta once joked she kept being asked at family gatherings “Is Jerry still in school?”. His multiple careers showed “Specialization is for insects.” He was Director of the Human Performance Lab at Boeing in Seattle that chose the Mercury astronauts; political campaign research director to Los Angeles Mayor Sam Yorty; Deputy Mayor of Los Angeles; professor at Pepperdine University; science fiction writer on his own and in collaboration with Larry Niven, Steven Barnes, Michael Flynn, and others; columnist for Byte Magazine; columnist for Galaxy Science Fiction (“A Step Farther Out”); President of Science Fiction Writers of America, 1973-74; founding president of the Pepperdine Research Institute; and author of many articles on military tactics and war gaming (some of them used as textbooks at the United States Military Academy, Air Force Academy, Air War College, and Naval War College). He is also recognized as the first author to write a novel entirely on a computer.

Jerry’s service to The Heinlein Society was monumental. His final contribution to THS was a monetary donation that ensured all members would receive their new membership cards—only one small example of his generosity of spirit.

Jerry’s family held a Graveside Service on Friday, 15 September 2017 at the Forest Lawn Memorial Park in Hollywood Hills (6300 Forest Lawn Drive, Los Angeles CA 90068, in the “Comforting Light” section, lot 2072), for family and close friends, and a Memorial Mass at noon Saturday, 16 September 2017, at St. Francis De Sales Catholic Church in Sherman Oaks CA. The Pournelle family has requested, in lieu of flowers or memorials, that donations be made to the SFWA Emergency Medical Fund. The Heinlein Society has made a $250 donation in memory of Dr. Jerry Pournelle, as have several Directors and Chairs of our committees as individuals.

In this month’s Newsletter, you will find an article on the Board’s disposition of Jerry’s vacant seat, to which he had recently won re-election. 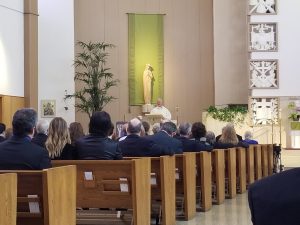 Jerry’s Memorial Mass. The presiding priest gave a funny narrative of Jerry’s life, and each of his five children gave some eulogy, as did one of his four grandchildren. Before he started, the priest asked by show of hands how many in the congregation were SF writers, and I’d guess about one-fourth raised their hands. He asked how many were interested in SF, and somewhere between half and two-thirds raised their hands. From my vantage point (I was in the back—see the photo), I saw authors Karen Anderson, Steve Barnes, Greg Benford, Michael Cassutt, Larry Niven, and Tim Powers, Larry’s wife Marilyn, agent Ashley Grayson, and local L.A. fans John Hertz, Michelle Pincus, and Matthew Tepper.  Stuff I did not know about Jerry: He was an only child, and was often left alone because his parents eked out a hard-scrabble life during the Depression. He enlisted in the Army at age 16, which was both fictitious and a tad illegal. He met Roberta at the University of Washington, not (as the priest humorously put it) at the library or classroom, but at the local student bar. The priest recounted (to much laughter) that Jerry was instantly smitten, but Roberta initially was not. While Jerry was an only child, Roberta was the youngest of 12, so he was almost immediately part of a large extended family. Jerry was quietly generous with both time and money, not only to his SF colleagues, but to his church, Los Angeles Opera, and battered women’s shelters. As I write this, over 1,100 posting have been made as “Well Wishers” on Jerry’s website. After the Mass, Steve Barnes told me the final Niven-Pournelle-Barnes collaboration was very nearly completed.