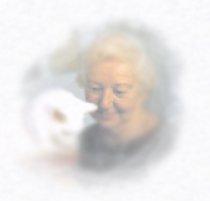 Mrs. Heinlein passed away peacefully in her sleep the morning of January 18, 2003. She was born in New York, and married Robert Heinlein in 1948.

“…Ginny is a chemist, biochemist, aviation test engineer, experimental horticulturist; she earned varsity letters at N.Y.U. in swimming, diving, basketball and field hockey, and became a competitive figure skater after graduation; she speaks seven languages so far…” Damon Knight in the introduction to The Past Through Tomorrow

She also served her country as a Navy WAVE in World War II.