The 72nd World Science Fiction, Loncon 3, was held August 14-18, 2014, at the ExCel Centre Docklands, London, United Kingdom. The Docklands is a fairly recently developed area, so far removed from London proper that the famous London Underground Tube system does not extend there. A modern above-ground, robotically-controlled Dockland Light Rail train system services the area, with an accessible connection to the Tube at the Tower Gateway station. 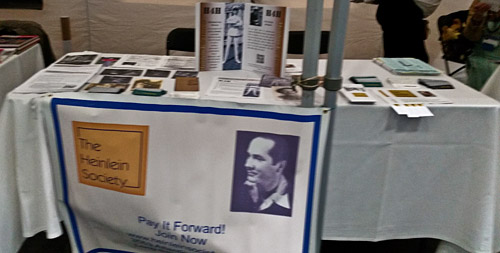 THS’s booth was placed on the perimeter of the Fan Village, a collection of small tents with a large recreational area in the middle to emulate the spirit of a British pub. By day the tents were occupied by various SF groups (information booths for upcoming European SF conventions; the 2015 Worldcon in Spokane WA; bid committees for the 2016 Worldcon from Kansas City MO and Beijing China; bid committees for the 2017 Worldcon from Helsinki Finland, and Japan; even a 2018 bid from New Orleans LA). By night the same tents plus others were occupied by parties of various groups. THS’s table was placed inside a double tent, between the Barcelona in 2016 Eurocon bid, and the Society for Creative Anachronisms. 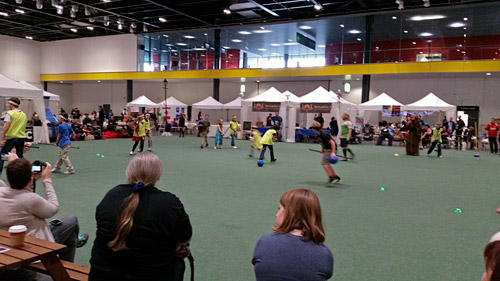 I registered for the Worldcon on Wednesday, August 13, the day before it officially began. Brad Lyau and I then tried to set up THS’s table early, but we were not allowed access into the Fan Village. The ExCel Centre’s security would not let anyone into the area without a special ribbon on your name badge, but the appropriate ribbons were not available. In fact, the ribbons were apparently manufactured in the U.S., were still in overseas transit, and were not distributed until Saturday.

THS’s table was finally set up on Thursday August 14, and I sat there daily from 10:00-18:00 (plus and minus a bit) until breakdown on Monday at 15:00, with the aforementioned help by Brad Lyau, Gerry Nordley, and Alan Petrillo. Some other THS members (past and present) who were not known to be also dropped by to say “hello.” I was pleased to see an old friend Tina Black again, from the Kansas City Science Fiction Society and the Heinlein Centennial; she was doing duty at Site Selection.

The table was populated with flyers on THS and our Blood Drive, Educational, and Heinlein For Heroes programs, plus some quickie tear-offs with our website address. There were also photographs and other Heinlein paraphernalia from the online Archives available for viewing amusement. We also had available several ribbons for interested fans to take. The “I Grok Heinlein” ribbons were completely gone by Saturday morning. The “TANSTAAFL” ribbons seemed quite popular, but our special “RAH: LXXV” ribbons had to be explained several times-2014 was the 75th anniversary of the first published Heinlein story, “Life Line.” Some literature and ribbons were left on the table even after we closed for the day, since the parties in the Fan Village each night went until past midnight. The next mornings’,evidence, some partiers did avail themselves to stuff. 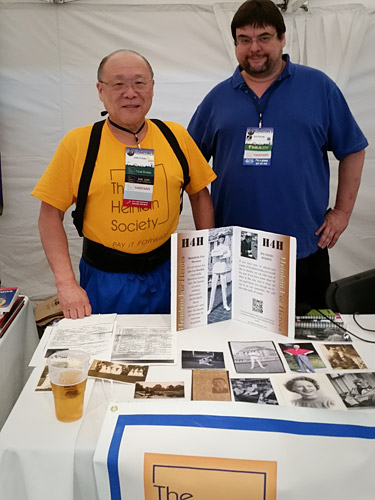 I was very pleasantly surprised by the number of fairly young European fans who dropped by the table to talk about Heinlein. British, of course, but also French, Swedish, Dutch, too. Of special note was Eric Picholle, Anouk Arnal, Ugo Bellgamba, and Estelle Blanquet from France. I had met Eric and Anouk at the 2009 Worldcon in Montreal, when I noticed Anouk wearing a Heinlein Centennial t-shirt. Eric and Ugo were the authors of Solutions non satisfaisantes: Une anatomie de Robert A. Heinlein, and Eric sent me an autographed copy shortly after Montreal. In London, Estelle gave me three PDF files on the use of SF, particularly Have Spacesuit, Will Travel, to teach science concepts for middle and high school age students. Estelle’s manuscripts were in French, which I flunked in high school, but we opened the files and with her coaching I could see what she was doing. We even had some interesting unrelated-to-Heinlein visitors show up, like a Dungeons and Dragons Drow. 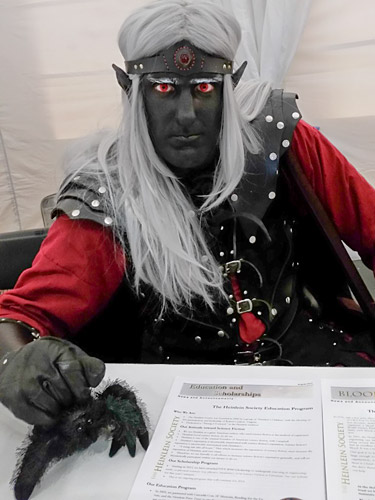 The state of other Heinlein projects outside THS’s realm were also played up: The recently released graphic novel version of Citizen Of The Galaxy, and the imminent release of two movies already completed, Predestination (based on the short story “All You Zombies”) and The Unpleasant Profession Of Jonathan Hoag (from the novella). Gerry Nordley and I spoke with a member of the 2015 Worldcon committee, and he expressed interest in showing either or both movies, either as premiers or as part of the film program next year. There was also almost universal surprise that the Citizen Of The Galaxy graphic novel even existed, yet alone was out. Ditto knowledge of the movies.

There were also some specific comments from two Dutch women that audio books in translation were not available, especially for the RAH juveniles before Dutch schoolchildren become fully proficient in English. A British woman stopped by the table to say her daughter, “Leftenant” (now Captain) Rowan Dagliesh, had told her she had seen books received “from Robert Heinlein.” Upon seeing our Heinlein For Heroes literature, the mother concluded her daughter had seen an “H4H” shipment being received.
Unfortunately, there was no THS party at Loncon. Open parties were mandated by the convention committee to be in the Fan Village, space rented and consumables catered. The finances were simply beyond our means. The Board of Directors is already planning a large presence, party included, at the 2015 Worldcon, Sasquan in Spokane WA, August 19-23, 2015. For further information about early registration and room reservation at Sasquan. The Professional Guest of Honor is David Gerrold, who can tell you an hilarious story about gaining custody of THE Pixel.

The 2016 Wordcon bid was won by Kansas City MO, and will be called MidAmeriCon II. (KC did hold several nights’ of parties featuring catered barbecue.) Old timers will tell you the 1976 Worldcon, also in Kansas City, was called MidAmeriCon, with Robert Heinlein as Guest of Honor. The Kansas City Science Fiction Society (KCSFS, pronounced “kacks-fuss”) was instrumental, beyond measure, in logistical support to pull off the Centennial. Jeff Orth of KCSFS is one of three co-chairs for MidAmeriCon II; Jeff personally did graveyard duty in guarding the exhibits at the Centennial. Jeff re-iterated a conversation he and I had last year in San Antonio-THS may have some input in programming, exhibits, and the like in 2016. For early member registration and hotel information for MidAmeriCon II, August 17-21, 2016.

If you have never experienced a Worldcon, you might want to join THS in either Spokane in 2015, or Kansas City in 2016, or both. Imagine a weird, exhilarating combination of family reunion (if you are related to Gomez and Morticia Addams) and bring your own anything party: Art show, masquerade, dealers, and hundreds of panels involving art, costumes, music, theater, science, space, writing, and good old SF. It always helps to purchase your memberships sooner rather than later, and hotel reservations open nearly a year in advance but fill quite quickly. THS plans to have information tables at Worldcons, so drop by if you can.