Representatives of The Heinlein Society attended Sasquan, the 73rd World Science Fiction Convention, held on Wednesday August 19 through Sunday August 23, 2015 at the Spokane Convention Center and affiliated hotels in Spokane, Washington. Sasquan’s Guests of Honor were artist Brad Foster, SF author David Gerrold (whose first career sale was “The Trouble With Tribbles” episode of Star Trek), SF author Vonda K. McIntire, musician Tom Smith, SF fan Leslie Turek, and astronaut Dr. Kjell Lindgren, who participated in events electronically from the International Space Station! The Spokane Convention Center was the nucleus of daytime activities, but the dispersed layout of supporting hotels (Historic Davenport, Davenport Towers, Davenport Grand, Doubletree, Red Lion Inn) spread over perhaps a mile “as the crow flies,” but as Robert Heinlein noted in Starman Jones, that measure is only of interest to crows. A shuttle system was used during the official convention days, but the wait could be anywhere from 20 to 60 minutes depending on the time of day. The forest fires in the Pacific Northwest (Washington, Oregon, Idaho, Montana) noticeably affected con-goers, leaving the city in dense smoke for a couple of days-on Friday in particular the smoke required car headlights be on during the middle of the day. Some fans simply could not walk in the fouled air, and the odor of smoke permeated hotels and the Convention Center. For the first few days, the appellations of “Smoke-kane” and “Smokey-con” were applied, until the death of three firefighters was reported; the joking stopped when the flags were lowered to half-mast. As per the final daily con newszine, the total reported con membership was 11,635 with total on-site attendance at 5,181 (including total at-the-door 970 memberships). 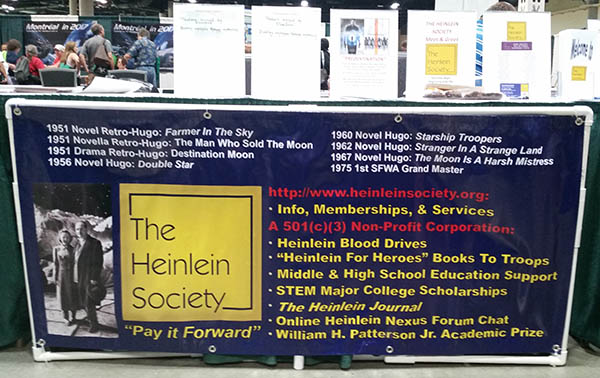 Sharon, Mike, and Keith met Wednesday morning in the Convention Center Exhibit Hall to set up the fan table, then Mike spent the better part of the day supervising the scheduled Heinlein Blood Drive. We expected perhaps 25 donors that day, but actually collected 48 units; that total might have been greater, but the bloodmobile simply lacked the space to handle more donors. Wednesday’s results were so startlingly good, a second day of Blood Drive was arranged for Friday, which yielded 30 more units, for a grand total of 78 units. Mike visited his mother in the area just before Worldcon, where he prepared freshly baked brownies for blood donors-please — no “Alice B. Toklas” jokes, despite what herbs are legal in Washingon! Unfortunately, local rules did not allow us to give the brownies out, so they were used at THS’s table as “fan bait” along with a daily replenished bowl of small wrapped candies. 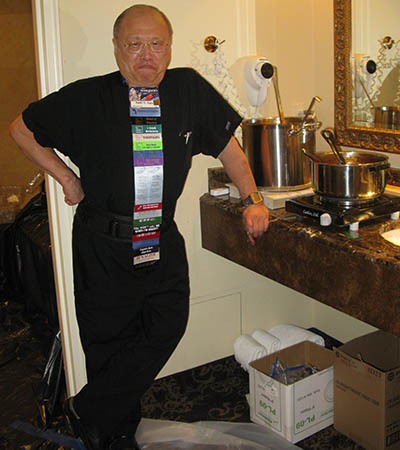 The Heinlein Society’s party was advertised for Friday night in the Historic Davenport. SFWA Grandmasters Robert Silverberg and (THS Director) Joe Haldeman, and SF author David G. Nordley attended. The party was planned around Keith Kato’s various chili recipes, but to hide that fact (cooking was theoretically not allowed in the Davenport) we only said “The Heinlein Society ‘Meet and Greet'” (not “party” for some reason related to the Davenport management’s aversion to “parties” inside the designated party hotel). Four types of chili were offered: Beef Mild, Bison Mild (the most popular), Beef Hot (Robert Silverberg admitted to Keith that for the second time in 41 years, his palate was burned out), and portabella mushroom-based Vegetarian. The usual condiments were available (saltine crackers, oyster crackers, grated cheese, chopped onions, chopped scallions, mashed avocado, black olives), as were a large veggie tray with dips, a large tray of red and green grapes, cinnamon rolls, cookies, bottled water, and sodas. Mike was the functional Door Dragon for the party, greeting entrants with a badge sticker saying “The Heinlein Society Water Brother“; Sharon answered questions about what THS was and did. Keith sat in the back near the chili and drinks, since he had spent all day in his room cooking, and his back was sore. Mike estimated 300 fans attended; doors opened at 8:00 PM, and the final die-hards were chased out at 1:00 AM. Clean-up took about an hour; extra food was donated (and picked up by) Convention Operations, and the hardware was taken back to Keith’s room. Check-out of the party suite was made at 2:30 AM, only 10½ hours after check-in. THS’s party was a tremendous success, not only by the number of attendees, but the compliments we received in subsequent days. 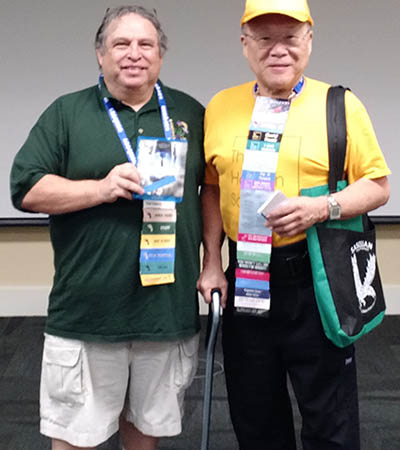 Saturday noon, the movie “Predestination” (based on the Heinlein short story “All You Zombies”) was shown at Sasquan’s Tri-Cities International Film Festival. Keith spent a few minutes introducing the film, noting stuff to look for without revealing spoilers. The room to show “Predestination” held 120 seats, and it was completely full. People who arrived late either left when they could not find a seat (about 10) or stood at the back of the room (another 10). Immediately afterward, about 50 people (some who were not at the showing) participated in a Q&A with Mike Sheffield, Sharon Sheffield, Steve Barnes, Joy Ward, and Keith Kato. The session allowed for vigorous commentary, discussion, and back-and-forth about the movie, especially the faithfulness to the original Heinlein story. Keith showed the two sets of posters 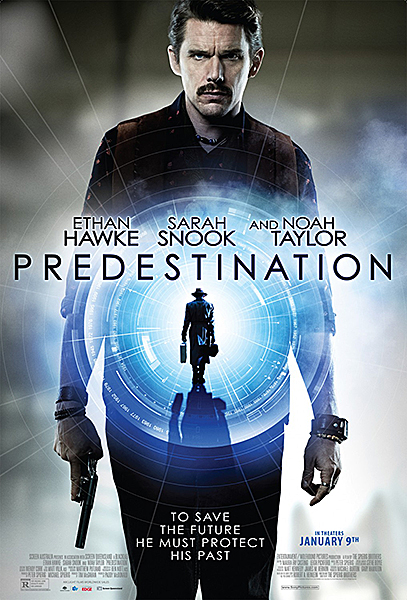 that had been autographed by the Spierig Brothers, and announced they were for bid. The memento booklet containing the movie’s production notes, interview of the Spierig Brothers by Joy Ward, the Los Angeles Times and Hollywood Variety reviews, a review by Keith for The Heinlein Society Newsletter, and photographs from a Los Angeles preview screening was made available for interested parties, and 52 names/email addresses were collected throughout the con for later distribution of the memento booklet. Three different cons asked about showing it at their con, and in the Business Meeting, the Hugo candidacy for “Predestination” was extended to the 2016 Hugo Award ballot. We eventually sold five of the six “Predestination” posters.

We spoke briefly with the MidAmeriCon II committee about next year’s Worldcon, but they were so burnt out (weren’t we all) we plan follow-up discussions in email. There will be quite a bit of Heinlein-related programming and exhibits, with the latter including (we were told) newly digitized video from the 1976 MidAmeriCon (where Heinlein was Guest of Honor for the third and final time), some display items from the 2007 Heinlein Centennial, Heinlein artifacts and realia (typewriters, jewelry, art work), and, of course, the Heinlein exhibit for the Hall of Famous Missourians. The Heinlein Society is also making preliminary inquiries to see of some type of quasi-tour/quasi-“relaxacon” to Jefferson City is feasible after MidAmeriCon II. For further information about the 2016 Worldcon, see www.midamericon2.org . Note attending membership rates will rise after September, 2015.