During the first part, of the 5th decade, of the 20th century, a strange condition overcame the children of the North American United States. Strange domed shaped objects were wrapped around their heads and a strange language developed, with such phrases as …”Blast off you Space rat!… You’re full of space gas!!… Cool your jets!!!… and…watch out for that Martian sand crawler!!!!!” Was this a strange illness that gripped the children or a prelude to an invasion? In a way it was both and neither. A new necessity had entered millions of American homes– TELEVISION. This new sensation ushered in hero’s from space who were the protectors of the universe, knights in shining Dura-steel with smoking atomic blasters, and would be replacing the old standby of the early television… the Western. 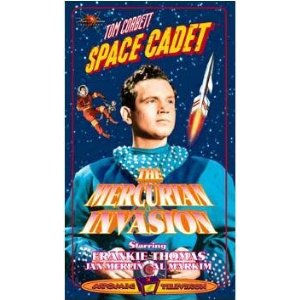 Among the many space hero’s of the early 1950’s Tom Corbett, Space Cadet was one of the earliest. Tom was a young man of the 24th century entering the exciting world of Space Academy to experience the thrill of the final frontier! This popular TV hero was inspired by Robert Heinlein’s excellent juvenile science fiction novel SPACE CADET, published in early 1948. SPACE CADET was the second of a series of 12 juvenile novels published by Scribner’s, beginning in 1947 with ROCKETSHIP GALILEO and ending in 1958 with HAVE SPACE SUIT WILL TRAVEL.

The Library Journal declared …” {SPACE CADET} .. A definite contribution to books on rocketry and outer space. Bound to stand the hard usage.” An excellent prediction since the statement was made in September 1948 and the book has been reprinted many times in hardback, trade, library editions and paperback. In fact all of Robert Heinlein’s Scribner Science Fiction Juveniles have been and still are in print, published by such companies as Dell, Ace and Ballantine. The first U.S. paperback publication of SPACE CADET was issued by Ace in 1971 followed by Ballantine’ Del Rey series in 1978.

The roots of Tom Corbett in SPACE CADET was confirmed by the Heinlein’s in 1977 and by other written sources since that time. When a comparison of the Tom Corbett series published by Grosset & Dunlap (now out of print) and Mr. Heinlein’s SPACE CADET, the similarities become apparent.

A reoccurring theme in Mr. Heinlein’s juveniles deal with young people coming of age and the problems they face in growing up. In SPACE CADET, Tom Corbett’s counter part is Matt Dodson, Roger Manning is partially taken from Girard Burke and Astro, the Venus Colonial, in Tom Corbett is represented by Oscar, a colonial from Venus in SPACE CADET. 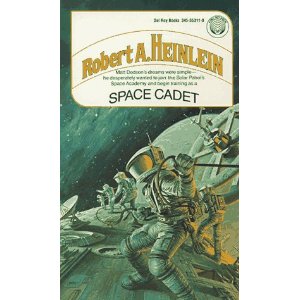 "Space Cadet" by Robert A. Heinlein can be found at Amazon.com: Space Cadet

SPACE CADET follows Matt Dodson and his friends from the beginning of their training at the Space Academy into an adventure on Venus where some of the Academy’s training and the traditions of the patrol are applied. Of course the story is rich in background and details as only Robert Heinlein can provide. If you are familiar with Mr. Heinlein’s stories written within his Future History concept, you may notice some of the information about the Patrol as it is causally dropped throughout SC. For example, a reference to Lt Dahlquist’s sacrifice “..in the tradition of the Patrol..as seen in the Academy’s exhibit hall”, is a direct reference to a future History story published one year after SPACE CADET in the December 1949 American Legion Magazine. The short story was entitled “Rebellion on the Moon”, later renamed “The Long Watch” and collected in several anthologies.

Mr. Heinlein was one of the first to use a Future History series as a backdrop for other stories as yet unwritten at the time. The series provided many stories independent of one another but based on a common technological and sociological outline of history. All of the Future History stories from the late 1930’s to 1967 were published in THE PAST THROUGH TOMORROW. Included in the collection is a chart outlining the major events and stories within the series. The juveniles are not included per se, but examples of some of the future history background appear in the juvenile works as well as some of the juvenile characters cropping up in later non-juvenile stories.

Characters in Tom Corbett were transplanted from SPACE CADET with certain changes. Tom, who is from New Chicago, is modeled after Matt Dodson. Matt is another mid-westerner from Des Moines, Iowa, easy going, hard working and eager to learn. Astro is a combination of Oscar Jensen, a younger Venus colonist and a Texan, Bill Jarman. Roger Manning is something else in SPACE CADET. Roger’s caustic attitude is taken from Girard Burke, affectionately known as “stinky”. Burke, a son of a rich spaceship builder, later resigns from the Academy calling the cadets a bunch of do-gooders, only to get into trouble on Venus where the cadets have to save his hide. Burke was too good to lose and was incorporated into Roger with some redeemable refinements, and a bit of the girl chaser taken from Bill Jarman. The Commander of the Space Academy in Tom Corbett is the same as the Commodore in SPACE CADET… commander Arkwright, except in SPACE CADET Arkwright is Blind. The military ranking in SPACE CADET, as noted from a fellow fan Hank Heyman, were based on Navy ranks. Arkwright outranks Capt Strong. That’s why he was a commodore, which is a wartime rank below Rear Admiral but above Navy Captain. The rank of Commander is below Captain. It is only normal to have Navy ranks in SPACE CADET since Mr. Heinlein is a graduate of the Naval Academy. In the Tom Corbett series Commander is a loose term and in a sense means commander over all of the academy and ranks.

The basic concept of the academy and the Solar Guard of Tom Corbett is the same as the Guard and the Patrol of SPACE CADET. Both were charged with the protection of the total Solar Alliance in Tom Corbett. This situation leads to problems with Matt’s parents and is part of his “coming of age”. The Academy in SPACE CADET is located in Colorado at Santa Barbara Field, Near the crater that WAS Denver. The Academy in Tom Corbett is located somewhere in the mid part of the North American Commonwealth, possibly the Colorado area.

Many of the same training problems mentioned in the Tom Corbett series are presented first in SPACE CADET. The bumps used in testing recruits ability to withstand high acceleration is taken directly from SPACE CADET. A car is sent down a steep ravine and back up in a series of hills causing the occupants to experience a high number of G forces alternated with weightlessness. In Tom Corbett the bumps are mentioned in the first issue of the Tom Corbett Comic (Dell 4-Color #378). The light test mentioned in SPACE CADET is pictured in the daily Tom Corbett strip dated 9/18/51. The cadet is strapped into a chair and told to keep a ball of light centered on a wall in front of him. Sounds easy until the chair starts to convulse and the room is filled with smoke and loud explosions.

The first spaceship to leave earth and return with a crew crashed and killed all on board in both SPACE CADET and Tom Corbett. In SPACE CADET it was the KILROY WAS HERE landing in 1955 and in Tom Corbett is was either the TX-1 Pioneer in the daily newspaper strip or the Solar Queen in STAND BY FOR MARS from the Grosset &n Dunlap TC series. Both Tom Corbett stories have the ships crash landing on the 7th of March 2025. The Solar Queen plays an important part in the Tom Corbett series and explains a problem that arises within the unit.

A major difference with the Tom Corbett series is noted in the Grosset and Dunlap books where the Commander of Space Academy is Commander Walters. Arkwright is the head of the Academy in all other references in Tom Corbett.

Some of the reoccurring themes such as the Moon of Tara found in Tom Corbett may have been influenced by other stories written by Mr. Heinlein. In Mr. Heinlein’s story MISFIT, published in November 1939, we see the same problem of converting a body in space into a rocket. Once converted the asteroid would be brought into a different orbit. This was done in the Tom Corbett radio series (DANGER IN DEEP SPACE) and in the Grosset and Dunlap series (also titled DANGER IN DEEP SPACE).

Thanks to Mr. Heinlein’s contribution to the Tom Corbett universe for which there would be no adventures aboard the Polaris and one of the great 1950’s heroes would not have been seen.