Greetings from Barcelona:
Dear sirs. My name is Juan Miguel de la Torre and I’m writing you as vice-president of the Otium Club, a non-profit cultural association with the mission statement of promoting the appreciation of SF literature as an educational tool and embrace its values as a beacon for mankind’s forward march.
It is as a part of said mission that we came to the idea of a celebration of Robert A. Heinlein’s 111th birthday, this coming July, the 7th.
To that end, we’re programing a series of acts, including conferences by scholars, discussion panels, a book exhibition of the late Great Master of SF and a projection of one of the films based on his work. Our intent is to institute it as El Día H or H Day. Heinlein’s Day.
Hopefully, It’ll become a yearly tradition, helping to keep Heinlein’s work alive into the century.
As an icing on the cake, we’d be honoured to project a short message by your illustrious society as the guardians of Heinlein’s legacy. Just a few sentences on video would do us proud and would certainly be cherished by Spanish fans. 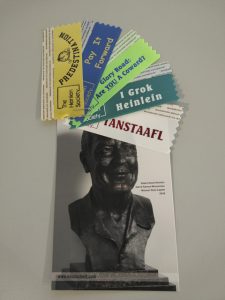 So it’s to that end that I come to you with this small request, to ask you to grace our little festivity with your salute to us, Heinlein’s children this part of the world.
Of course. I’m available for any inquiry you may have as to our organization and its activities.
TANSTAAFL!
Juan Miguel de la Torre Quesada
Otium Club Vice-President

The Society, of course, was pleased to participate! We sent over lots of swag – packets of our “I Grok Heinlein,” “TANSTAAFL,” “Glory Road,” and “Pay It Forward” name badge ribbons, the booklet on the movie “Predestination” (which they played at Heinlein’s Day) and “Predestination” ribbons, and the photo cards from the Hall of Famous Missourians bust . Keith Kato recorded a 1 minute greeting to accompany a 1 page overview about The Heinlein Society. 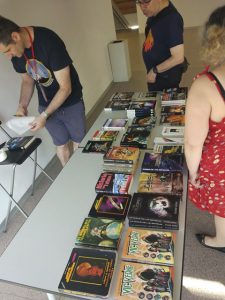 After El Día H, Juan Miguel sent us the following report, plus photos:

It was a great day. The message was joyfully received with applause and the conference was very well received. We also were able to gather a much larger and diverse collection of books than initially expected, including an exemplar of the first edition of Stranger in a Strange Land, which was sequestered by the dictatorship in the 60’s.

Also, we advanced the exclusive of a new translation of Stranger… for an upcoming edition by Gigamesh Publishing.
And, of course, we had a birthday cake. 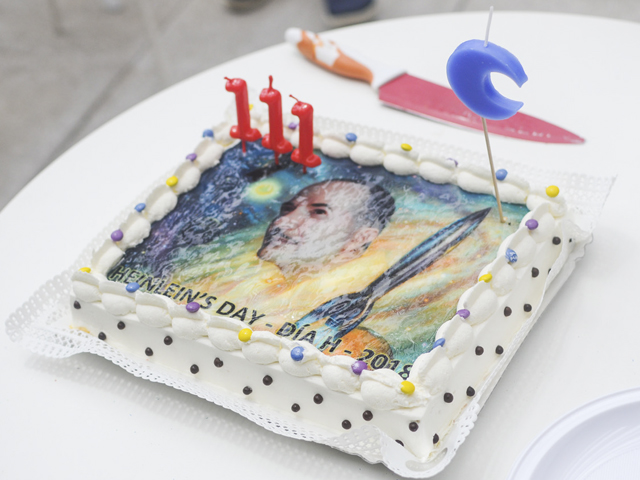 I’m glad to tell you it was a success and all the attendants were enthusiastic about it. We also got very great remarks from the local council people and they offered to collaborate with us on further activities down the road.
I also have good news. We had a last minute guest, Alejo Cuervo, a mainstay of the local SF community and publisher. He is the CEO of Gigamesh Ediciones. And in the Q&A at the end of the conference he announced Gigamesh is working on a brand new translation of Stranger in a Strange Land that will probably see the light come Fall. So we have an exclusive too for your Society’s Newsletter. 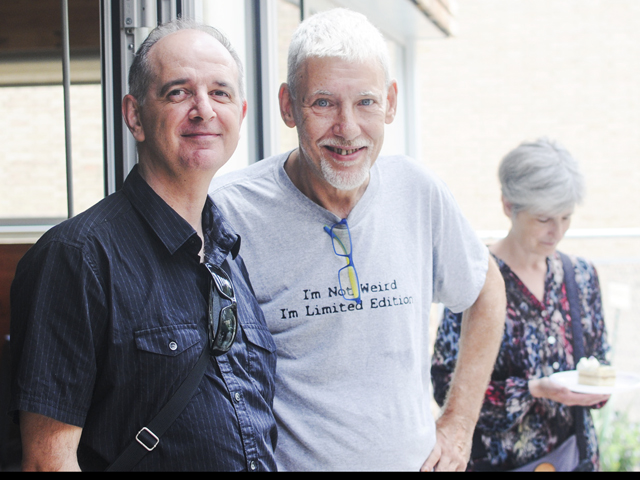 Salvador Bayarri you already know from his videos, and the man in white beard is Alejo Cuervo.
Once again, it’s been a pleasure.
TANSTAAFL!

We hope to see the Otium Club at Worldcon in Dublin next year, which will be barely five weeks after their (hopefully) second annual Heinlein Day. For those of us planning to attend Dublin, it should be quite a treat to meet sympatico Heinleiners.