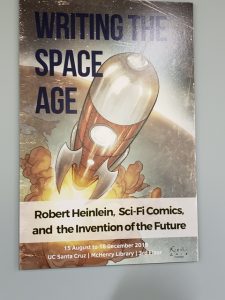 On Wednesday 15 August (the day before Worldcon officially opened), about 30 Heinleiners made their way to the campus of the University of California, Santa Cruz (UCSC), to see an Exhibit of items from the physical Heinlein Archives. After several months of planning, the group gathered at 10:30 AM in the lobby of the San Jose Hilton Hotel. Kevin Ellingwood drove part of the contingent in a rented 15-seat passenger van, while Keith Kato and John Seltzer also volunteered to drive passengers. As things worked out, Worldcon Guest of Honor Spider Robinson’s schedule allowed him to come with us, and John Seltzer (at his first WorldCon! What luck!) drove him—-basically three hours of round trip conversation, with the Guest of Honor and well-known Heinlein advocate! Mike Sheffield volunteered for special assignment—airport pickup duty. The balance of the group drove joined the caravan en route.

The original itinerary would have taken the caravan on a pilgrimage past the old Heinlein home on Bonny Doon Road in Santa Cruz for photos and genuflection. One of our party provided “boots on the ground” intel that there was Nothing To See from Boony Doon Road itself, and no shoulder on either side of the road to park without blocking traffic. This part of the trip was abandoned; there really was Nothing To See. With the early departure, surprisingly little traffic, and no Bonny Doon side trip, most vehicles arrived earlier than planned and were able to enjoy a leisurely lunch at the McHenry Library’s cafeteria. 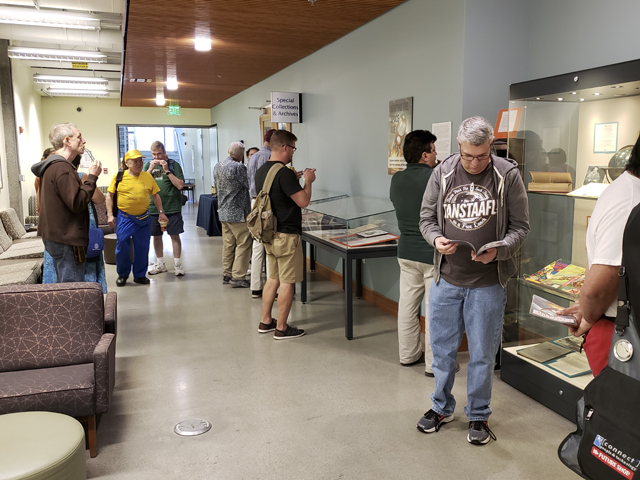 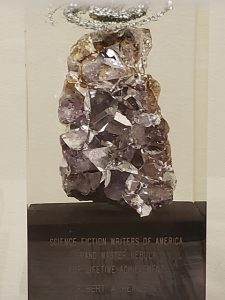 Bellies full, the intrepid participants trekked next to the Special Collections Library and Gallery. The Heinlein Society’s group was the first official visitors on Opening Day of the Exhibit, which will run until 16 December 2018. Jessica Pigza, the Outreach and Exhibits Librarian of Special Collections and Archives, had arranged to meet us after lunch, with coffee, tea, cookies (some very thoughtfully gluten free), and brownies. She also brought a special commissioned free comic book, Rocketship Lunatic, a riff on the Heinlein juvenile Rocketship Galileo with Heinlein as a character. 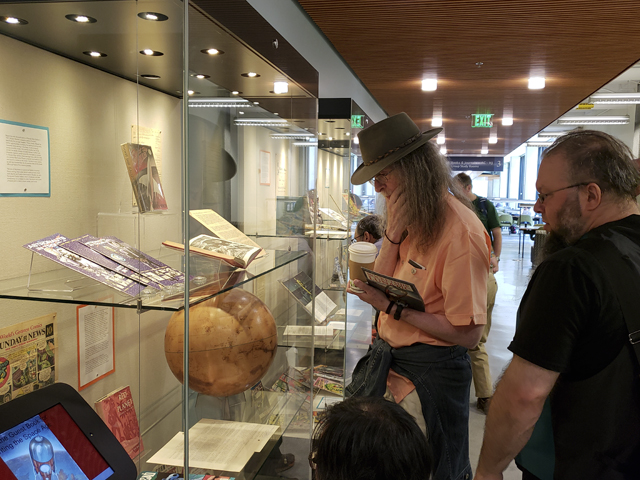 Jessica and other staff members engaged in vigorous conversation about the use of the term “sci fi” in the Exhibit. As the two very prominent SF authors in the group, Gregory Benford and Spider Robinson (both past or present Worldcon Guests of Honor), could testify, the term has had detrimental effects on authors’ sales, many SF authors do not like the term. Swayed by their eloquent testimony, Jessica said they would change the wording in the Exhibit! 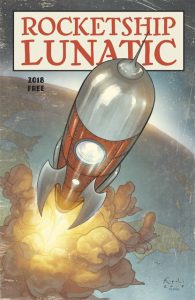 The Library staff gave us two boxes of Rocketship Lunatic to hand out at Worldcon, and as per follow-up letters from both John Tilden and Keith Kato, they agreed to send THS all their remainder copies when the Exhibit run was over.

“Mission & Vision”
In the evening of 15 August, after our return from UCSC, the Society held a members-only “Mission & Vision” meeting beginning 6:30 PM. Ever flexible in the face of changing plans, we brought salads, pizzas, and drinks to Keith’s room in the Fairmont and had the meeting there. A good time was had by all, and we were able to Pay It Forward by sharing the extra food with some hungry (and grateful!) fans.

Worldcon Opens! We set up the Blood Registration and THS Fan Tables in time for a noon start. Our tables were about 25 feet apart, and Carlin Black staffed the Blood Drive Registration table, solo, for almost the entire Con. 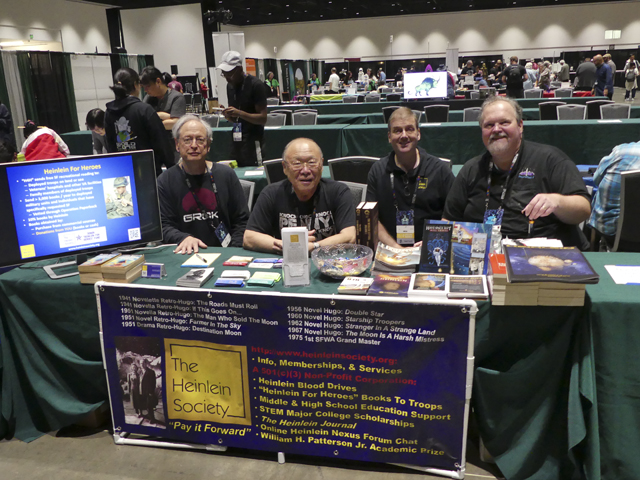 At our Fan Table, we tried an experiment: A continuously looping PowerPoint briefing on THS and our activities, viewed on a fairly large 32 inch 1080p monitor. We’d hoped it would decrease table clutter, and it was at least partly successful.

Heinlein Blood Drive
The Blood Drive registration table set up on Thursday to allow donation appointments Friday, Saturday, and Sunday. Unique bureaucratic requirements necessitated using the Bloodmobile. Carlin Black and Mike Sheffield estimated that having to use the bloodmobile, instead of the space we’d planned on, unfortunately resulted in half of the donations we could have collected. Still, 98 units isn’t too shabby! 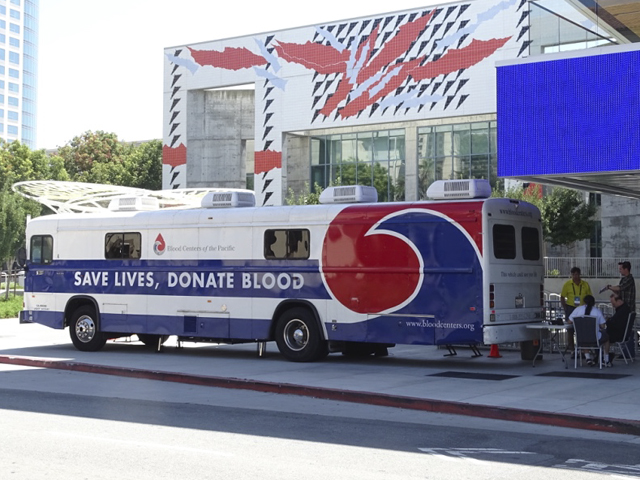 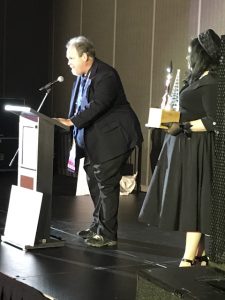 Retro-Hugos. The Retro[spective] Hugo Awards ceremony was the evening of 16 August, for work published in 1942 that would have been Hugo-eligible at the 1943 Worldcon (which neither existed nor gave out Hugos). Robert Heinlein had four stories nominated in three categories, and in one category (Novella) he had himself to compete with! Heinlein nevertheless won for Best Novella (“Waldo”) and Best Novel (Beyond This Horizon), bringing his total Hugo count to 11. The Retro-Hugo vote tally is attached. Vice President-Secretary Geo Rule was asked by Art Dula of the Heinlein Prize Trust to accept on Heinlein’s behalf. For the Novella, Geo had the line of the night: “I answer for him,” and asked Spider Robinson to come up and “help” as the second acceptor, to much cheering. After the Ceremony, we all took photos with the award hardware, and Spider beamed as if they were his own. The THS gang was invited up to Spider’s suite for a celebration, where there were some really weird potato chip flavors passed around. Spider was lucky enough to keep both trophies in his room for two whole nights! 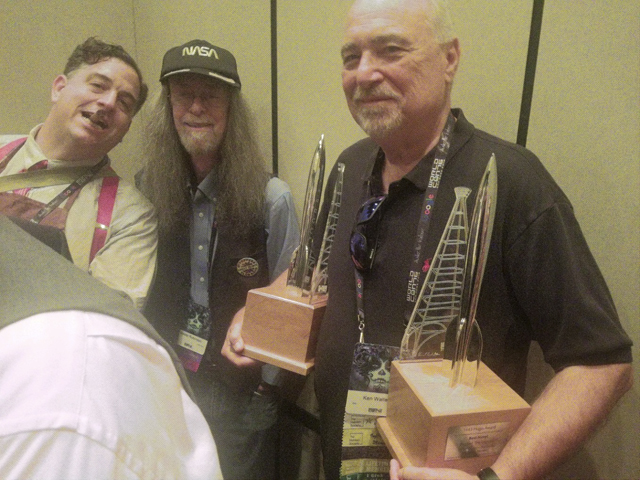 THS Party
The Heinlein Society’s party was held on Friday 17 August, 18:00—Midnight, primarily a semi-closed reception for our members and invited guests, but anyone who managed to find their way in got to stay (except for one inconsiderate person on a skateboard scooter. One must have standards!). We opened on time, even with some set-up left to do. 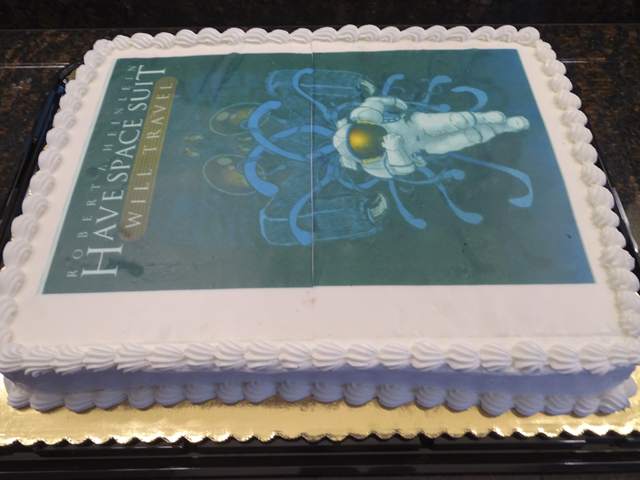 The earliest arrivals were Drs. David and Cheryl Brin, followed shortly by the twin brothers Drs. Greg and Jim Benford. Game of Thrones Superstar George R.R. Martin also made an early appearance. It took about 30 minutes for people to realize he was there and slowly accrete around him, to which he graciously acquiesced. 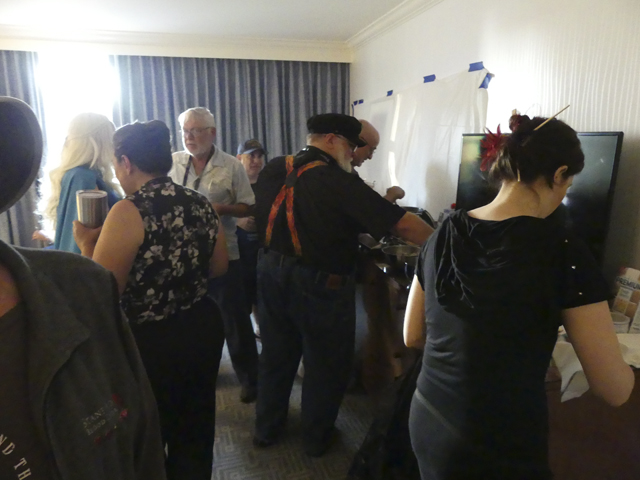 Authors G. David Nordley, SFWA Grandmaster/THS Director Joe Haldeman, and Steve Barnes also showed up. Joe and Gay Haldeman brought with them a surprise guest, Astronaut Dr. Kjell Lindgren, who gave us a certificate from the International Space Station stating the cover of Starship Troopers had flown on the ISS. Much to our surprise, SFWA Grandmaster Robert Silverberg and his entourage appeared at about 9:30 PM, much earlier than usual.
The sushi platters were quickly vacuumed up. We tried to close as planned at midnight, but chasing out hangers-on (who wouldn’t take the hint) and moving everything back to my room for later cleaning took until about 1:30 AM.

Harlan Ellison Memorial
A Harlan Ellison memorial was scheduled for Saturday, 20 August, 2:00 PM. I first met Harlan in 1973, and he actually came to my Ph.D. party at my parents’ home on Christmas 1982. Unfortunately, the dubious planning skills of the ConCom (lamented about obliquely elsewhere) struck once more and the numerous attendees spilled out of the room reserved and in to the hallway.

THS Panel
A Sunday 20 August, 10:00 AM panel was scheduled with the title “Science Fiction Authors Live On Through Organizations: Heinlein, Clarke, and Bradbury.” This panel was originally pitched for the Academic Track, with the working title “New Kids On The Block,” but the Programming people appear to have been momentarily supplanted by humorless trolls. Unfortunately, conflicts and poor planning were again our enemy! The other Heinlein-focused panel was scheduled for the same time-slot, and attendance at our panel was not what we’d hoped. Those who DID attend found a lot of interesting material—three contiguous talks by Dr. Erik Viire (The Arthur C. Clarke Center For Human Imagination), Jason Aukerman (Ph.D. candidate at Indiana University, and Coordinator for Development and Programming for The Center For Ray Bradbury Studies), and me for THS. In the Q&A, David Brin commented on how different the three organizations were, in charter, mission, structure, and probably funding. This is the first meeting, and possible prelude to a cooperative venture involving “BACH”—Bradbury, Asimov, Clarke, and Heinlein organization.

Best Academic Track Paper Prize
THS’s evaluators, Dr. Herb Gilliland and Dr. Marie Guthrie, attended the live deliveries of the Academic Track programming – quite a feat, as the deliveries were sprinkled throughout the Con rather than condensed into one day. As of this Newsletter’s publication, Marie and Herb are going through a post-Worldcon evaluation, and hope to make their decision within one month.

Future THS Activities
With the 2019 Worldcon awarded to Dublin, the 2019 NASFiC site was voted on this year. The 2019 Westercon in Layton, Utah chosen to add-on NASFiC AND Minicon duties. The 2020 Worldcon had only one bidder, so to no one’s surprise, Wellington, New Zealand was awarded the 2020 Worldcon. This means at the 2019 Worldcon in Dublin, the 2020 NASFiC site will be chosen. For the first time in Worldcon history, in two successive years the Worldcon will be off the North American continent, and two successive NASFiCs will be chosen. At the moment, the only bid for the 2021 Worldcon is Washington, DC. The 2021 Worldcon site will be selected next year in Dublin. The major convention activities appear to be: