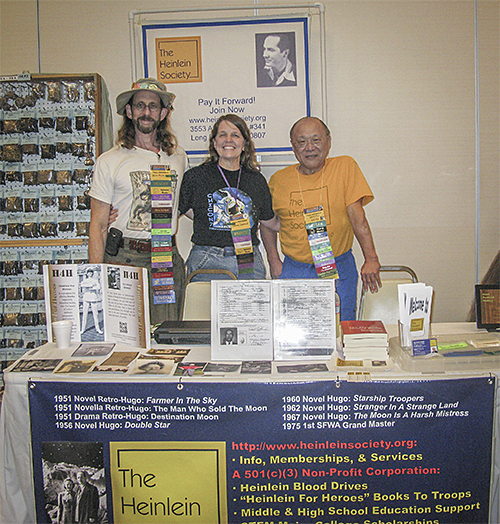 THS’s immediate past president, Mike Sheffield, his wife, the Reverend Sharon Sheffield, current president, Keith Kato, and member Bradford Lyau rotated at the Society’s information table. Information was given out in oral and written form on Heinlein (many of the younger fans did not know who he was), the Society, and the Society’s various activities.

Convention attendees were able to partake in the SF fan practice of ribbonology on their name badges. Society ribbons “I Grok Heinlein,” “TANSTAAFL,” “Glory Road: Are YOU A Coward?,” and “Pay It Forward” were available generally, and specialty ribbons designating “Board of Directors,” “Influential Member,” and “Donor: Heinlein’s ‘Hall of Famous Missourians’ Statue” were also available to those who qualified. To those interested, we also handed out copies of Andrew Thornton and William H. Patterson, Jr.’s The Martian Named Smith, a critical analysis of Stranger In A Strange Land.

On Friday, July 3, Mike supervised the Heinlein Blood Drive at Westercon from 10:00 AM to 3:15 PM in a bloodmobile parked directly outside the convention facility. Mike reports 24 total donors, despite having no mention of the Blood Drive in either the Program Book or the Programming Grid. The donors received Thank You cards, “Blood Donor” badge ribbons, and blood donor pins using the original design by Robert and Ginny Heinlein from 1976. In addition, donors could take their receipts to Comic-Con the following week, and even if not a Comic-Con registered member, could get a “swag bag” of goodies.

Also on Friday, Keith was the moderator of the panel “Heinlein-Who Dat?” with panelists Dafydd ab Hugh, Eytan Kollin, Brad Lyau, and Gary Westfall. The panel began with the question whether Robert Heinlein’s influence in the SF field was inexorably declining; the lack of a Hugo Award nomination for the second volume of William H. Patterson, Jr.’s Heinlein biography was cited. Keith made the point that outside the SF fan field, Heinlein was still quite a presence in sales (about $300K per year in royalties), movies (the recent “Predestination” and the upcoming “The Unpleasant Profession Of Jonathan Hoag”), astronomical artifacts, and the influence of “Heinlein’s Children” in robotic surgery and nanotechnology. Brad argued that the Hugo situation may have been an artifact of the nomination process and the so-called “slate voting bloc,” relating (based on his own Hugo nomination experience) that one does not see the actual nomination votes of the candidates until after the Hugos are awarded. Wearing his non-Heinlein hat, Keith also conducted his “Shotokan Karate Workshop” with his senior black belt student Kenn S. Bates. Their Workshop, which has been at Westercons, Loscons, and Worldcons in various forms since 1984, leads raw beginners through the basic motion of one block, one punch, and one kick, which are later combined in faux sparring and faux kata (forms) exercises. As usual, there were several ringers in the group, who had training (up to black belt level themselves) who simply attended to work out.

The 2016 Westercon will be held July 1-4, 2016, in Portland OR and the 2017 Westercon site was awarded to Tempe AZ, July 1-4, 2017. The next SF convention with major Society presence will be the 2015 World Science Fiction Convention, Sasquan in Spokane WA August 19-23, 2015. If you plan to attend Sasquan, be on the lookout for The Heinlein Society’s information table, where you can get further information about our Thursday night party, the play schedule for “Predestination” at Sasquan’s film festival on Saturday, “Predestination” posters autographed by the co-writers/co-directors Michael and Peter Spierig, and much more!