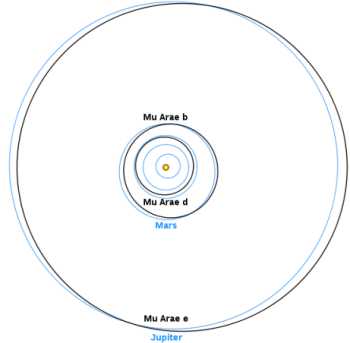 The orbits of the outer three planets in the Mu Arae system compared to those in our solar system. Central star is not to scale. At the scale of this picture, the innermost planet Mu Arae c, would be located at the edge of the disc representing the central star.

The NameExoWorlds contest, organized by the IAU and Zooniverse, recently accepted naming proposals from registered clubs and non-profit organizations. THS selected the Mu Arae system to name.
Mu Arae, often referred to by its designation in the Henry Draper catalogue HD 160691, is a main sequence G-type star around 50 light-years away from Earth in the constellation of Ara. The star has a planetary system with four known planets, three of them with masses comparable to that of Jupiter. The system’s innermost planet was the first “hot Neptune or super-Earth” to be discovered.

We proposed naming the Mu Arae star RobertHeinlein in honor of the writer Robert A. Heinlein (1907-1988). We chose this system, which is about 50 light years away, to mirror the length of Heinlein’s writing career. Robert A. Heinlein was a U. S. Naval Academy graduate and was retired from the U.S. Navy for health reasons. He did civilian work for the U.S. Government in WWII. He was very involved in the promotion of space exploration and was on the air with Walter Cronkite during the Apollo 11 moon landing. He was given the NASA Distinguished Public Service Medal posthumously in 1988. Heinlein was named the first Science Fiction Writers of America Grand Master in 1975. He was one of the first science fiction writers to break into mainstream magazines such as The Saturday Evening Post in the late 1940s and was one of the best-selling science fiction novelists for many decades. In his fiction, Heinlein coined terms that have become part of the English language, including “grok” and “waldo”, as well as popularizing the term “TANSTAAFL” (an acronym for There Ain’t No Such Thing As A Free Lunch). Mr. Heinlein’s writings have influenced many generations of writers, scientists, astronauts, military leaders, inventors and entrepreneurs. Twenty-seven years after his death his books are all still in print and influencing new generations. Permission has been granted by the Heinlein Prize Trust, executors of Heinlein’s literary estate, to use the names of his characters for the exo-planets.

Podkayne is the lead female character in the book Podkayne of Mars and was chosen for Mu Arae b because this planet has a Mars-like orbit. The story of Podkayne Fries was originally intended as one of Heinlein’s juvenile novels although it out grew that classification as the story developed. In the story, Poddy (as she is known to family & friends) was an adolescent girl born a citizen of Mars with ambitions of becoming captain of a space liner. She journeyed to Venus on her way to Earth, with her brother, Clark (a genius with definite antisocial tendencies) and their uncle, Tom Fries. While on Venus she was kidnapped by her uncle’s political opponents and was seriously injured in a bomb blast following her escape. A ground-breaking story for its time, Podkayne was one of the first teenaged female protagonists. The character’s demise led to the “redemption” of her brother. The story ultimately was a cautionary tale about “latch key” children and what can happen from lack of parenting.

Robert Heinlein was known for his personal love of cats as well as his fictional use of cats. Mu Arae c is named for the cat Pixel made famous in the novel The Cat Who Walks Through Walls. Its close orbit to the star is reminiscent of a cat trying to find a warm lap to sit on. Pixel has an inexplicable tendency to be wherever the narrator in the novel happens to be, like Schrödinger’s cat. In one scene Pixel does, in fact, walk through a wall, and it is explained that Pixel is too young to know that such behavior is impossible. The naming of Pixel is also to honor all the other cats in Heinlein’s life and stories. Several of Heinlein’s characters have been fond of felines and have been quoted as saying, “Never try to outstubborn a cat,” “If you would know a man, observe how he treats a cat,” and “How you behave toward cats here below determines your status in Heaven.”

As the planet with the most Earth-like orbit, Mu Arae d becomes LazarusLong, one of the best known and most frequently written-about characters in Heinlein’s multiverses. Born in 1912 in the third generation of a selective breeding experiment run by the Ira Howard Foundation, Lazarus (birth name: Woodrow Wilson Smith) becomes unusually long-lived, living well over two thousand years with the aid of occasional rejuvenation treatments. A rugged individualist with a distrust of authority, Lazarus drifts from world to world, settling down periodically and leaving when the situation becomes too regimented for his taste-often just before an angry mob arrives to capture him. The Lazarus Long set of books involves time travel, parallel dimensions, individualism, extended family and a concept that Heinlein named World as Myth-the theory that universes are created by the act of imagining them, such that even fictional worlds are real.

With the most Jupiter-like orbit, Mu Arae e becomes NoisyRhysling, aka ‘the Blind Singer of the Spaceways.’ Immortalized in “The Green Hills of Earth” we learn the story of “Noisy” Rhysling, the blind space-going songwriter whose poetic skills rival Rudyard Kipling’s. Heinlein spins a tale about a radiation-blinded spaceship engineer roaming the solar system writing and singing songs. The events of the story concern the composition of the titular song. An aged Rhysling realizes that his death of old age is near, and hitches ride on a spaceship headed to Earth so he can die and be buried where he was born. A malfunction threatens the ship with destruction, and Rhysling enters an irradiated area to perform repairs. Upon completing the repairs, he knows that he will soon die of radiation poisoning, and asks that they record his last song; he dies just moments after speaking the final, titular verse. The Science Fiction Poetry Association (SFPA) award for speculative fiction poetry is called the Rhysling Award. References to Rhysling and “the green hills of Earth” were made by Apollo 15 astronauts. They named a crater near their landing site “Rhysling.” This name has since been adopted officially. When it was time to leave the moon, Capcom Joe Allen told them it was time to “come home again to the homes of men, to the cool green hills of Earth.”

Public voting for the honor of naming the system will open in August 2015 and THS will be sending out messages with the link to register to vote as soon as the site opens. Check your email, Twitter & Facebook accounts as well as the THS website for more information as it becomes available.