Some time ago I asked friend and author G. David Nordley how accurate Heinlein really was when he wrote of planetary orbits and spaceship trajectories. I referred him to a technical paper I’d found on the Internet examining “The Heinlein Maneuver.” This is the maneuver described in Heinlein’s novel The Rolling Stones. I expected Gerald would do a quick piece saying either, “Yes, Heinlein was right,” or  “No, Heinlein was wrong.” Instead it’s evolved into a research project for Gerald that is leading to a much longer paper. I recently told him if he gets a Nobel Prize out of this I want to be mentioned in his acceptance speech! 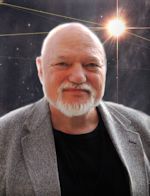 At the beginning of chapter 7 of his novel, The Rolling Stones, Robert Heinlein introduces the gravity well maneuver:

“A ship leaving the Moon or a space station for some distant planet can go faster on less fuel by dropping first toward the Earth and then performing her principle acceleration while as close to the Earth as possible.”

This is a variation on a maneuver introduced by Hermann Oberth in his book Wege zur Raumshiffahrt (Ways to Spaceship Travel), Zerlag, Munich-Berlin 1929. Oberth used a whimsical interstellar example about a ship leaving an asteroid for a distant star, but the principle is the same.

Fig. 1. Oberth’s figure 66. Compare the trajectory to B with that to C.

Below, I have redrawn Oberth’s figure to correspond to the Earth-Moon System, and specifically the trajectory of The Rolling Stone (B’ to B ). What matters here is called “hyperbolic excess velocity,” which is the velocity a spacecraft would have after the maneuver at an infinite distance from the center of the central mass, often abbreviated as v(inf).

For simplicity (I’ll address some of the complexities later in an online article), we shall assume a spacecraft like The Rolling Stone is in lunar orbit.

The average velocity of the moon in its orbit is about 1.02 km/s. To lower its perigee to an altitude of 200 km above the surface (lower would increase air friction), the spacecraft does a ∆v (change in velocity) of 840.627355 m/s. I kept the decimals to remind us that this must be an extremely precise maneuver; as many of us remember from the Apollo days.

When the spacecraft reaches perigee (π, in figure 2.) it is moving at almost exactly 11 km/s. Its computer fires its engines (with manual backup ready) at four g’s for a minute. This results in a ∆v of about 2.352 km/s and a new perigee velocity of 13.352 km/s at π. Our Rolling Stone coasts away from Earth, eventually slowing to a “hyperbolic excess” velocity of 7.4 km/s.* on its way to Mars. Adding the 0.841 km/s it used to leave lunar orbit gives a total ∆v of 3.193 km/s.

If The Rolling Stone had simply added 3.193 km/s to its orbital velocity at Lunar distance (C’ –C in figure 2), it would get a v(inf) of about 4 km/s relative to the Earth.

So the gain from using trajectory B’ – B instead of trajectory C’ – C is about 7.4 – 4.0 = 3.4 km/s. Where does that come from? We can’t put off an equation any longer. Hyperbolic excess velocity, given a velocity of v, at a radius of r, from the center of a mass with a gravitational parameter, µ is :

Where “ve” is the minimum escape velocity at r. The secret of the gravity well maneuver is that, when one adds something to a number that is to be squared, one gets a bigger increase when the number to be squared is bigger to start with.

This happens in any circumstance where one is adding to numbers that are squared, such as the Pythagorean theorem (“the square of the hypotenuse…”).

Orbital velocity is greater the closer one is to the planet. So adding to velocity down there gets you more than adding it higher up. But getting down there costs ∆v and the escape velocity is also higher at lower altitudes, so one has a tradeoff. The maneuver only works if the original orbit is high enough and the ∆v large enough. For the 2352 km/s of our simplified Rolling Stone model, one would get a gain for all circular orbits down to a radius of 27,667 km. There both the “gravity-well” and “single-burn” maneuvers would produce a hyperbolic excess velocity of about 5.37 km/s. Below that, the single-burn maneuver would be better.

Heinlein, possibly following Oberth, who says something similar, explains the gain in terms of the mass of the rocket propellant. Having fallen from the Moon’s distance to just above the cloud tops the propellant has acquired a lot of kinetic energy, so its expenditure gets rid of more energy, which accrues to the spacecraft.

The problems with that explanation include:

We don’t blame Heinlein; he probably got the best advice available at the time, and some form of this “explanation” has been often repeated in more recent technical papers. I’ve probably spent more time researching the question than he took to write the novel! No doubt the subject will still result in all sorts of discussion.

Were I less busy and more mathematically adept, I’d investigate the question in the far more complex spacecraft-Earth barycentric formulation, where one does not assume the Earth is fixed. Its reflex motion would be very, very tiny, but is multiplied by an immense mass.

I could also make an analogy to the Pythagorean theorem, another sum-of-the-squares equation. No one gets upset when at small angles, a small addition to the hypotenuse makes for a large addition to the opposite side. It’s just the way the math works.

* Yes, 7.4 km/s is not a Hohmann transfer to Mars velocity, and with the heavens aligned properly that ∆v could get The Rolling Stone to Mars in about 90 days. But that’s the subject for another article.

Books by G. David Nordley published by Variations on a Theme are available at Amazon.com. The Heinlein Society receives a commission for purchases made through these links. 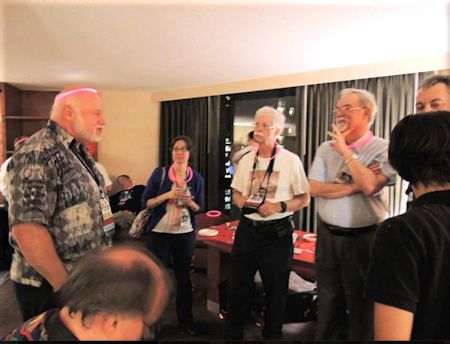 G David Nordley discusses the physics of The Heinlein Maneuver at the Heinlein Society party at WorldCon 2012, Chicon 3