This is copyrighted material and may not be copied or reproduced in any form, including on other websites, without permission of the copyright holder.
©Virginia Heinlein, used with her permission 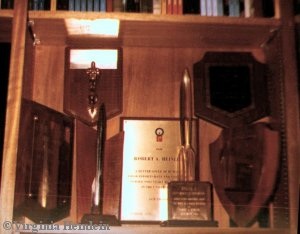 One of the bookshelves which they had dedicated to awards. We are seeing at least two Hugos and several plaques from different conventions. 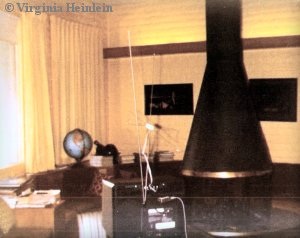 The living room. The house plan was circular, and we are looking at the place where the outer wall meets an interior wall. The Swedish fireplace dominates the room. Seating is on a built-in banquette on the outer wall and window. 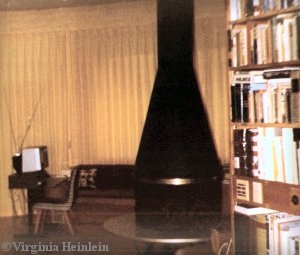 Another view of the living room -- we can see a bit of the bookcase on the entranceway. The drapes are closed in this one. 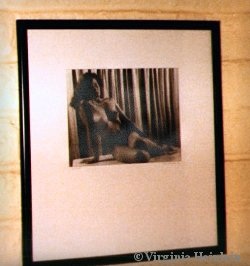 In the 1940's Heinlein belonged to photo clubs in Los Angeles, who hired professional and non-professional models and shared them among the club members. This was his favorite model, Sunrise Lee -- of her he said she "could not fall into an ungraceful pose." This was the only one of his photos that he hung in his home, and it is now in the possession of the Heinlein Society. 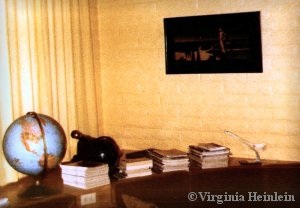 Side angle on the living room. On the wall is the illustration Fred Ludekens did for "Green Hills of Earth" in 1947 (now in the possession of the Heinlein Society -- see below); several stacks of books on a built-in work-table behind the banquette, and their working globe of the earth (at the U.C.S.C. Archive) with the Brass Cannon that gave The Moon Is a Harsh Mistress its original working title (now in the possession of Brad Linaweaver). 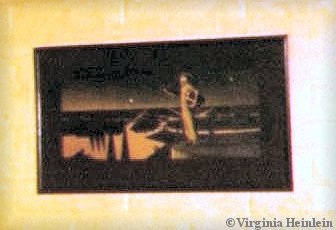 Another angle on the Ludekens 1947 illustration for "Green Hills of Earth." This is the illustration that appeared in the February 8, 1947 Saturday Evening Post, spread across two pages. It was also featured in the Post's informational supplement, Keeping Posted that showcased RAH. 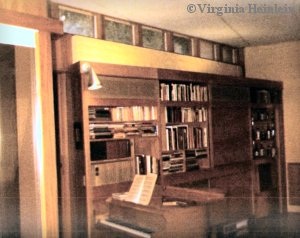 Ginny's piano and one of their built-in bookcases. Note the clerestory windows at the top of the wall -- a feature RAH liked to build in, as it simplified construction of internal walls. 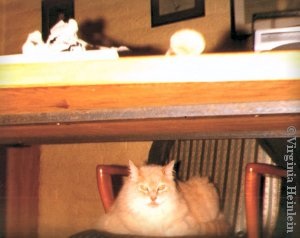 Taffrail Lord Plushbottom, in one of the dining room chairs. 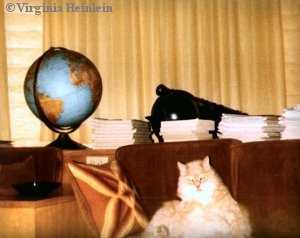 Taffy again, with a view toward the behind-the-banquette table in 47. Ginny needlepointed the cushions behind Taffy while sitting by RAH's bedside as he recovered from his 1978 carotid bypass surgery. 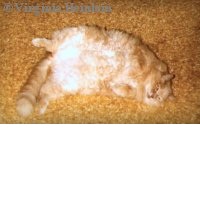 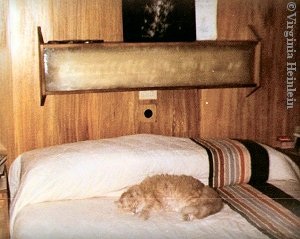 Taffy again, on one of the beds RAH specially designed and built. It is a very high bed, about 30 inches, with storage drawers underneath and special bedside tables with storage for tissue, a trash receptacle, the usual drawers, and a pull-out writing surface. He also specially designed and built the fluorescent light bar above the bed, for reading. That's what the copperish bar is above the bed.