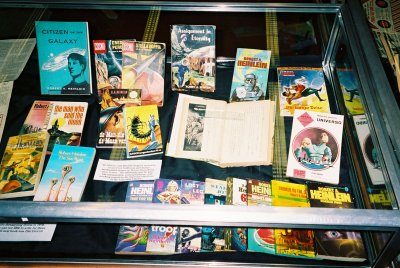 The 1950's fade into the 1960's and Heinlein's foreign editions proliferate. 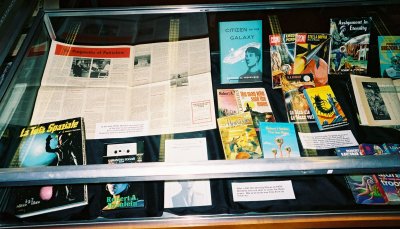 1960's and 70's (with some colorful covers from other periods thrown in for effect). The newspaper is one of several reprints of his "Pragmatics of Politics" speech before the Corps of Midshipmen in 1973 (the program for the James Forrestal Lecture series is a brochure under the newspaper) 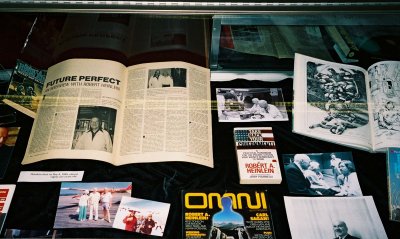 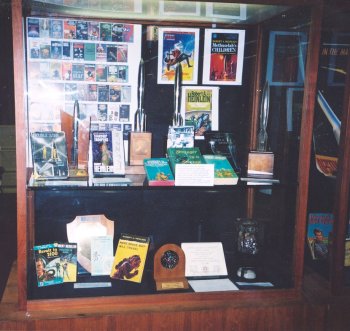 This is one of Heinlein's 'Hugo corners' in the vertical display cases, with the Hugo, first edition and paperback of Stranger taking center stage, flanked by Starship Troopers and The Moon Is a Harsh Mistress. In the back is a poster print of a number of mostly mid-1950's cover art. 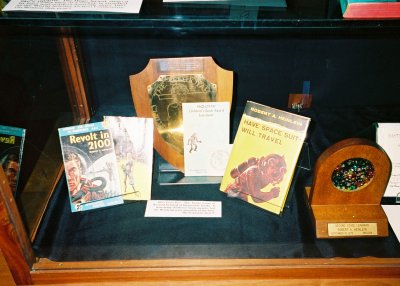 Some miscellaneous awards -- the Heinleins were very proud of the Sequoyah Children's Literature Award (the plaque) for Have Space Suit -- Will Travel. The upstanding multicolored plaque is the Doc Smith award -- it's a Lens, see! -- given him at Moscon X, when he wrote the "Larger Than Life" appreciation of Doc Smith for Smith's daughter, Verna Trestrail. 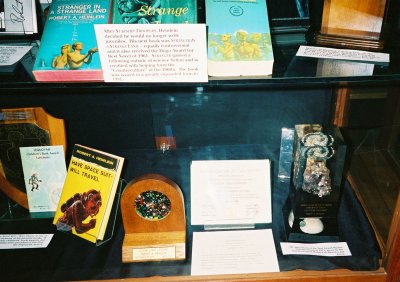 And the Grand Master Nebula completes the "miscellaneous" awards. At the top we can just see the Hugo display for Stranger In a Strange Land on the shelf above. 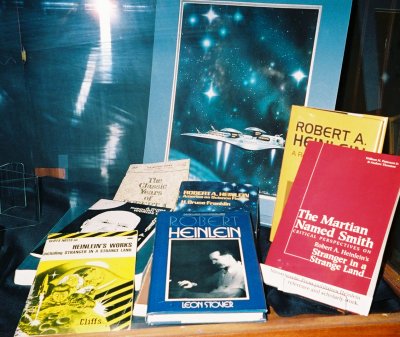 In the vertical cases we were able to make several "clusters" of similar material. This is "books about" scholarship, grouped around Frank Kelly Freas' original illustration for H. Bruce Franklin's 1980 book, Robert A. Heinlein: America as Science Fiction. But the red book is the most important, of course! Did you know Heinlein had a Cliff's Notes? Written by Baird Searles in 1975. Searles was then managing the book review column for Fantasy and Science Fiction. 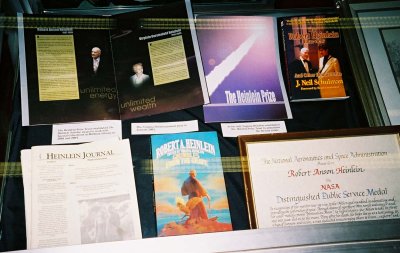 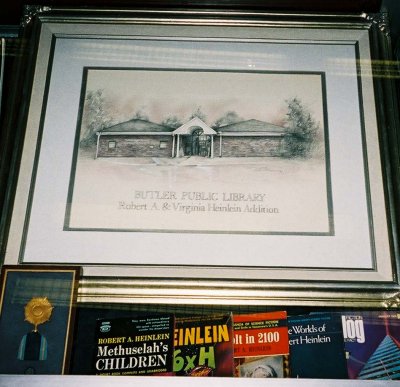 After RAH's death, Virginia Heinlein endowed the Butler Library, where RAH was born, with a cash grant, the deed to the Bonny Doon house, and rights to certain of the books. They built a new wing of the library, the Robert A. and Virginia Heinlein Addition and dedicated it in 1991. 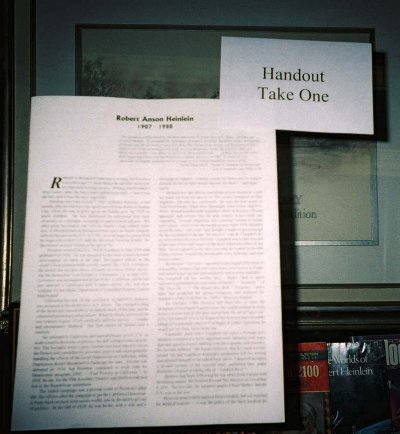 I prepared a four-page short biography and list of Heinlein's works as a handout for the display -- something people could take away and read later.

Go to Part 3 of Heinlein’s Universe: The Robert A. Heinlein Archive Exhibit.