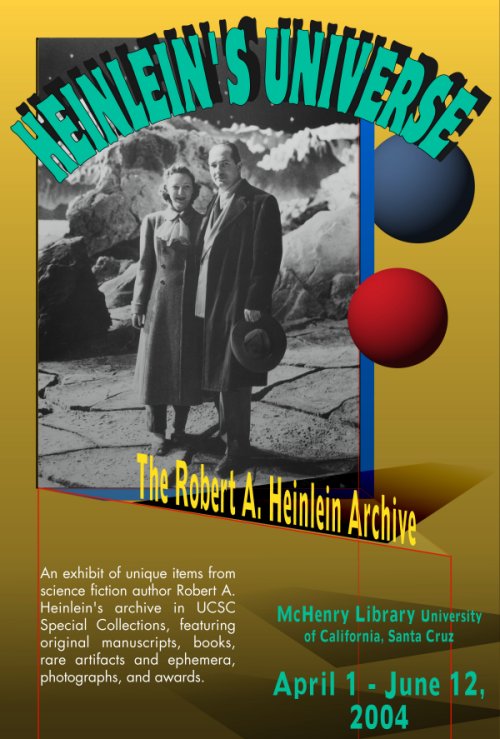 McHenry Library at U.C. Santa Cruz regularly runs displays on its ground floor entranceway, usually of interesting material held in the University Library’s collections. After Easter 2004, the Friends of the Library asked Special Collections to put together an exhibit of materials from the Heinlein Archive.

Mrs. Bunting, the new Head of Special Collections (and also Head of the University Library’s Collections) asked me to help Liz Sandoval and Wendy McMullen put together the display.

They had a special poster made up to introduce the exhibit, using the 1949 portrait of Robert and Ginny Heinlein on the set of DESTINATION MOON. 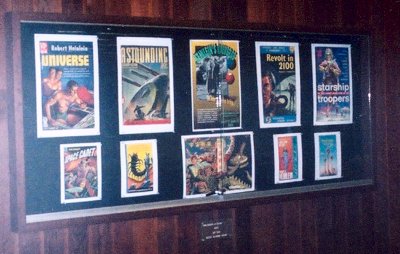 The librarians seemed fascinated by the 1950’s paperback covers and had dozens of blown-up color reproductions done. 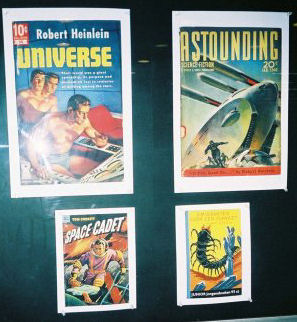 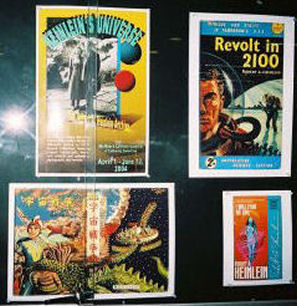 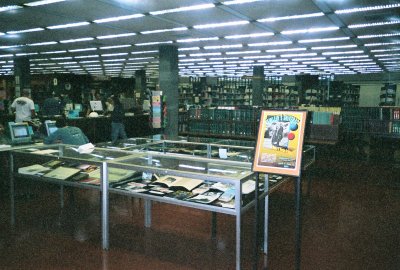 View of the Exhibit from the Library's main floor entryway. There are a couple of vertical cases on the left, outside the frame of this photo. 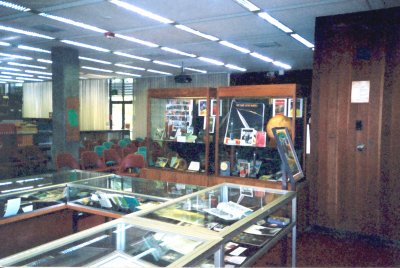 Looking at the display from the inside of the ground floor. The flat cases in the foreground are arranged in a roughly chronological fashion; the vertical cases at the back have topical displays. 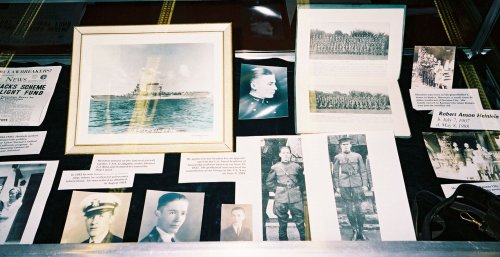 Military Heinlein: About 1924-1930. Because of the way the display was arranged, these photos "read" from left to right. Photos of Heinlein's family show all seven children about the time he graduated from high school. That thing in the bottom right part of the case is the flag belt he wore for ROTC. Just to the left are pictures from 1924 -- the photos are blowups from the book, his high school yearbook. 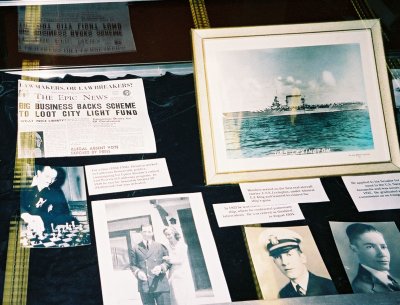 1929 to about 1937. Lexington is on the far right, flanked by photos of Ensign Heinlein and Lieutenant Heinlein with Leslyn shortly after their marriage in 1932. A copy of EPIC News is at top left. The picture of Heinlein playing chess dates from the period of his involvement with EPIC, about 1937. 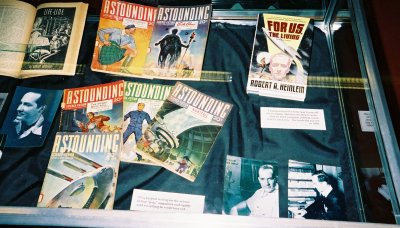 1939 to 1949. The old Astounding covers gives great color and interest to the displays. 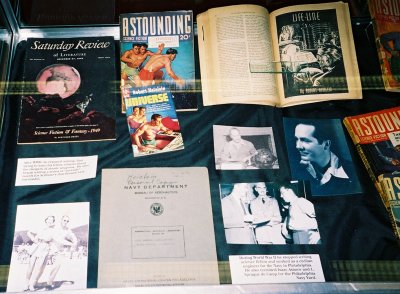 1939 to 1949. The open pulp is Astounding with Heinlein's first story, "Life-Line," in August 1939. In addition one of several versions of the famous picture of him together with L. Sprague de Camp and Isaac Asimov at the Naval Air Experimental Station in Philadelphia, there is a copy of one of his wartime reports on developing plastics for aircraft canopies. The Saturday Review contains his 1949 review of The Conquest of Space: "A Baedeker of the Solar System" 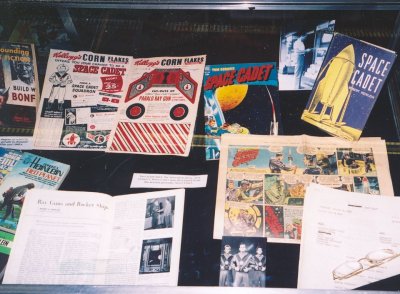 Early fifties -- note the Kellogg's Corn Flakes box with its Tom Corbett Space Cadet cutout ray gun. Heinlein did not realize anything from the merchandizing on Tom Corbett, which turned into a national craze in 1953. 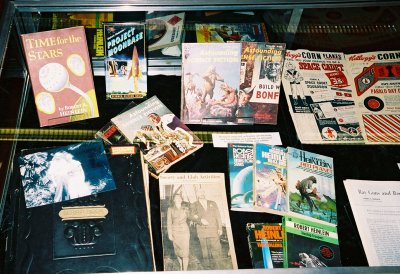 Mid-50's. Ginny started out making highly detailed scrapbooks of their travels, but soon gave it up. As you can see, it was a lot of work. The photo of them together was taken from her scrapbooks of the 1953-54 World Tour reported in Tramp Royale and is a newspaper clipping of them in Hawaii on the way back to Colorado Springs, about March 1954. 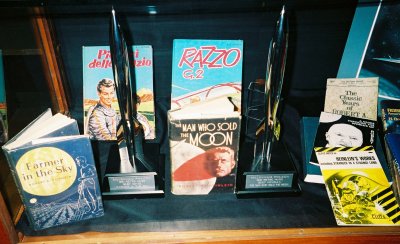 Two of the Three RetroHugos for 1950 awarded in Philadelphia in 2000: "The Man Who Sold the Moon" novelette, and Farmer in the Sky for Best Book. 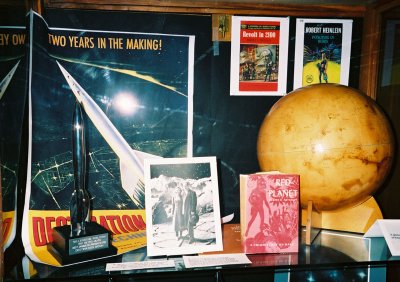 Destination Moon has its own display. Note the foreign editions of the book, particularly the Italian edition of Farmer In the Sky.

And Destination Moon has its own set-up, completely with lobby card and the Cafe Margo demi-poster of Robert and Virginia on the set of Destination Moon.  Oh, and the Retro-Hugo, too! 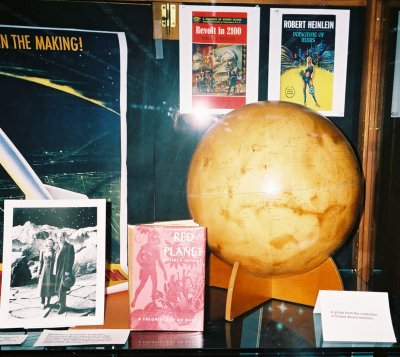 Heinlein collected planetary and sky globes. His post-Mariner Mars globe fills out the shelf, together with the special library edition of Red Planet which Scribners' started issuing in the early 1960's. 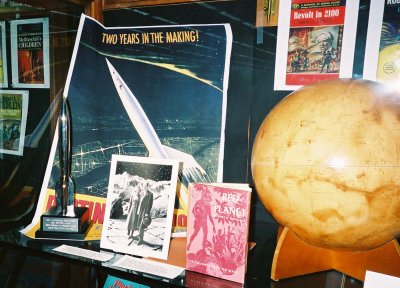 Another view of the Destination Moon display