Frontpage, Paying It Forward News, Updates, Volunteers and Special Thanks

John Tilden, known as JT on the long-running Heinlein Forum (now on Facebook), has stepped in to serve as a board member of the Heinlein Society and as Treasurer. 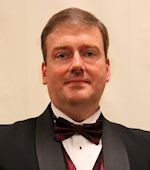 John was born in New York and currently resides near Baltimore, Maryland. He first  encountered Robert Heinlein’s work as one of the cool books with the “atom” sticker on the spine in the library’s fiction section. After college, he read the uncut Stranger in a Strange Land for the first time and was prompted to go ‘online’ to the new Prodigy network to see if anyone else wanted to discuss Heinlein. He found a simple subject line entitled “Heinlein Forum” and posted a reply. Over twenty years later, the discussion of Heinlein’s work is still a pretty good way to meet interesting people online and in-person.

John works for the federal government as a mid-level IT security professional. He has served on the board of his local community association and is still its webmaster. He spent eight years on the national board of his fraternity, Alpha Sigma Phi, and serves as his chapter’s Alumni Association President. He is married with two sons. He enjoys collecting comics and practicing Okinawan Goju-ryu karate.

John is a charter member of the Heinlein Society and has volunteered at blood drives and local conventional panels. He was also pleased to attend and help out in a small way with the Heinlein Centennial effort, including a panel presentation about Heinlein Fandom Online that was unfortunately scheduled opposite a Spider Robinson talk. He was elected to serve out a term in 2012 as Treasurer of the Society.

Thank you, John, for volunteering and Paying It Forward!