Note: The below account was written in 2007, days after the event in question. Excerpts have appeared here and there, but this is the first time the entire piece has been published.  –Geo Rule

Well, first you have to understand that I met my tundra blossom (this is what a California boy calls a Minnesota girl) in Prodigy’s online Heinlein Forum in early 1992, and Deb and I have been married since 1995. None of the rest of my Centennial weekend really makes much sense without those basic facts to revolve around. Even back then we had one eye on this weekend, and there was never any doubt about where we’d be.  Robert’s boyhood home of Kansas City, Missouri, with his birthplace of Butler just down the road a piece, was always going to be ground zero for us this weekend. Any time the subject came up, and possibilities explored, our contribution to the discussion was always the same –“Dunno where you’ll be, cobber, but you’ll find us in Kansas City even if we’re the only ones there.” Happily, we most certainly weren’t “the only ones there”, and below is my trip report of what I took to calling “just partying with 600 of our closest friends”.

We arrive from Minnesota (yes, Minnesota girl won that one eventually) by car Thursday afternoon the day before the con officially started. While standing in line to talk to the concierge at the Hyatt (most of the programming, it turns out, will be at the Hyatt), we notice Peter Scott, one of the organizers, standing there as well. We chat for a bit, and it comes to mind that we first met Peter at ConJose in 2002, on a Society-organized trip to the Heinlein archives at UC Santa Cruz. Given one of our major tasks here this weekend is to launch the online version of the Heinlein archives, the feeling of having completed a cycle is pretty strong.

After checking in, we head on over to the Westin (the second hotel, and where most major events and the dealer room is located) on what the locals call “the Link”, a glass enclosed skyway connecting major portions of downtown Kansas City. Many of the convention goers will start referring to it as “the habitrail” or even “the greenhouse”. Yep, KC in July is darned hot and muggy, and even with air conditioning every few feet, “the Link” is quite toasty most of the weekend. We run into Keith Kato, another of the organizers, on the way. “How’s it going, Keith?” “Up to my ass in alligators!” “Well, when they get to your chin, sell!”

We make it over to the Westin, and get registered without incident (badges 1051 and 1052, with numbering having started at 1000). However, “Gala Dinner Tickets” are running late, and these we will have to return for at a later time. It actually turns out to be Saturday afternoon for those, but “JIT dinner tickets” don’t cause us any particular hardship. 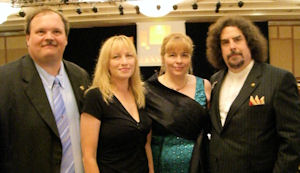 We spot Jim (another of the organizers) and Audrey Gifford, and now “old home week” is really getting into gear, as Audrey is also one of the Heinlein Forum originals from the early days on Prodigy before there even was a “World Wide Web”.  The funny story there is Jim and Audrey met at a Heinlein Forum lunch in Sacramento, CA that I organized in the spring of 1994. Fast forward to 1997, and Deb and I made arrangements to go see the new Starship Troopers movie with Jim (let’s not talk too much about the movie, ‘kay?), and he shows up with a date we weren’t expecting. Not having heard her talk yet (I’m actually better with voices than faces), I whisper to my wife, “She looks a bit like Audrey, doesn’t she?”, and the lady, having overheard me, responds with a voice I recognize (honest!), “I am Audrey, you idiot!” Yep, Heinlein Women –I’m just grateful they let us share the planet with them.  Not too long after the movie double-date there was a wedding that included a reading from Glory Road.

We spot David Silver, president of THS, chatting up some folks near registration and stop to say ‘hi’. Madam Secretary Jane is there as well, bubbly and bustling as always.

Next, we head into the pre-convention reception which will feature a reading from Robert’s biography by its author, Bill Patterson.  Say hi to Bill, and run into Robert James, PhD as well.  “Doc” James is another Heinlein scholar and educator, and provided lesson plans for both Tunnel in the Sky and Have Space Suit –Will Travel which are included on the Society’s Educator’s CD (all you teachers and librarians reading this have one of those, right? They’re free, you know, and can be requested from the Society’s website). He’s also nearly the exact same age as I (one of us is about a month older than the other, and I honestly don’t remember which), with the result that we have very similar experiences in how we encountered the works of Robert Heinlein.

As we sat waiting for Bill to start reading, I noticed another gentleman at our table –J. Neil Schulman, the author/editor of The Robert Heinlein Interview and Other Heinleiniana. I’d first downloaded Neil’s book electronically from a dial-up bulletin board in the early 1990s before it had been published in hardcopy, and then reviewed it in The Galactic Citizen, official organ of the Heinlein Forum that Deb founded and edited for a few years. So of course I had to say ‘hi’ to Neil, this being the first time we’d met in person, though we’d been having the occasional electronic correspondence for more than ten years.  Having just settled back from chatting up Neil, a hand taps me on the shoulder. The owner of the hand is J. Buckner Hightower, one of the trustees of the Heinlein Prize Trust. He wants to introduce himself to Deb and I, as he’s another member of the extended network of Heinleiners that we’ve talked to and worked with electronically that we are now getting to meet in person as well.

Are you getting a sense yet of the aura of a family reunion? Good, because that aura permeated the event from beginning to end –this was the family reunion of Heinlein’s Children and descendants, and if not every single cousin was there, at least enough of us were to make that a credible description. I promise I won’t inflict on you the name of every single person we met or talked to that weekend, though the name dropping will continue to give you an accurate sense of the variety of Heinleindom assembled.

The day ends with us catching up with Audrey and Jim over dinner; Audrey is delightfully Audrey, as always, and Jim has an advanced case of “senior convention staff twitch” as successive unresolved tasks force their way to the top of his consciousness one after another.

Next: Heinlein Centennial – Day One