a biography by
Robert James, Ph.D.

Virginia Gerstenfeld Heinlein was born April 22, 1916, in Brooklyn, New York, the daughter of a dentist. She went to the Packer Collegiate Institute, a college preparatory high school, where she finished in three-and-a-half years, always on the honor roll. She attended New York University, majoring in chemistry. She lettered in swimming, diving, basketball, and field hockey. She also reached national competitive levels in figure skating, the sport that became her lifelong passion. In the late 1950s, she served on the U.S. Olympic Committee for Skating. In time, she came to speak over seven languages, including French, Latin, Italian, and Russian.

Graduating in 1937, she worked for Quality Bakers as a chemist until 1943, when the WAVES was formed. She enlisted immediately and was commissioned as a WAVE lieutenant, serving first at the Bureau of Aeronautics, then at the Naval Air Experimental Station in Philadelphia in 1944 and 1945. She met Robert Heinlein there, working as a civilian aviation engineer because the Navy would not overlook his medical discharge due to tuberculosis in 1934. She served as his assistant on several classified development projects as a chemist and aviation test engineer.

After World War II, she came to Los Angeles to study for an unfinished doctorate in biochemistry at UCLA. She married Robert Heinlein in Raton, New Mexico, in October 1948. Thereafter, the two were inseparable; those who knew them spoke often of their intense and abiding love for each other. She became his closest companion, aiding him in his writing, and traveling the world with him. Virginia shepherded Robert through two severe near-death illnesses in the seventies through constant care and love. She took over the business aspects of his writing career, freeing him to focus on his writing. Together, they made a special project of organizing local and national blood drives and facilitating cooperation among all the blood collecting organizations in the world.

Shortly after his death in 1988, she moved to Florida. She gathered a selection of her husband’s letters in Grumbles from the Grave, printed for the first time his travel memoir Tramp Royale and political handbook Take Back Your Government (originally titled How to Be a Politician), and oversaw the restoration of several texts she felt had been badly edited, including Red Planet, Puppet Masters, and Stranger in a Strange Land.

Throughout her life, she loved reading, cooking, gardening, music, and politics. In recent years, declining eyesight and physical health curtailed some of her favorite activities, but she began and maintained an active presence on Internet venues devoted to study of her husband’s works, pursuing this new hobby with much energy.

She endowed the Robert Anson Heinlein Chair in Aerospace Engineering, established on August 28, 2001, at Annapolis, by a gift of over $2.6 million, in honor of her late husband, a graduate of the Naval Academy’s Class of 1929.

She also helped to found The Heinlein Society, an educational charity dedicated to paying forward to generations to come the many Heinlein legacies.

She also endowed the public library in Robert Heinlein’s birthplace of Butler, Missouri.

Readers have often remarked on the strength, intelligence, and power of his female characters; his fictional women were often based on Virginia Heinlein. As science fiction writer Spider Robinson said, “several of Heinlein’s women bear a striking resemblance to his wife Virginia.” Many of Heinlein’s books were dedicated to her. Virginia, or “Ginny” as she preferred to be called, was his sounding board and source of ideas; she originated the idea that became Stranger in a Strange Land. She was his first reader and trusted critic. Robert Heinlein once said she was “smarter, better, and more sensible than I am.” In a 1961 letter, he said, “She is what I feel to be a good person in the word’s simplest and plainest meaning. Which includes lashing out with her claws on some occasions when others may consider it improper. I don’t give a damn whether Ginny is ‘proper’ or not; I like her. I like her values.” At the end of one of his later books, Job: A Comedy of Justice, the final sentence has been read by many as Robert Heinlein’s own tribute to his beloved wife: “Heaven is where Margrethe is.” 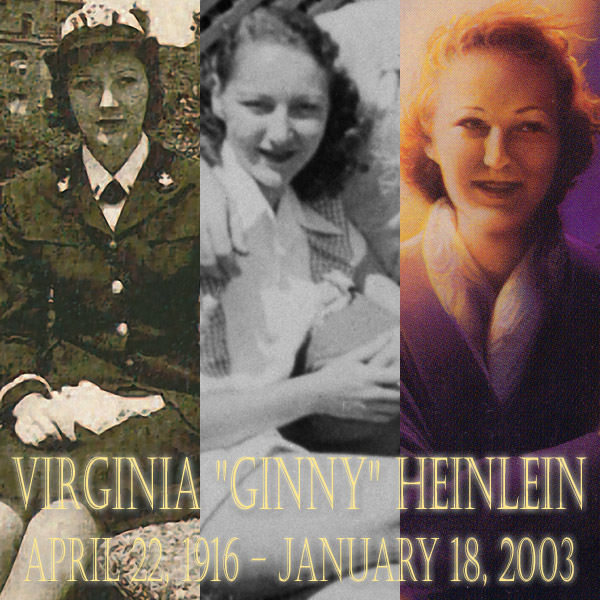 Tweet
0
The Heinlein Society is a 501(c)(3) charitable organization. Your donations are tax deductible.