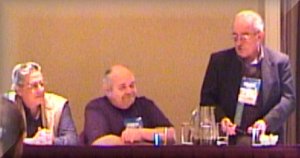 We held the Annual Corporate General Membership Meeting at 1PM, August 29, 2003 at the Royal York Fairmont in Toronto, Canada, with eighteen members, and three directors, Alan Milner, Charles N. Brown, the publisher of Locus, and myself (David Silver) physically in attendance, and one, Dr. Kondo, present by power of attorney to me, and one non-member visitor. Joe Haldeman had been scheduled by Torcon for a panel and a luncheon that conflicted, before he had been elected as a director, and I expressed his regrets conveyed to me at his not being able to attend.

Bill Patterson had gotten hung up in a transportation glitch, so I expressed his apologies for missing Torcon as well, and I presided at the meeting.

The Minutes were approved as read. My Secretary Treasurer’s Financial Report was given and commented upon. We conducted our annual Election of Directors whose terms were expiring. Charles N. Brown was unanimously reelected to a three year term. I surrendered the gavel to Mr. Milner, and while he presided I was reelected to another three year term as well. Both Mr. Milner, before he surrendered the gavel, and I each introduced and commended all those Committee Chairs who were present, including Mike Sheffield, who has done a wonderful job on blood drives this year, Peter Scott, who equally has worked hard on plans for the 2007 Centennial celebration, Geo Rule, whose efforts to organize the scholastic/academic committee are laudable, Keith Kato, who has saved us much time in arranging for social activities, and Jane Silver, whose membership services efforts have been especially fruitful, as demonstrated by the much improved dues payments situation since she took over the job.

We also introduced, thanked and commended Dr. Amy Baxter, Ginny’s ‘adopted’ granddaughter, who was present with her husband, Dr. Louis Calderon, also both members of the Society, and who did so much to ease Ginny’s last illness. After thanking those present, we adjourned the meeting.